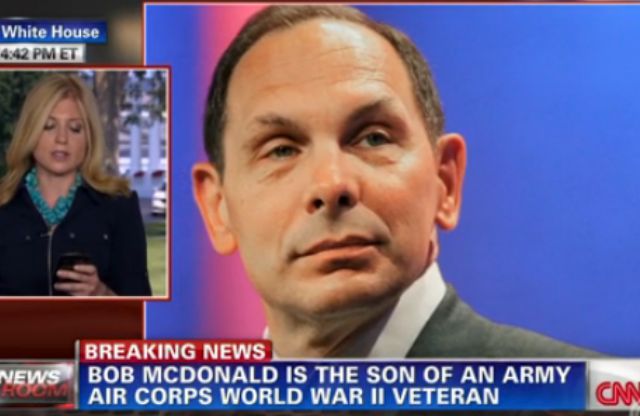 President Obama is expected to announce former CEO of Procter & Gamble Bob McDonald as his pick to head the Department of Veterans Affairs.

President Barack Obama has chosen former Procter & Gamble Chief Executive Bob McDonald, an Army veteran, as his nominee to be the next secretary of veterans affairs, a senior Obama administration official said on Sunday.

Obama’s announcement of McDonald, 61, will be made this week, possibly on Monday. If confirmed by the Senate, McDonald would be tasked with repairing the Veterans Administration after widespread evidence of delays in military veterans getting healthcare at VA facilities.

The announcement is to come days after a White House review found significant and chronic failures across the board at the Veterans Administration and evidence that a “corrosive culture” prevails.

If confirmed, McDonald would replace Eric Shinseki, who resigned in late May after significant problems at the VA, including secretive wait lists, became highly publicized.

McDonald graduated from the U.S. Military Academy at West Point, N.Y. in the top two percent of his class and served in the Army for five years, according to the Washington Post.

But it is his corporate experience that is said to be of most interest to the White House.

McDonald is an unusual choice for an agency that has typically been led by former military leaders, but given the agency’s bureaucratic and managerial challenges, he is seen by the White House as the kind of corporate leader the agency needs. His experience makes him “prepare[d] … well for a huge agency with management challenges,” the[White House] official said, adding that he is “the perfect person to lead the Department of Veterans Affairs during this important time.”

Herman Cain took a company on the verge of bankruptcy and made it profitable again. Haven’t heard that P&G had any bad problems. Cain would be a better choice. So would Col West.

“But it is his corporate experience that is said to be of most interest to the White House.”

He’s not a community organizer?

Hasn’t spent his life on the public dime?

How will he know what to do?

Is it just me or does that guy look like Vladamir Putin?

Who can we sincerely thank for making a rational decision here? Clearly, the jug-eared fool is’t capable of making one.

He’s not exactly not military with a veteran father and graduating at the top of his USMA class. Hope he still comports with his pledge: “A Cadet will not lie cheat steal or tolerate those who do.”

Probably an expert at out sourcing/Automating jobs by robots taking over 45% of American Jobs by 2025. P&G is one of the biggest and oldest NWO company we never hear much about. Yep, it’s all true with illegals/children being our new low calorie sex,all purpose slaves just ask Condi about all of that ” fresh,young blood America needs”. 80% of NY HS Blacks graduate illiterate and that’s just last year. The Education Bubble scam by Peter Thiel about 6 + years ago and now it’s game,set,match. Yep, funding loans for worthless degrees that only get your first job. Literally just wasted paper as a ” formal Commie education often is a barrier to learning and real life/business ” shock”…..

His job is to make health care via government bureaucracy work. Good luck with that.

Just more window dressing as Obama pretends to ‘address’ the problems. He’s proven conclusively that he doesn’t care unless it started to make him look bad. He didn’t fire Shinseki for his failures. He fired him when public opinion FORCED him to.

This is more bullshit smoke and mirrors as Obama hopes this drops off the media radar.

You know what would make me believe that anybody is actually interested in fixing the VA?

1) Every VA employee that filled out a fraudulent report needs to be FIRED. No pension, no severance. They not only failed to do their duty, they were intentionally and criminally negligent.

2) Every supervisor of a VA employee that filed fraudulent reports needs to be FIRED. No pension, no severance. If they had been doing their due diligence, this problem would not have happened.

3) A hard deadline needs to be established for wait times. No more of this bullshit ‘Every veteran will be seen within X days! Except if they aren’t, nothing happens and the veteran is forced to sit and wait until they get around to him’. Whatever the deadline is, it needs to be HARD. A 24 hour reporting center needs to be established, and if any veteran is forced to wait longer than the deadline, they can inform the hotline, and the manager of the facility will have to respond, IN WRITING, why they failed to meet their obligations.

If those measures are put in place, MAYBE I’ll believe they are actually interested in fixing this travesty of a system.

There is but one solution for the VA – Remove VA hospitals from under government controls and if they cannot compete in the private sector, close them. No, on second thought, close them all right now.

In this day and age, it makes no sense (and it probably never did) to operate physical hospital facilities and to force vets to travel hundreds of miles for medical care. A magic VA ID should make such trips unnecessary – FOREVER.

Having worked at three different VA hospitals, my plan would be simple —

1) every vet with 20+ years of service gets a VA paid bronze plan for use at any hospital / clinic.

2) every service connected (>50%) vet gets a VA paid platinum plan for use at any hospital / clinic.

3) keep the rehab (prosthetics) and psych outpatient clinics; they do good work and are very much needed.

Of course, you’ll have to contend with the entrenched public employee unions that represent all the VA hospital and clinic workers.

“Of course, you’ll have to contend with the entrenched public employee unions that represent all the VA hospital and clinic workers.”

Well, here’s a way: close down their operations and stop sending their pay. They will get the idea sooner or later.

Fox News did a piece on this guy and his background. Three year stint at P&G wasn’t good. Congress might have a few questions for this fine fellow:

“McDonald, 61, is a native of Gary, Ind., who grew up in Chicago. He was at the helm of Proctor and Gamble — a Fortune 500 company with more than 120,000 employees — from July 2009 to July 2013. While there, he was known for trying to make steep cuts to the company’s large staff, but was also replaced last year for various reasons.

Under McDonald’s leadership, the company struggled to grow under increased competition and global economic challenges. Critics suggested he was having trouble getting the 150-year-old-plus company to fire on all cylinders.”

Thanks for posting actual information about this guy. He doesn’t, offhand, sound like a turnaround agent.

The VA is beyond reform. It has been hopelessly corrupt and inefficient, and has delivered delayed and often substandard care except for the period immediately following WWII when there were surpluses of trained doctors, nurses, and corpsmen to provide it.

In San Diego and Phoenix (the only markets surveyed, it is probably the same or worse everywhere), a single cardiologist in private practice treats MORE patients than EIGHT on the VA payroll.

It is throwing money down a rathole to even try.

It’s a safe bet that McDonald wasn’t hired for this job because he was a Romney campaign funds bundler. I wonder how much he raised or donated to the Obama campaign.

There are probably a half-dozen former generals and admirals who would be well qualified to head the VA, and who have the required management skills for the job. Any of them would have been a better choice, I think.