“It’s all geared towards the next election or ginning up a base.” 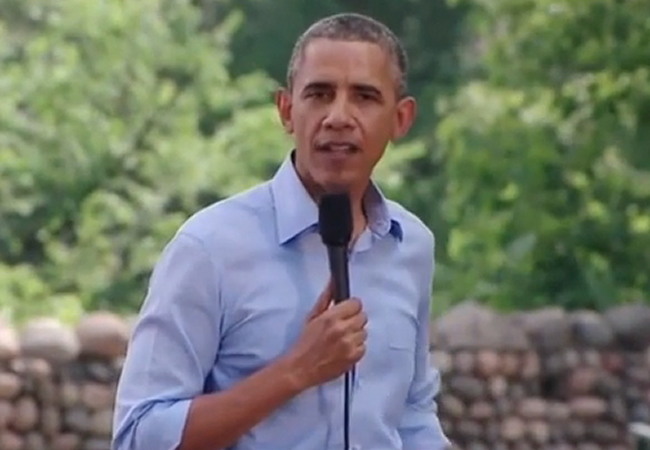 Obama made a public appearance in Minnesota on Friday which Neil Munro of the Daily Caller has described as a pity party:

President Barack Obama’s June 27 effort to boost the flagging morale of his supporters quickly devolved into a demoralizing pity party.

Republicans “don’t do anything except block me and call me names,” he told supporters, only a few days after it was revealed that his economy shrank 2.9 percent in the first three months of 2014.

“If we make some basic changes, we can create more jobs and lift more incomes and strengthen the middle class… I know it drives you nuts that Washington isn’t doing it,” he said. “It drives me nuts.”

The president also went back to dismissing the many scandals engulfing his presidency as phony.

President Obama warned people in Minnesota Friday not to believe what they hear on television:

“They’re fabricated issues, they’re phony scandals that are generated. It’s all geared towards the next election or ginning up a base. It’s not on the level,” the president insisted.

I don’t — I don’t watch TV news generally, or cable shows, but I suspect if you’re out here and going to work and picking up your kids and taking them to soccer or at night sitting there paying the bills, and you just turn on the TV, sometimes it must feel kind of discouraging because it doesn’t feel like what’s being talked about in Washington has anything to do with what’s going on in your lives day-to-day. And it must feel as if sometimes you’re just forgotten.

And sometimes the news that’s being reported on is really important. I mean, what’s happening in Iraq is relevant. We got to pay attention to the threats that are — that are emanating from the — the chaos in the Middle East, although I want to be very clear: We’re not sending combat troops into Iraq — because that’s — we’ve done that and we — we’ve given them an opportunity, and they’re going to have to contribute to solving their own problems here, although we’ll protect our people and we’ll make sure that we’re going after terrorists who could do us harm.

But sometimes, the news that’s coming off is just — these are just Washington fights. They’re fabricated issues, they’re phony scandals that are generated. It’s all geared towards the next election or ginning up a base. It’s not on the level. And that must feel frustrating, and it makes people cynical, and it makes people turned off from the idea that anything can get done.

Poor Mack Daddy Obama. I don’t want to feel your pain. The day of reckoning is fast approaching.

0bama: …we can create more jobs…

For whom? More border guards to act as diaper changers? What an utter a-hole.

“And sometimes the news that’s being reported on is really important.”

But the news that ISN’T being “reported on” is a LOT MORE important.

And…sometimes…the black-out of news IS news…

Yes, they are all phony scandals, “phony” being a synonym for a potus Indonesian citizen with a social security number issued in Connecticut.

Next thing you know, he’ll “borrow the power” to silence all these mean people harshing his buzz.

Zero himself is a “fabricated issue.” He is as phony and made up as a three-dollar bill ~

Zero is like the sweet-talker who ends up giving you syphilis, except this time it’s TB. When are the Republicrats going to stand up to him, freeze up the House until the madness stops?

Phony scandals for a phony president.

He believes it’s phony because he sees nothing wrong with what he is doing.