Inviting students to study philosophers and their ideas! What a direct threat to safety! 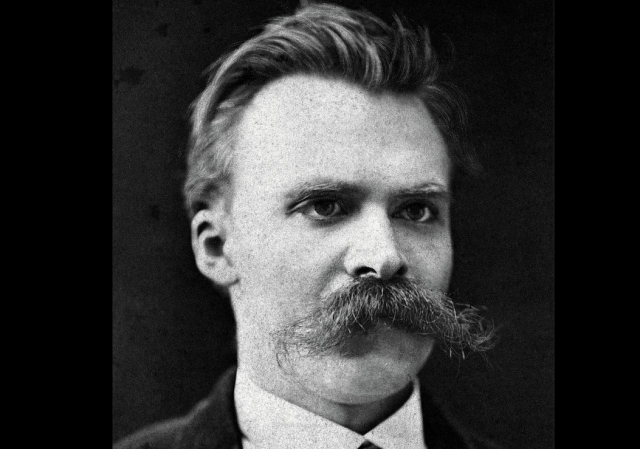 In the name of “a socialist transformation of society,” intolerant students at University College London (UCL) have violated the rules of their student union by banning a group calling itself the Nietzsche Club, after German philosopher Friedrich Nietzsche. The official resolution speaks for itself and might even violate British law.

According to Union Policy UP1343, passed earlier this year and available at the Union’s website, the UCL Union (basically the student government) officially believes that the Nietzsche Club “is aimed at promoting a far-right, fascist ideology” and must be stopped at all costs.

In case there was any question, UCLU adds that “there is no meaningful distinction to be made between a far-right and a fascist ideology” and that “fascism is directly threatening to the safety of the UCL student body.”

What is so threatening?

Fearsome posters on campus—which “advertise a study of the philosophers Nietzsche, de Benoist [no friend of capitalism], Heidegger and Evola.”

The horror! Posters inviting students to study philosophers and their ideas! What a direct threat to safety!

UCLU officially believes that these people “are on the extreme-right, racist, sexist, anti-immigrant, homophobic, anti-Marxist, anti-worker and have had connections, direct or indirect, with Italian fascism and German Nazism.”

Then the socialism comes in:

“fascism is used by the ruling class to divide workers and students … to split them and thus weaken their effectiveness as a force and undermine their resistance to … consequences of the crisis of the capitalist system.”

Then the intolerance comes in:

Then the socialism comes back:

[We] commit to a struggle against fascism and the far-right, in a united front of students, workers, trade unions and the wider labour movement, with the perspective of fighting the root cause of fascism—capitalism. Thus, the struggle is to be united under the programme of a socialist transformation of society.

Although the resolution clearly institutes a “ban” and promises “unconditional resistance” to any attempt of the group to even meet on campus, UCLU’s told me via twitter on June 4:

@AdamKissel It’s technically not banned – just not going to be affiliated with UCLU. If you do want to take this further, email @UCLU_DCO

But UCLU is not just some private organization of students choosing not to affiliate with a group it dislikes. At UCL, when the Union bans your group, your group misses out on specific campus benefits that affiliated student groups enjoy: funding, accounting and banking services, publicity services, access to rooms and other facilities, and more.

Now, I am far from an expert on British law, but I do feel rather confident that the UCLU is violating its own promises, besides fundamental principles of non-discrimination and freedom of association.

Incorporated under the Companies Act 2006, UCLU promises under its Articles of Association that

The Union will seek at all times to:

(i) ensure that the diversity of its Membership is recognised and that equal access is available to all Members of whatever origin or orientation;

(ii) pursue its aims and objectives independent of any political party or religious group;

(iii) pursue equal opportunities by taking positive action within the law to facilitate participation of groups discriminated against by society; [and]

(iv) foster and encourage the freedom of speech, expression, assembly and association amongst its Members[.]

UCLU’s Articles of Association also acknowledge that “Under the Education Act 1994, UCL has a statutory duty to ensure that the Union operates in a fair and democratic manner.”

Yet, UCLU’s policy to ban and actively thwart the Nietzsche Club on the grounds of socialism and anti-fascism violates its official promises of freedom of assembly and freedom of association. Furthermore, this policy violates UCLU’s Bye-Law 8, “Union Policy” (“bye-law” is British English for “by-law”):

No Policy can deny any group of members their rights and privileges as protected under the Memorandum & Articles and Bye-Laws.

Union Policy UP1343 does exactly this, and the 25,000 student members of UCLU should be ashamed of their leaders. Perhaps this is a learning opportunity that UCL President & Provost Professor Michael Arthur can capitalize on.

And it seems about time for a mission trip to England to share our more robust tradition of liberty with those who seem to have forgotten it. Look for me—I’ll be the one wearing a coonskin cap.

Adam Kissel lives in Arlington, Virginia, and is former Vice President of Programs at the Foundation for Individual Rights in Education in Philadelphia.

Ben Franklin proudly wore his coonskin cap when in France.

Seems like Europe, or at least the UCLU, could use a bit of stirring up, and memory jogging, from friends across the pond!

Wow. The ignorance and Soviet-era brainwashing fairly drips off those little morons.

The reason that fascist ideology and Marxism came to be at sword-points is they are first cousins of Collectivism. There is no more bitter feud than a family feud.

There is nothing…whatsoever…”capitalist” about any form of Collectivism, and the fascist flavor is the MOST dangerous to nations with a free market tradition and laws supporting property rights.

It never ceases to amaze me that people like these seem to have the memory and intelligence of a goose. They somehow think it is all transgressive and edgy to be enamored of a system that has NEVER performed as advertised, and has killed and ruined the lives of literally countless “common men”.

Exactly on point that reason the the Marxists and Fascists hated each other was due to competing for the same ideological space.

Also, so long as the Left continues to ascribe to Post-Modern moral relativism and, ironically, Nietzschean Will-to-Power, they will continue to abound in their grand Utopian ignorance.

Anti-Marxist? I’m anti-pedophile and anti-Marxist, and I consider the latter to be the more moral of the two.

So. If Nihilists are denied free speech does it really mean anything?

Yes, what difference does it make?

Interesting that they’re avoiding the “c” word, even though stuff like the crisis of the capitalist system, the united front of students, workers, trade unions, and fighting the root cause of fascism—capitalism is standard EuroCommunist-speak.

The jack-boot collectivists want to stomp out any discussions which may lead someone to an encounter with critical thinking. That would be a “no-no” on campus. Besides, for them there can be no truth but scientific truth (and the sincerest of feelings).

If UCLC wills to power and bans Nietzsche, they should also ban Wagner his musical mentor and, probably, Schoenberg and Stravinsky, too, but not cupcakes. Thus Spake ZaraLee

They’d also have to ban Mme. Blavatsky, Guido Lizst, Tibetan transcendentalism, free masons, and a whole bunch of things these little twerps don’t know about. But, you’re right, not cupcakes!

I bet most of these young inquiring minds also believe math is racist, sexist, homophobic and anti-Marxist and do everything they can to avoid math, science and engineering classes.

What these little bed-wetters are afraid of is that on the “Dress Like Your Favorite Philosopher Day,” the Nietzsche look alikes asking, “You want a mustache ride?” Glorious, glorious mustaches.

But really, they are the equivalent of the six year old sticking his fingers in his ears and singing while you explain the punishment he is receiving for not behaving correctly.

Let’s not let Nazi propaganda with respect to Nietzsche perpetuate here … he despised german national socialism so much as to claim to be a Polish immigrant. He was not a strict moral relativist in the vein of post-modernism, but a harsh critic of any morality that in anyway esteems weakness or disvalues the individual. Read the original.