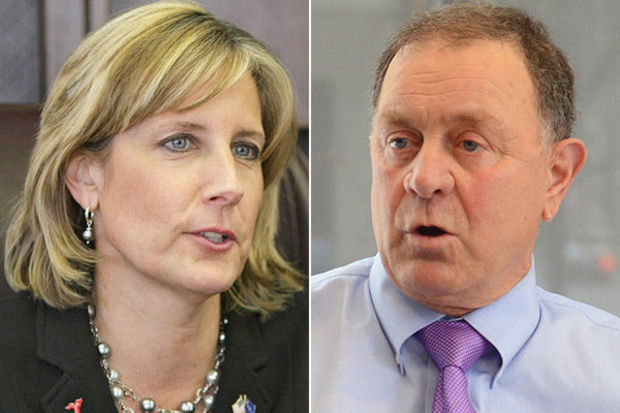 Story of #NY22 is that liberal Hanna wins by SuperPACs portraying him as more conserv than real conserv opponent http://t.co/ExcSqfjugV

Tenney says she's proud of results so far, comparing her grassroots, $150K campaign to the $2m in super PACs from Hanna. #NY22

The polls close at 9 p.m. Eastern. It’s incumbent Richard Hanna challenged by Claudia Tenney, in a race featuring over $1 million in anti-Tenney false flag attack ads by pro-Hanna SuperPACs. Click here for our prior coverage of this race.

Outside groups also spent millions smearing Lankford in Oklahoma, but that seems to have backfired.

So what have we learned tonight? That Progressive RINOs have no problem abandoning any sort of Conservative principals (if they ever had any) in order to desperately cling to their power.

Further, the Liberal RINOs are willing to lie outright to their constituents, and have others blatantly lie on their behalf, in order to advance the Progressive ideology. It’s time to make a CHOICE. Either abandon the Republican Party or get true Conservatives appointed to the Republican Committee in these upstate districts. Next cycle the Party should simply say “Hanna, you don’t QUALIFY to run as a Republican given your voting record, and we will neither endorse, nor allow you onto the Republican line. Go file as an Independent, or better yet, a Democrat, as that is where your loyalties lie.”

We will likely never win if we fool ourselves. Why does anyone believe that the false ads were the reason Hanna won? The voters in the district have been voting for moderates for years.

I am assuming turnout was between low and average. This means Tenney did not ignite the only place where our strength lies – in voters who normally do not come out and vote.

I myself think that local Tea Party participation is far weaker today, was far weaker in 2012, than it was in 2010 when it was strong.

The false ads argument is an interesting one for if it is true no one has indicated in what way it worked.

In 2010 in dozens upon dozen – if not a couple of hundred – local elections (Congress, state and local legislatures and elected positions) – in 2010 the Liberals and the Left just couldn’t get any traction.

It is unlikely that a stunt like the false ads would have worked.

I for myself do not think that did work – false ads weren’t the reason we lost. Hannah won because only the people who usually vote came out to vote.

Our strength always was and will be in large turnout where the people who agree with us come out in droves. The largest turnout elections are Presidential and in them normally 50% to 55% of registered voters come out to vote. When Reagan won 75% to 80% came out to vote.

The only primary election where we had a significant victory, of course, was the defeat of Cantor. And in that election – as Ann Coulter detailed in her column – turnout was significantly higher than the previous two Primaries that Cantor won.

In NY22 Hanna ran false ads painting himself as Conservative and more conservative than Tenney. I have not seen those ads, but I would speculate – and this only a speculation – that Hanna had a more focused strategy.

Given Hanna is a moderate and a Rhino, and given that his electoral successes means the electorate votes for moderates, I take it his ad campaign was to deny Hanna some votes of those who normally vote for him. So I am wondering if he painted himself with these ads as the safer Conservative.

But still we must remember that in 2010 I am sure all kinds of false ads were used against Tea Party candidates. To no effect.