Less than 10% of membership bothers to vote, showing that most academics don’t even care about anti-Israel agenda. 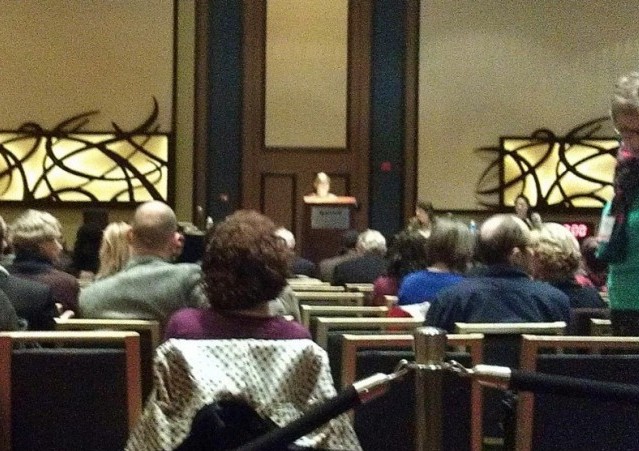 We previously wrote about a partial victory at the Modern Language Association House of Delegates during the annual meeting in January.  An anti-Israel resolution regarding alleged travel restrictions on academics was significantly watered down, and another resolution defending the American Studies Association’s academic boycott of Israel was rejected.

Whereas Israel has denied academics of Palestinian ethnicity entry into the West Bank;

Whereas these restrictions violate international conventions on an occupying power’s obligation to protect the right to education;

Whereas the United States Department of State acknowledges on its Web site that Israel restricts the movements of American citizens of Palestinian descent;

Whereas the denials have disrupted instruction, research, and planning at Palestinian universities;

Whereas the denials have restricted the academic freedom of scholars and teachers who are United States citizens;

Be it resolved that the MLA urge the United States Department of State to contest Israel’s denials of entry to the West Bank by United States academics who have been invited to teach, confer, or do research at Palestinian universities.

There were complaints that the MLA leadership was not evenhanded in distributing materials to the membership, to the prejudice of pro-Israel members. Also, an online chat forum was disclosed in which gross anti-Israeli and anti-Semitic statements were made by MLA members.

The results of the vote were just posted, and it failed to pass because less than 10% of the 30,000+ members voted.   Any resolution must be ratified by a majority vote in which the number of those voting for ratification equals at least ten percent of the association’s membership, which was 2,390 votes this year. There were 1,560 votes in favor of ratification and 1,063 votes against ratification.

This is, in many ways, even more devastating than a simple loss.  It shows that the anti-Israel agenda of some radical academics simply isn’t of much interest to the broader academic community.  The lack of interest by the overall membership is most telling of all.

Prof. Cary Nelson of the University of Illinois issued the following statement on behalf of MLA Members for Scholars’ Rights, a group opposing the resolution:

A VICTORY FOR RESPONSIBLE ADVOCACY—June 4, 2014

The Modern Language Association’s members have wisely voted to defeat Resolution 2014-1—with only 6% of members voting for it—and return the organization to its core purposes: deepening our understanding of our long, compelling, international literary inheritance; improving our resources for teaching our students; and promoting the role and presence of the humanities here and abroad. This is a task that grows larger and more challenging with every year, and it would only be made more difficult if we turned the organization into a vehicle for the partisan politics of a minority of its members.

At least for now, that destructive agenda has been rejected. Indeed most MLA members were so opposed to the resolution and the attempt to politicize the organization that they refused to vote at all. But continued vigilance is essential. This resolution might have won approval had it not been for the hard work done by MLA Members for Scholars’ Rights. MLA rules require only that the evidence supplied by a resolution’s proposers be distributed to voting members. That meant that the MLA distributed a resolution criticizing a foreign country’s visa policies to 28,000 people with a packet of supporting “evidence” cobbled together from the web sites of partisan political organizations. No counter-evidence—only an online member debate offering a wide range of opinion—was sent out with the link to the ballot. With no support from the MLA, MLAMFSR (http://scholarsrights.wordpress.com/about-us/) sent out a fact sheet to the 20,000 member emails made available in the MLA directory, assuring that at least those members had access to a critical set of facts. Regrettably, the MLA then objected to our having done so.

In our opinion, the MLA needs to revise its procedures to make certain that controversial resolutions are accompanied by evidence recommending both for and against approval. We believe that, given the opportunity, MLA members would overwhelmingly endorse such a change.

There are times when the MLA has a reason to enter political debates—most notably when US government policy affects its members’ ability to teach and do research. But MLA does not need a foreign policy. In this case, a resolution’s proposers imagined themselves qualified to judge how another country’s security needs should impact that country’s visa policies. Anecdotal evidence, largely disproven by MMFSR, was offered in place of the careful investigative research needed to address such an issue.

Had MLA members endorsed the resolution, they would have been disowning the standards for research and informed advocacy that have guided the academy throughout modern history. Meanwhile, the organization has sadly suffered the public display of religious and ethnic bias that a few of its members indulged in during the online debate over the resolution. The risk of that happening was high from the outset, from the moment the resolution’s proposers decided that one country’s visa policies should be singled out for criticism, despite similar and worse rules obtaining elsewhere. The resolution’s proposers and its supporters chose not to distance themselves from the racism and anti-Semitism that their initiative attracted.

Whether a sufficient lesson has been learned by this experience remains to be seen. While we hope so, we will remain attentive to future developments.

“Right to education” means the right to let in outside agitators?