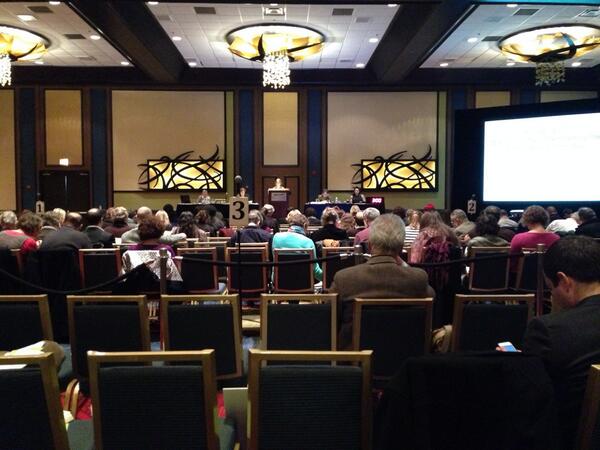 The Modern Language Association House Delegates voted on two anti-Israel Resolutions today. (The Resolutions are at the bottom of this post.)

We will have a post later from someone who was in the room. For now, I will post some of the Tweets from those in the room. Notice that there was significant pushback, and that the supporters of the resolution basically said take our word for it, when challenged as to the proof. That apparently was enough.

The second resolution was an “Emergency” Resolution asking the MLA to denounce supposed attacks on the supporters of the American Studies Association boycott resolution. That Emergency Motion, which actually was explicitly pro-boycott, was rejected.

(Added) It needed 75% to be considered, and it fell short so it never went to a vote on the merits.  This is big blow to the boycotters, as they have been playing victim with regard to criticism, and surely would have liked the MLA to come to their aid. However, Inside Higher Ed reports that the second resolution still will be “referred” to the Executive Committee, so it will be interesting to see if the Executive Committee approves a resolution never even considered by the House of Delegates.

Note also that barely half of the total delegates were present for the vote. There was barely a quorum.

Considering how many months (years) the BDS academics spent preparing, and how little time the opposition had, this is something of a victory.

So anti-Israel crowd barely wins on a minor issue vote, then loses big 59-41 to even consider an emergency anti-Israel pro-BDS resolution.

#MLA14 @MLA exec council says substitute resolution "too close" to prior resolution on academic freedom of movement. Denied a vote.

Parliamentary confusion at #mla14. This debate over time for discussion is a total mess. pic.twitter.com/YoaXYXYGgU

If you are missing Delegate Assembly it's like the worst faculty mtg you ever attended, times 1 trillion, to the Israel power. #s544 #MLA14

This #MLA14 anti Is resolution debate is a mess. Poor management of parliamentary rules/process.

#MLA14 Nathan Brown UC Davis argues against the rhetoric of needing more details is in fact a rhetoric of oppression.

"We criticize Israel bc of that special relationship [w US] … There are responsibilities that come w that privilege," Samer Ali #MLA14

#MLA14 Samer Ali's speech was a case study of the Walt/Mearsheimer view of history, with an unforced error that GOPers kowtow to Egypt. Huh?

#MLA14 delegates argue that resolution is not good for MLA nor helpful to Palestians, too complex insufficient proof

DAOC rep for #MLA14 says case studies presented by anti-Is advocates were not useful in substantiating the resolution language.

Ohmann goes first says #MLA14 anti-Israel resolution is not a #BDS effort. "This is false, this is insulting… and I wld like an apology."

#MLA14 Cary Nelson responds "An apology?" Not in this life."

128 voters in the room now at #MLA14 delegate assembly.

#MLA14 Cary Nelson: "you have to act like scholars.This is a biased resolution & part of a long term effort to discredit Israel. No apology

G. Furr, lead name on emergency #MLA14 res in his own words. Mission seems to be showing Stalin better than thought.http://t.co/zaCeFrpMdb

We are at #MLA14 delegate assembly … Let's see how this vote goes. pic.twitter.com/YcEbQNGePL 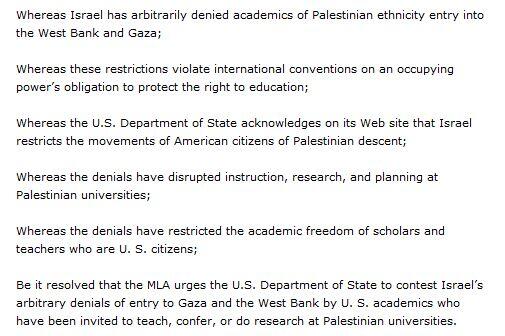 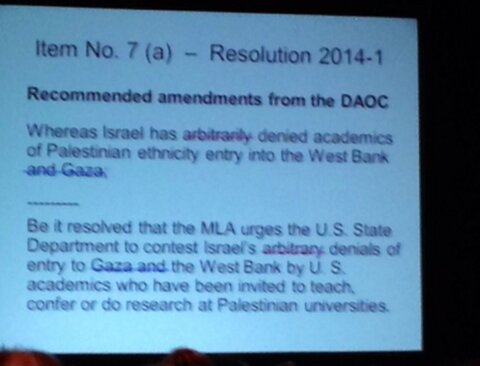 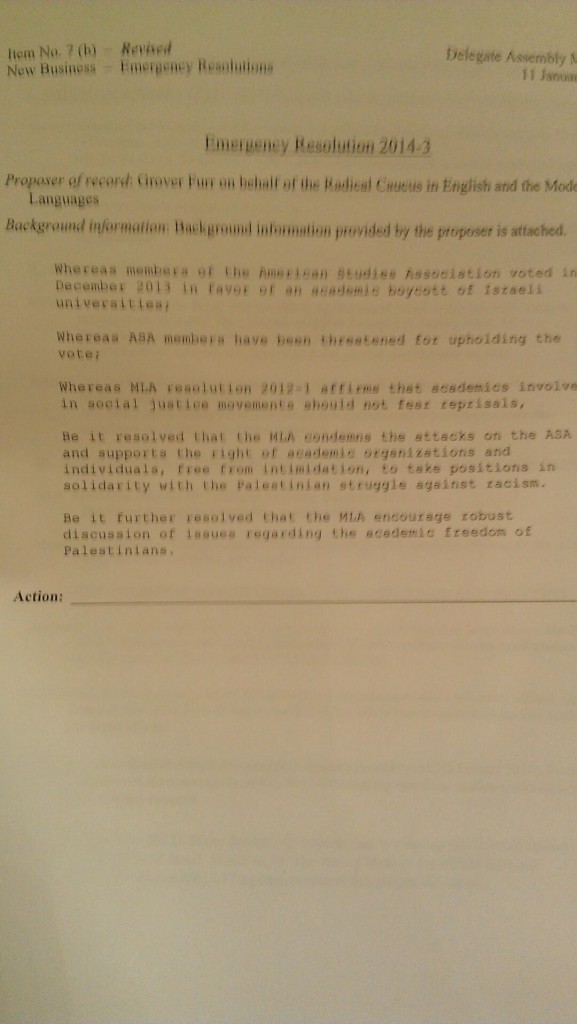 NOTE: The title of this post was changed shortly after publication.

So the MLA narrowly passed a non-binding resolution stating they want the State Dept. to investigate when the Israeli State Dept. (or whatever it is called) denies visas.

I wish the scrotum-less idiots good luck with that.

Sounds like the MLA only did something to appease the anti-Israel faction because they didn’t have the cojones to tell them to bugger-off.

Absolutely gutless, but that’s our leftists.

They pay some lip service, and chicken out to save themselves.

But without the heightened scrutiny brought on by Professor Jacobson and others, you know they would have happily joined the boycott with no fear of reprisal – or even much attention outside the circles of the anti-semitic left – and their support would be cited in later years as evidence of how “mainstream” those views are.