Updates throughout the night until a winner is declared. 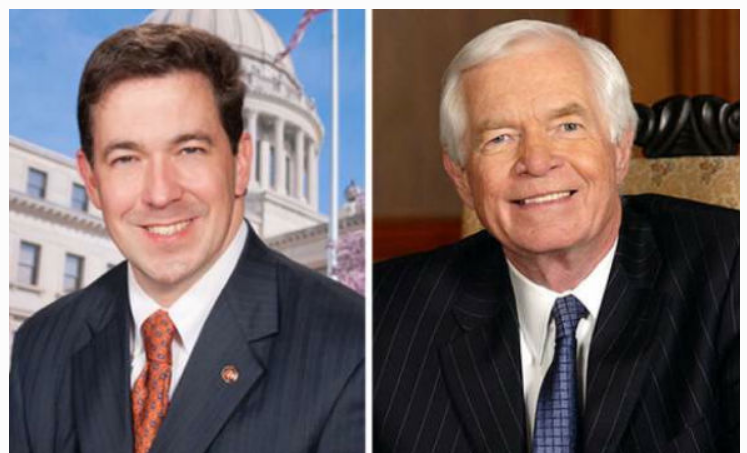 What a long, strange trip it’s been. Click here for our prior coverage of this race.

Professor, thank you for this live feed on the Mississippi senatorial race. There is also a very important race in Colorado for governor, in which Tom Tancredo is a real contender for the GOP nomination. As you know, he has been working assiduously against illegal alien immigration.

Here is a link to the Colorade SOS election results. Unfortunately, the governorship results aren’t until page 3 or 4r. I haven’t been able to figure out how to get a link just to those results.

Charles C. Johnson has audio of a radio ad and an interview with a very foul-mouthed woman who said she was paid to vote, over at Twitter @ChuckCJohnson

Radio ad: “If someone tells you that by voting today, you cannot vote in November—it’s just a Tea Party, bald-faced lie. Are you going to let the clock run out on today? By not voting, you are saying take away all of my government programs…. Vote against the Tea Party, vote for Thad Cochran….”

Excellent find. Thanks. Anybody know who paid for those radio ads?

This is by crook, all the way. I can see it coming.

At least, MS isn’t my state.

I am shocked, shocked to find out that a Liberal Republican pos would benefit from Democrats voting in an open primary. Even though another website states that it is illegal to vote in a primary for a person they wouldn’t support in the general election. Lawlessness by Liberal Republicans and Democrats, who would have thunk it? The GOPE (Grand Old Party Establishment) would rather lose to a Democrat than have a conservative win.

In Colorado a group dominated by staffers from the Romney campaign ran anonymous ads against Tom Tancredo. That was all I needed to hear for me to vote for Tom.

It’s hard for me to have much sympathy about a law that inherently cannot be enforced because of secret ballot voting. If there’s a problem here, it’s with allowing people who don’t at least register as Republicans to vote. But banning that would eliminate the opportunity for all sorts of shenanigans to keep incumbents in power, and who wants that?

There is no such law, it is nonsense.

Mississippi, like most Southern states, does not register voters by party. You may vote in either party’s primary in any year, but you cannot then vote in the other party’s runoff.

That is the only restriction.

I don’t know how they do it in Mississippi, but in South Carolina, the voters who voted in the other primary are automatically lined out for the other party runoff.

About that. I’m hearing some very interesting things from a close friend of mine (an interested Floridian). Apparently quite a few of the Democratic supporters who crossed over to vote for Cochran already voted in the Democratic primary on the non-runoff primary day three weeks ago. If, and not knowing the state laws, I emphasize, if that is illegal under Mississippi law, then things suddenly get very interesting indeed. You can just compare who voted without going into how they voted and lop off the second, illegal vote…

But you can’t take away their vote, because we don’t know which vote it is, ie Cochran or McDaniel. While the original primary in MS was “open” does that mean when you went in you received a a ballot listing both parties, or were they given a select party ballot. If select party the 1st time, then you could stop them at the registration desk the second time if you made sure the runoff was closed. A runoff should have been closed.

We really don’t care how you do it up north.

Go right ahead, let the Democrats choose the GOP candidate, just like they do in California…

FACT: Mississippi is the poorest state in the Union.

And because of tonight, it will continue to be.

It also has the highest rate of obesity, diabetes and heart disease.

They deserve what they were paid for.

Let Cochran lead them to an early grave.

All that “pork” could make the argument for showing how government largesse leads exactly to obesity and associated health problems, but too many people wouldn’t understand how that actually works.

Cochran explicitly asked Democrats to vote for him.
And they wonder why they’re called RINOs.

If that’s the standard you want to set, Dave Brat is a RINO.

I don’t know much about how Brat conducted his campaign. The New Yorker’s Ryan Lizza was on the ground there during the campaign. He never mentioned in his reporting that Brat explicitly campaigned for Democrat votes. Considering Lizza leans left I expect he would have mentioned it in his reporting if it had happened. But who knows.
http://www.newyorker.com/online/blogs/newsdesk/2014/06/david-brat-the-elizabeth-warren-of-the-right.html

It’s my understanding that some local Democrats tried to engineer a very weak “Operation Chaos”. That is, Democrats tried to persuade fellow Democrats to vote for Brat. (I’ll explain below that Cochran campaigned for Democrat votes.) Then after Cantor lost, his pollster – who got the polling terribly wrong and needed a scapegoat – blamed his bad polling results in part on Democrat crossover voting.

However, Sean Trende used statistical regression analysis to conclude that if Democrat crossover voting did occur, it was probably not enough to decide the outcome.
http://www.realclearpolitics.com/articles/2014/06/13/did_crossover_democrats_doom_eric_cantor_122967.html

Cochran, whose been an elected Republican for over 40 years, explicitly asked for Democrats to vote for him to defeat a conservative Republican IN A REPUBLICAN PRIMARY. Cochran bragged about bringing home the pork (which will require indebting the U.S. even more than it already is). Cochran’s campaign hung fliers accusing McDaniel of being a racist with the hope that black Democrats would turn out to vote against him. Cochran orchestrated robocalls to Democrats urging them to support Cochran.

Again, I’m not aware that Brat did any of this. He may have and I just don’t know. But based on what little I do know it does not appear to me that Brat explicitly campaigned for Democrat votes the way Cochran did.

Well, this race has certainly saved me a lot of time and money. When the RNC calls now begging for money I’ll just remind them of the behavior they supported in this race and hang up.

I love it when they call. I give them an earful for as long as they’ll listen.

But I guess they finally took me off their calling list because I haven’t heard from them for about the last six months. Drat.

McDaniel would have won handily if not for being hip-deep in that nursing home scandal.

“Not a campaign staffer” is not much excuse when one of those arrested was his former radio co-host. And stonewalling inquiries after first giving out differing versions of the story doesn’t build confidence.

For the record, I doubt McDaniel had any knowledge of the nursing home invasion. But he clearly was trying to get bloggers to raise the issue of Cochran’s executive assistant and suggest there was an affair without getting his own hands dirty.

Seems to have backfired.

McDaniel beat Cochran in the primary. Cochran should have admitted defeat right there and the NRSC, McConnel etc should have supported their base and backed McDaniel.

Your refusal to acknowledge that reality and deflect with straw-men is very Rove-enesque in its duplicity and sanctimony.

Save your breath. we see you for what you are.

Let us be clear about what happened here: the establishment Republicans have encouraged Democrats to vote for their candidate over wooing Tea Party candidates to vote their candidate.

This said it all, establishment Republicans have more in common with Democrats then Tea Partiers.

It is time for the Tea party to separate from the Republicans and form their own party.

What have we learned today in this Cochran-McDaniel race?

The Establishment GOP would rather have a mentally-fragile, possibly incompetent rock gathering moss in the Senate than an active Senator who will follow the will of the people in a Constitutionally prescribed manner.

The Establishment GOP would rather have a Senator who will abandon his preferences (they don’t even qualify as “principles”) at the first sign that there might be a “compromise” (which means the Progressives say “do it our way or else we’ll throw a hissy-fit. And, oh yeah, Latinos.”).

The only way that the RNC and RSCC are going to get the message is if they stop getting donor funding. Give to candidates directly, but if the national orgs come calling, tell them “you supported a Progressive over a Conservative. That is an unforgivable sin. NEVER call me again. If I want to give, I will give directly to the candidate, and I will advise each and every one of my fellow voters to do so as well.”

I suppose we can only hope that Cochran keels over between now and the General in order to get a Conservative Senator and not a RINO sell-out….

Cochran could have retired honorably, now he’ll deteriorate into a demented old fool.

Do unto the GOP as they have done unto us: no support, no vote.

So let me get this straight, it is ok for Va. to have open Republican primaries (see the Cantor-Brat contest) but not ok for Mississippi?

Don’t be willfully stupid. Democrats did not make the difference in the Cantor-Brat contest, he lost votes since 2012. AND Brat did not campaign for democrat votes like Cantor and especially Cochran did. Neither conservative candidate campaigned for democrat votes in their primary.

But it is always okay for GOP establishment guys though right? Nobody else better even threaten to do the same right Captain?

Actually my feeling is the opposite: close the primaries and a person must have declared before the last election to get a vote.
Then the longer a person votes consecutively as a Republicans in primaries the more his vote counts. Say you’ve voted as a Republican for the last ten years. Your vote counts twice as much.

It is now clear that D.C. Republicans are as corrupt as D.C. Democrats. Well done, Rinos you have killed your party.