Will Chris McDaniel take down Thad Cochran — and could anything else go wrong by tomorrow? 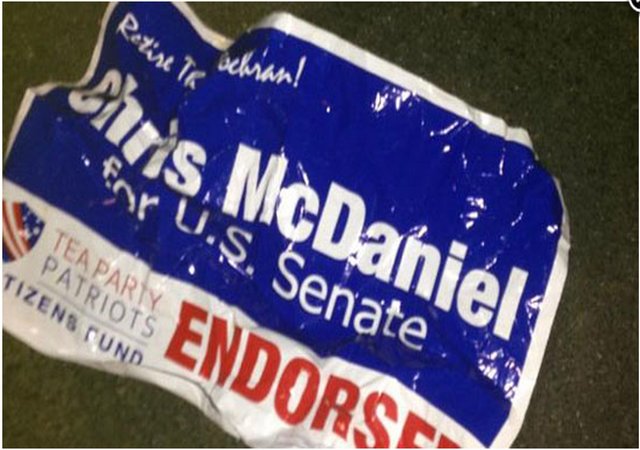 Tomorrow Mississippi decides which Republican will face off against Democratic Challenger, Travis Childers, in the bid for a coveted U.S. Senate seat. Easily one of the most bizarre primary elections I’ve witnessed, the final campaign pushes have produced more oddities. Yes, more.

Earlier today at a rally for Cochran at the War Memorial auditorium in Jackson, Senator McCain appeared to stump for Cochran. According to The State, “I call on my fellow veterans, I call on my fellow service members to send Thad Cochran, a good and decent and honorable senator, back to the United States Senate,” McCain pleaded.

This follows Senator McCain’s 2008 criticisms of Senator Cochran on Meet the Press:

We all know as much as I love Thad Cochran, he’s an appropriator and I have fought him hard time after time after time on these pork barrel projects he’s been famous for, many of which in my view have been harmful to the economy and harmful to our environment. We’ve had strong words from time to time about pork barrel spending. He’s one of the great pork barrelers and he’s very proud of that.

Emphasis mine, because well, that’s the money line. You can watch McCain’s 2008 remarks here:

Chism Strategies released a poll Saturday that shows McDaniel with a 52-44 lead over Cochran with 4% undecided. As UPI reports:

Brad Chism, the Democratic pollster who came closest to predicting the outcome of the primary three weeks ago, reported a tightening in the polls last week, but since has seen McDaniel growing his advantage.

Under Mississippi law, Democrats may vote in the runoff if they did not vote in the Democratic primary on June 3, and so Cochran is courting black Democrats in a last-ditch effort to retain the seat he’s held for more than four decades.

“Surrogates for the 42-year GOP incumbent are groveling for Democrat and union votes in the runoff after his campaign spent millions in the primary bashing President Obama and his policies,” Chism explains. But “unless Cochran expands on the electorate with general election Republicans and crossover Democrats, McDaniel wins.”

Blair is accused of damaging and stealing several of Cochran’s opponent’s campaign signs. A warrant was issued for his arrest Sunday night after a police report was filed.

WMC Action News 5’s Michael Clark reports that Blair arrived at Southaven Police Department on Monday morning to turn himself in. He was released on a $350 bond and is charged with malicious mischief, which is a misdemeanor. 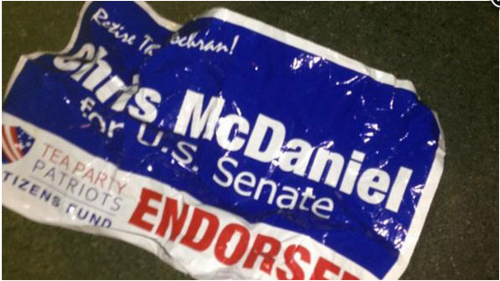 Both campaigns were contacted for comment and their responses were exactly what you’d expect from this primary free-for-all:

In response, a McDaniel spokesperson said, “No one from our campaign had a warrant issued for their arrest.” 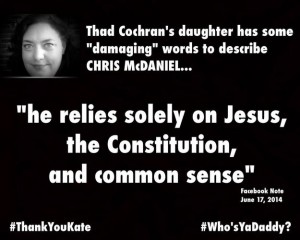 The meme was posted to McDaniel’s Facebook page last night.  As Buzzfeed points out, Cochran’s daughter is a professor at the University of Southern Mississippi. Evidently, the meme clipped a quote from a Facebook post she’d authored earlier:

I think this is the reason that so many seem swayed by my father’s opponent: he is valued for his lack. Lack of experience (he is not a “career politician.”) Lack of wisdom (he relies solely on Jesus, the Constitution, and common sense*—combined in the veneer of “goodness”). Lack of judgment (he vows to refuse federal monies and to try to impede legislation). Lack of specificity (what are “Mississippi values”?). Lack of perspective (how does he believe for one moment that a junior Senator from the poorest state will have any influence in Washington? How can he believe that he will not want his family to live with him in the D.C. area?).

Of course the Cochran campaign responded saying, “Chris McDaniel’s latest appalling attack on Sen. Cochran’s family is further proof that he is unfit for office.”

Incendiary? Not exactly. But the McDaniel camp probably could’ve avoided bringing family into the picture.

As the mudslinging comes to an end, we hope you’ll join us tomorrow for our election updates.

if the family posts/speaks out against another candidate then they are fair game.
McDaniels didn’t bring her into the spotlight, she inserted herself there.

Incendiary? Not exactly. But the McDaniel camp probably could’ve avoided bringing family into the picture.

McDaniel camp “bringing family into the picture”?! I would say she inserted herself into the picture. They just then quoted and used her words (accurately) and included a picture (I assume that is really her……) in a very basic social media style advert. Pretty savvy, IMHO.

Why is that “appalling”?! I would say that rallying Democrats to vote for you in a primary runoff is “appalling” personally. I would say that pushing a meme that somehow an opponent is criminally involved in an incident when the police have stated that the opponent – and staff – have NO criminal involvement in the incident is appalling.

I would say making crazy statements about animals and then not remembering saying them, even when shown it on video, well……that is appalling!!

Cochran’s daughter said a great deal more in her Facebook post including that Mississippi voters are too ignorant to vote for the right person. And that they listen to neo-con talk radio zealots. She didn’t mention why her father’s campaign accepted half a million dollars from two NY billionaires, Bloomberg and another guy. Nor did she explain why an academic study Jan. 2014 finds Mississippi the most corrupt state in the country 1976-2008—her father’s report card. The study points out large public projects are most prone to corruption–that’s Cochran’s entire resume. And corruption costs innocent residents an additional $1300 per year. I guess it’s easier to rip off people in the poorest state—as poor as it was 40 years ago when Cochran supposedly began bringing home the bacon. It’s not “mudslinging” if it’s true. By the way, the SuperTalk radio format they have in Miss. is strictly establishment–Barbour and Cochran.