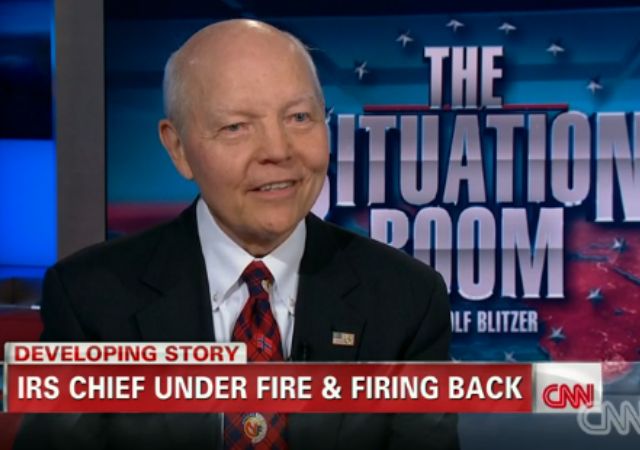 IRS commissioner John Koskinen appeared on CNN Thursday with Wolf Blitzer, where he answered questions about the ongoing IRS scandal.

The embattled head of the Internal Revenue Service blames faulty technology for what he called serious problems under investigation by Congress, the Justice Department and the Treasury inspector general.

John Koskinen told CNN’s Wolf Blitzer on Thursday that he apologized to anyone who had their application for tax-exempt status held up by IRS targeting of political labels.

“The improper criteria used to highlight organizations for investigation just by their name was a mistake,” Koskinen said. “I apologize to anybody who ever had their applications held up needlessly. Everybody needs to be confident that the IRS is going to treat them fairly no matter who they are. Republicans, Democrats, whatever organization they belong to. So it’s a serious matter.”

However, he maintained that evidence uncovered so far by six investigations found no involvement by the White House, as alleged by some Republicans:

Koskinen has been under fire in recent days, after congressional hearings on Monday and last Friday, both of which were filled with some quite contentious exchanges.

When asked by Blitzer whether someone should be blamed for the “antiquated, awful system” that was the cause of emails lost in Lerner’s hard drive crash having been unrecoverable, Koskinen shifted away from the controversy at hand and focused instead on moving forward.

“Well, I think somebody, the IG, is investigating all of the issues about the hard drive crash.” Koskinen went on to explain, “My approach when I parachute into these things is to try to fix the problems rather than try to figure out who to blame, and sometime ago I asked for us to review exactly how the email system runs and whether we couldn’t convert to a more searchable, more retainable email system. I’ve also said we need to respond to the concerns of the archivist, who came out with a very interesting suggestion recently that for agencies struggling, moving forward into an electronic system, they should take the senior people and make sure all of those records and emails are preserved. I should emphasize that all emails are not official records, so if an email is lost, it doesn’t mean we’ve lost an official record.”

Koskinen dismissed the idea that there is a dual standard in how citizens are treated by the IRS if they were to respond that their records had been lost. As he has said in congressional committee hearings, Koskinen claimed that the IRS works with taxpayers and agrees to accept other evidence in place of lost or otherwise unavailable records.

Blitzer brought up the point that Koskinen has donated to Democrats, and asked that the IRS commissioner “reassure the American people that you’re not going to let your partisanship interfere with this investigation.”

“I’ve never been a partisan operative or political operative,” Koskinen responded. “I’ve contributed to campaigns for the last 40 or 50 years, many of them friends. At this point in my career, it’s not my intention at all to play games with the Congress, my goal is to help restore people’s faith in a critical institution for the country, the IRS. As I said, people need to feel comfortable that it’s not a politicized agency, that it treats people fairly no matter who they are.”

I would imagine there are quite a few people who have trouble believing that last part especially.

Watch highlights from the interview from CNN below.

It’s an interesting standard, that if no proof of something exists, there’s no reason to look for it. I wait for it to be applied to federal criminal law.

Ever argue with Democrats about voter fraud?

Well, I submit there are a least two lies embedded in that one short, seemingly innocous statement.

His conduct belies the first proposition, as do several of his quoted remarks (i.e., the one implying “mistakes were made” when an honest statement would have admitted laws were broken and a cover-up ensued).

The second should be self-evident: the IRS is not “critical” to the country. It is an affront to the country. It COULD evaporate tomorrow except for a very small, relatively powerless agency that collected fees and tariffs, and nothing but good would result (if we burn down the tax code).

“…and nothing but good would result (if we burn down the tax code).”

Aside from panicking anyone seeing the cloud of smoke.

A mighty conflagration that would radiate warmth to the hearts of patriots across an entire continent.

(If you’ll pardon a bit of “waxing poetic…”)

Seriously? Then point Lois Lerner to the stand and tell her to state everything she knows under oath.

What a joke this guy is. He’s as arrogant as his boss Obama. He knows he’s helping to stall the investigation and he continues to snicker at any questions about a special prosecutor. Lerner is guilty as is Obama and Holder and many Democratics in office who were demanding Lerner target conservative groups.

Even if he were sincere, that would be on Sysiphian task.

Lying in any way shape of form will not restore confidence in the IRS. Find the emails, fess up and jail the criminals would be the only way to start that journey.

I don’t know that it is possible to “restore” something that was not there to begin with.

So, have all the conservative/tea party groups had their tax-exempt status confirmed, or are there still groups waiting?

Time for somebody on the left – be it a citizen, group, MSM journ0list, candidate, or elected official to be targeted by the IRS, EPA, or even a blatant knock-out attack . . .

Maybe that would generate some needed national attention and outrage.

Waiting for the Republicans to unite and do something without enraged Dems and the lapdog media is a fool’s errand.

That bowling ball headed weasel looks like he wouldn’t last a day in the private sector.

Tailor made for a corrupt, insulated government job.

Campaign contributions to someone that could see you promoted through the government.

Yeah, that doesn’t seem like a corrupt system at all.

What 6 Hard drives all of people under investigation crash destroying all the data in the process, and no backups that existed at the time were used to restore or preserve the data and the company that ran the archive was fired immediately there after destroying all the backups. Not only that but they apparently were not able to get the emails off of the server or any of its backups or offsite locations, and by the way they broke the law doing this. That and despite the people involved spent a lot of time at the white house, for some reason that doesn’t mean that the white house is not involved. this is coming from a white house political appointee?

You know, when they were writing Constitution, they created the impeachment process so that we could remove a bad person without an assassination so we could avoid the all or nothing game risking civil war. This isn’t a small concern, the lack or of a way to remove a leader lead to the fall of the Roman Republic. It’s apparent that Obama has come to the point where he is saying that he break any law that he wants and the only way thing anyone can do is put a bullet in his head. That is really fucking scary, because the implications can be disastrous for our people.

Audit the IRS… The Treasury, et cetera. The whole racket needs to be exposed to public scrutiny.

The legal system is not going to investigate their income source.

Christ, did they hire this guy from Central Casting? He’s a walking talking stereotype of every smarmy, amoral power-mad Government official from every movie or TV show that’s ever been produced. He could have stepped right out of one of the ‘Harry Potter’ movies.

He also resembles a lot of the super villains from old Bond movies.

LOL. Restore faith in IRS !!! The only way to restore faith in the IRS is to fire everyone. Get rid of millions of pages of tax code and go to a flat tax. Getting rid of the IRS with all of its incompetent agents and workers could save billions of $$$$$ without changing anything. The IRS has the same affect on Americans as the sound of KGB to Russians or Sharia to those who fear it. The IRS IS A LAW UNTO ITSELF WITHOUT CONTROLS.

Everyone who participated in the political target must be found, and removed from the IRS. Every single one.

Nothing less can make us whole again.

In the private sector within the bounds of a properly executed legal audit, every single computer, e-mail communicating device and back-up system would have been examined thoroughly at this point.

Every bit of resistance, stall or misdirection would be documented for the report.

Those under audit would not be allowed so much lax time to continue with the shredding & deleting which is obviously taking place at the IRS.