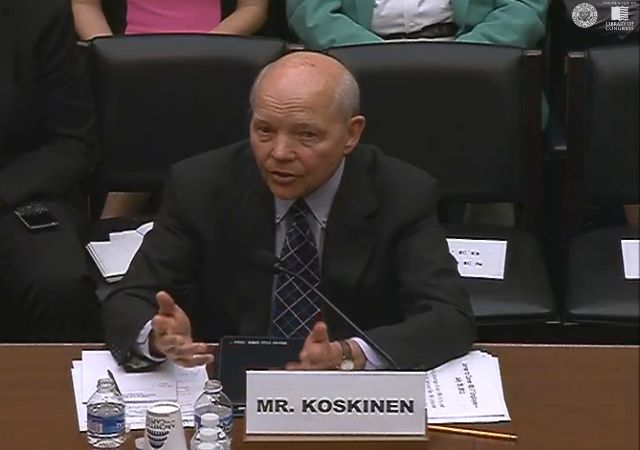 The House Oversight and Government Reform Committee is set to hear testimony tonight from IRS Commissioner John Koskinen, in an evening hearing on the subject of Lois Lerner’s missing emails.

[This hearing has concluded. Full video will be posted when available].

Some clips from the hearing can also be viewed below. Remainder of the original post follows clips.

This hearing of course comes on the heels of Koskinen’s testimony this past Friday before the House Ways and Means Committee, which is another congressional committee that has also been investigating the IRS targeting of conservative organizations.

The IRS recently released emails between Lerner and personnel from the IRS Information Technology Division, in which there was written correspondence concerning attempts to recover Lerner’s hard drive. Those emails showed that after attempts from “several highly skilled technicians, including HP experts,” the data on the hard drive still could not be recovered. The agency has indicated that Lerner’s emails in question were stored on her local computer and that the hard drive has since been “recycled then destroyed in the normal process” – claims that have only fueled ongoing skepticism and generated more questions about why such materials wouldn’t have been backed up.

House Oversight and Government Reform Committee Chairman Darrell Issa sent Koskinen a letter over the weekend with fifty questions ahead of tonight’s hearing.

When asked during a Monday morning appearance on FOX News what he considers to be the most critical question for Koskinen, Issa indicated he wants to know who made the decision to destroy the hard drive with any potential documents in question.

“The most critical [question] really has to do with, in fact, who made the decision to destroy the documents. Remember, a lawyer, Lois Lerner, is somebody who decided to put documents on that C drive, on her local drive. Can you believe for a moment that she didn’t make a backup copy? Or, if those were important documents to her, that she didn’t insist on greater steps being taken to try to recover them,” Issa said.

When asked whether he believes the IRS is hiding something, Issa pointed back to Lois Lerner and indicated he believes Lerner was acting on the president’s opposition to the Citizens United decision.

“Well, I believe Lois Lerner is hiding something,” Issa said. “I believe the Justice Department, the IRS and the White House are interested in her succeeding in hiding what she’s hiding, which is her targeting of conservative groups based on their ideology in support of the president’s war on Citizens United, a Supreme Court decision that he didn’t like. He didn’t like it enough to basically chastise the Supreme Court in the House of Representatives. This is something that he vehemently opposes, and Lois Lerner acted on his opposition.”

Watch the full interview with Issa on FOX News below. (Video via Daily Caller)

The truly critical question is: have all the players in the IRS already been granted Presidential Pardons, or will that wait until the end of the term?

Elijah Cummings opening statement : There is no ‘here’; here, move along. And Bush did it.

Dana Perino just responded to Cummings lie on twitter, re: Bush and emails. Those emails were disclosed as “lost” but then were found. The difference with the IRS, is they said they had them all and now report them as “lost.” Note that she said “disclosed” – meaning there wasn’t any effort to delay and pretend there was no there, there.

Cummings colluded with the IRS on their targeting of Tea Party groups. Once those emails hit Issa’s desk, Cummings should have been removed from the committee. The fact that he’s still sitting there accusing Bush of malfeasance and whining about a witch hunt shows he knows the republicans will never hold him accountable.

It also means they know the ‘pubs will never hold obamullah or anybody of any significance accountable.

No matter Issa’s sincerity and that of some other House ‘pubs, with the current GOP brain trust, it’s all just a dog and pony show for we the people.

Just curious… what does the “Hon” on his nameplate represent?

I used to think that it was short for “the Honorable”, but that ship has sailed, got caught in a storm, struck a reef, foundered, and sank to the bottom.

The n was a typo.

Honor and distinction are words with different meaning nowadays.

At least according to this administration.

Honorable, in the same way that Anthony meant it in Act3, scene 2 of Julius Caesar.

Could be short for honkey … as 0bama calls him ‘my ‘ol balding honkey’.

We know they are lying.

They know we know they are lying.

But they don’t think the Republicans will do anything about it.

Unfortunately I think Koskinen, Lerner, and Obama are correct.

Either the IRS commish is lying or the government agency is extremely inept. Or a combination of both.

There is nothing worse than people who are always so negative.

Considering the questioning from Trey Gowdy, I do think that Lerner and now Koskinen are in serious trouble.

The White House thinks that they have done a great job hiding their complicity. However, I believe that this will come unstuck because there is evidence that Democrats were demanding that action be taken because of the decision in Citizens United case.

If you can recall Obama was extremely intimidating at the time of the decision, and that included castigating the justices of the USSC.

If the Republicans take over the Senate then it will be a whole new ball game… and then you might just hear the impeachment word.

Boehner isn’t going to let anybody actually DO squat. He’s in bed with the bastards.

Koskinen served as CEO of Freddie Mac from September 2008 to December 2011. That organization wasn’t very forthcoming, either.

THERE WAS CRIMINAL ACTIVITY [email protected]!!%$#@!!!

Emails don’t disappear with a hard drive crash.
They are lying their asses off, and ANYONE who knows two bits about computer science knows that.

Most of these Congressmen are the crappiest interrogators. Why don’t they appoint one or two to do this on their behalf, e.g. Trey Gowdy.

someone like Trey Gowdy needs to be appointed as a special prosecutor. It is time to go the next step.

It looks like the Republican side just hasn’t done enough homework to properly shape their questioning. They’re playing whack-a-mole, and Koskinen is very slick, promising that they’ll get their emails sooner or later, and all too glib in his evasions.

At the moment, it looks like an NGO named Judicial Watch is miles ahead of the Congressional committees in extracting information from IRS via FOIA. But they’ve just scratched the surface. It also looks like the Executive branch has blatantly destroyed much evidence, 10 days after the Committee asked for it, and has dug in for a siege.

Is there not one Deep Throat who can properly illuminate this Constitutional travesty? If not, the country is in serious trouble, because the Committees are coming up empty-handed.

The administration will comply with a FOIA request from an outside group (grudgingly) but at the same time, they’ll tell the republicans to piss off. How to you hold a comprehensive investigation when the target is deliberately destroying evidence and lying to your face? Who’s going to hold them accountable… Eric Holder??

The ‘rats will win this one just like they win against the dumb, duh, spineless, candy-assed ‘pubs all the time.

Rep just brought up Sander Levin’s name, who is related to Carl Leven, who is thought to have requested IRS inquiries.

The Dems are working toward an Oscar for the acting job. They have a vested interest in the outcome of any investigating, they are carrying the water for the commish, and this guy, has it right, this is an embarrassing display.

Without a responsible media this goes nowhere. The Republicans will do nothing unsupported by polls and without media pushing any of this those polls won’t get there.

This is ridiculous. It costs pennies to store terrabytes of documents. It involves very little to capture emails and keep copies in storage. It’s not a big deal to create a simple program to search and collect emails containing certain headers, e.g. to or from Lerner.

It is also nearly impossible to believe that the IRS allows tens of thousands of employees to effectively access taxpayer and federal government business information, send emails wherever without oversight, and treat all of it as under their individual and sole dominion and control.

No it does NOT cost all kinds of money to create a search program to obtain emails from “disaster recovery tapes”.

Now the world’s IT community have it clear: our glorious IRS is the most incompetent agency in the entire world, technologically speaking.
They can’t even backup their eMails !!!
Laughing stock, that’s what they are, thanks to Mr. Koskinen and his crew.

But we all know that the whole show is just B.S.

But the IRS also supposedly has this exquisitely fine-tuned system demanding that taxpayers e-file, and able to keep taxpayers’ emails and data and employer filings (including meshing all of it with info from other agencies, e.g. Dept of Education for college grants and loans, Social Security, child support scofflaws seeking passports, foreign account banking records, and now ostensibly Obamacare medical, etc.).

I disagree. obamullah, Lerner, et. al., in answering the charges and investigation, faced appearing either criminally culpable or incompetent. They wisely chose incompetent. Even though nobody’s buying it, which they probably knew would be the case, it was still the wiser choice.

The fact that Lerner refuses to testify is really all anyone needs to know to see this.

If the 48% of American’s who pay nothing in taxes had to pay what the other 52% pay, this ass clown’s existence would make Zimmerman’s experience seem like Disney World.

As I drink my morning coffee, something just occurred to me. It is simple, very simple arithmetic.

They spend 20 thousand dollars per employee just in IT services and they can’t even backup eMails?!!!

They spend 20 thousand dollars per employee just in IT services and they want more money ???!!!!!!