“Something BIG happening in Kansas. We see it everyday in our crowds, our volunteers and our contributions. 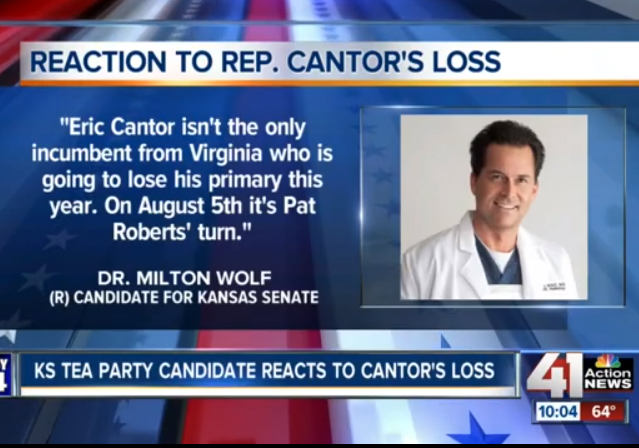 I said it after the Missouri Senate Primary, and it holds even more true now, The Lesson of Iowa and Mississippi primaries: Don’t give up on Kansas:

Joni Ernst and Chris McDaniel had no chance of winning, until she won outright and he won but is in a runoff.

Both came out of nowhere because voters rallied around a Tea Party backed candidate. In the case of Mississippi, the battle was against a legacy entitled incumbent.

The lesson is not to forget Kansas, where Dr. Milton Wolf is challenging legacy entitled incumbent Pat Roberts in the August 5 primary.

Roberts has tons of money and the Republican establishment behind him.  And a house in Virginia which is his real home.

It can happen again.  Don’t settle for less.

There is a certain irony that so many people are saying Eric Cantor’s loss in Virginia may be harbinger of things to come in Kansas, since Pat Roberts spend almost all his time in Virginia, and that has become a huge campaign issue.

A third repercussion is that this has to give other Republicans — think Pat Roberts in Kansas and Lamar Alexander in Tennessee — a scare. The reason: Their challengers are suddenly going to receive A LOT more attention after Dave Brat’s victory last night.

Just check out this fundraising email Chris McDaniel, who’s competing against Sen. Thad Cochran (R-MS), sent to his supporters. “Tonight, conservative Dave Brat won a stunning upset up in Virginia, unseating House Majority Leader Eric Cantor. Help us pull off another stunner in Mississippi. What does that have to do with the senate race in Mississippi? I’ll tell you: It’s one more example of what can happen when true conservatives band together and demand better from Washington.”

And here’s what Tea Party candidate Milton Wolf, who’s taking on Roberts in Kansas, said: “Eric Cantor isn’t the only incumbent from Virginia who is going to lose his primary this year,” Wolf said in a statement to reporters. “On August 5th, it’s Pat Roberts’ turn.”

Pat Roberts is ducking debates so far — and insisting that all four ballot candidates be on stage, even though only Wolf is a serious challengers. That’s the sort of tactic that may backfire in this environment.

Dr. Wolf at my request provided me with the following statement:

“Something BIG happening in Kansas. We see it everyday in our crowds, our volunteers and our contributions. Last quarter among individual contributors, we actually outraised a sitting United States senator. That’s because people who are hungry for bold, conservative leadership are ready to clean house.”

I asked for a couple of photos of the crowds, and was sent these two, among others: 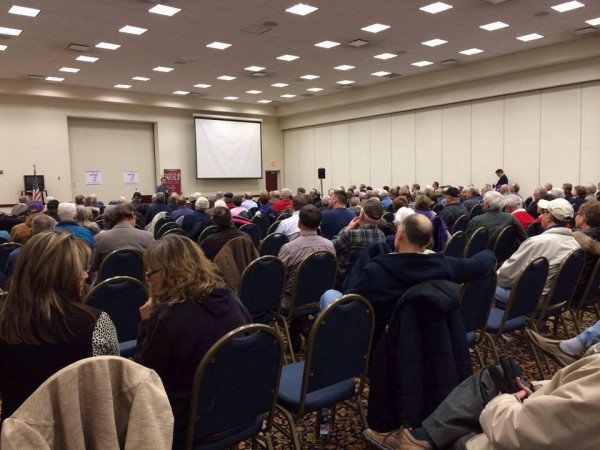 Dr. Wolf comes across to me as the real deal.

I may have to send him this month’s cigar budget.

Last week I got a live call from Dr. Wolf, who was on the phone working for contributions. We spoke briefly about Ted Cruz, my having raised the issue. Dr. Wolf, as you say, is the real deal. I sent him additional California dollars.

When you say “cigar budget”, that’s not a Bill Clinton-type euphemism, is it?

I put cigars to the use for which gawd intended them.

And nothing of the Clinton perversions has any appeal to me. But I am not sexually jaded and kinked. Happily…!!!

I’ve been thinking about Cantor’s loss last night, and have some observations:

1. No one saw this coming until the last few weeks.

3. That means the establishment Republicans have an incredible ability to protect their own and skew the outcome of a race. The only reason Cantor lost was that the establishment didn’t figure out he was in trouble soon enough.

4. It also means that the base is ready, willing and eager to dump establishment Republicans given half a chance.

Maybe Wolf has a shot. I live in Topeka and to me he is damn near invisible. The Facebook x-ray fiasco although it occurred well in the past still has a negative affect among Kansans. Pictures are fine but I cant tell whether those were from Wolf rallies or events he attended. e.g. He was at the St Patricks Day Parade in Topeka with good crowds but the people weren’t there to support Wolf.