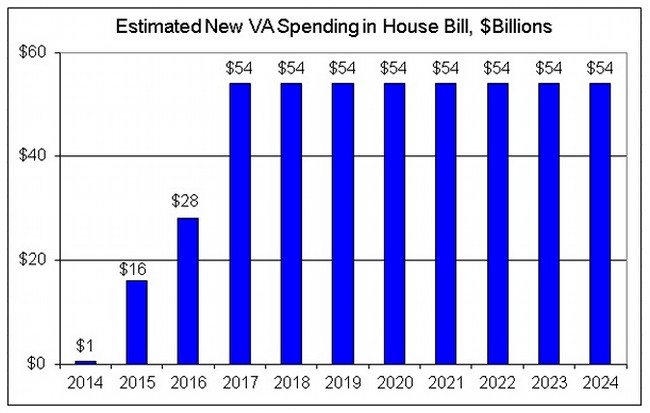 Lack of funding is not the problem at the Veterans Administration.  It’s the government healthcare system, stupid.

Department of Veterans Affairs administrators knew two years ago that employees throughout the Southwest were manipulating data on doctor appointments and failed to stop the practice despite a national directive, according to records obtained by The Arizona Republic through a Freedom of Information Act request.

A 2012 audit by the VA’s Southwest Health Care Network found that facilities in Arizona, New Mexico and western Texas chronically violated department policy and created inaccurate data on patient wait times via a host of tactics.

The practice allowed VA employees to reap bonus pay that was based in part on inaccurate data showing goals had been met to reduce delays in patient care, according to the VA Office of Inspector General. At the Phoenix medical center alone, reward checks totaled $10 million over the past three years.

Clearly, there are problems in the VA system which need to be addressed but is more spending the best solution? Congress seems to think so. Chris Edwards writes at the CATO Institute:

Last week the Senate voted to greatly increase health care spending for veterans. If the new spending were made permanent, it would cost at least $385 billion over 10 years, as Nicole Kaeding noted. The House version of the bill would cost at least $477 billion if made permanent. The chambers will now work out a compromise bill, and—going out on a limb here—I’m guessing that the compromise is also a budget buster.

The bills would allow veterans to access health services from facilities outside of the Veterans Affairs (VA) system. The VA system needs a fundamental overhaul, but these bills would appear to just throw money at the problem without creating structural reforms.

The CBO score for the Senate bill is here and for the House bill here. For the House bill, CBO says spending would be $16 billion in 2015 and $28 billion 2016. The House bill would authorize the new spending until 2016, but if Congress extends it permanently the total costs would be $54 billion a year and about $477 billion over 10 years.

I wonder how much of that money will be used for employee bonuses?

Featured image a screen cap from the CATO Institute.

This is about all we can expect from either R’s or D’s in DC. WE, the people, are F**KED!

Employees with integrity and an honest work ethic would do more than any amount of money. The VA seems to be staffed with lazy people who don’t care what the consequences are of their actions enabled by politicians who didn’t care about any of it as long as they got reelected.

It isn’t just the VA. At every federal agency a worker has a better chance of dying from an accident or natural causes than being fired for negligence or incompetence in the performance of his or her duties.

This causes all kinds of problems. Not only are naturally lazy people attracted to such positions, but the personnel who are competent can easily develop a why bother attitude when they see the screw ups getting away with murder.

I’d happily support any presidenial candidate who promised to force every federal civilian workforce to terminate the bottom 3% of all workers within 90 days of his taking office.

I just downvoted you by accident. My apologies.

“I’d happily support any presidenial candidate who promised to force every federal civilian workforce to terminate the bottom 3% of all workers within 90 days of his taking office.”

Well, that’d take care of the whistleblowers and other malcontents.

Good points all. IMO in a lot of cases government employment is a jobs program for the otherwise unemployable.

Lack of funding is not the problem at the Veterans “Administration. It’s the government healthcare system, stupid.”

It’s the profit motive that caused this.

“Greed” or “avarice” is what causes this.

“The profit motive” is neither of those things, AND…

something apparently beyond your comprehension.

It’s easy to spend money when you don’t have to sweat for it.