Give this Israeli soldier in America a round of applause

Give this Israeli soldier in America a round of applause

Hen Mazzig made a difference. 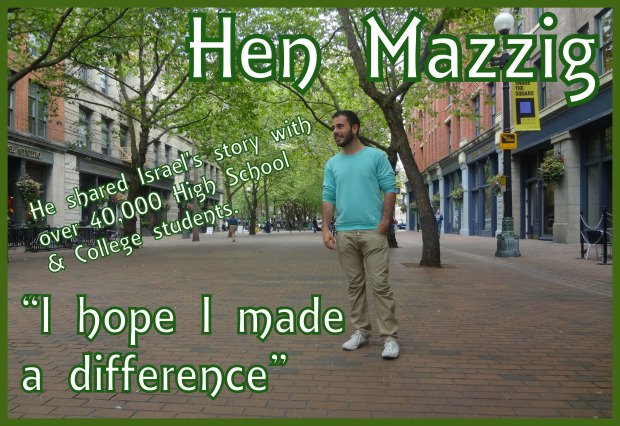 When I saw an extensive write up of his time in the U.S. at The Mike Report, I asked if we could run it here, and Mike kindly agreed.  Here is the report.

HEN MAZZIG: I HOPE I MADE A DIFFERENCE

November 21st of 2012, Hen Mazzig was walking down Shaul HaMelech street in the heart of Tel Aviv when an ear splitting explosion ripped through the air. The gut wrenching sound echoed across the apartment and office buildings for several seconds soon to be replaced by sounds of agony, then sirens.  A Dan commuter bus, No. 142,  was  running its usual route when at twelve noon Muhammad Mafarji used his cell phone to detonate an explosive device packed with nails and shrapnel. Hen was a block away. Hen knows the value of peace.

At the time Hen’s day job was as a liaison officer in the Israel Defense Forces (IDF), he worked as an intermediary between the IDF and the Palestinian Authority (the PA), the UN, and the many non-governmental organizations. Fluent in Arabic and English in addition to his native Hebrew, Hen was the  ideal man for the job. While always the consummate professional, those with whom he worked praised Hen for his compassion and dedication to conflict resolution.

Honorably discharged in June of 2012 Hen was not ready to settle down just yet, so when he was offered a job to serve as a Seattle based Shaliach for the Israel advocacy group StandWithUs, he jumped at the opportunity.

This new assignment was an eye opener for a self described left of center Israeli. In just the first few months on the job Hen had been called every name imaginable, had been verbally assaulted, physically threatenedand was asked by the sponsors of an event to leave a venue out of fear for his safety. Hen details some of these experiences in his viral Times of Israel (over 22,000 shares) “An Israeli Soldier to American Jews: Wake up!”.

But rather than discouraging Hen, the hostility he faced inspired him to redouble his efforts. In the one and a half years since Hen arrived in Seattle, keeping track of Hen was much like tracking a tornado. Always in motion, always traveling  Hen shared the beauty of Israel with over 40,000 students from High School through college. His final project, supporting the students of the University of Washington in fending off a BDS inspired divestment resolution resulted in a decisive victory.

I Invited Hen to share  a cup of coffee with me before he flies back to Israel. We chatted and Hen reflected while staring out the expansive windows of Cafe Umbria in Pioneer square. It was a quintessential Seattle moment. Just outside the coffee shop doors a throng of screaming teens were lined up for blocks to meet Macklemore who was signing autographs down the street.  A perfect farewell I told Hen.

I asked Hen as he checked his ever buzzing and dinging smartphone what he had learned over the past 16 months.

“What did I learn? That Anti-Zionism is Anti-Semitism. They are saying that Jews have no right to have their own country. It’s not about what Israel does. It’s just like the millions that call every day around the Middle East for the annihilation of Israel don’t care about what Israel does or not, just like the Nazis’ hatred had nothing to do with the way the Jews behaved. It’s an embrace of evil and hate.”

Back in the winter of 2013 Hen was verbally assaulted and threatened at a screening of the anti-Israel film “Five Broken Cameras”.  I asked him how he felt when the sponsors of the event attacked him again in the pages of the JTNews. Hen chuckled,  “When the haters start bashing you personally, you know you’re doing something right.”

What most surprised you during your your 17 months in the states? I asked.

Sadly, I see a growing disconnect between the Jews of the United Stated and Israel” said Hen. “Some Jews here have a nation of their own and it is not the Jewish state, for many in the Jewish community America has replaced Israel”.

Hen has tried to make sense of the passive approach some in the Jewish community have called for  in response to the  anti-Israel BDS movement. “It’s like a religion, you know Christian Science?  They believe disease can be cured without medical intervention. But the truth is that just like a terminal illness, if you prevent treatment, it will grow and we will die. Many over here think you can pray for BDS to go away. But evil never leaves of its own accord, it has to be confronted”.

I asked Hen, Why do you think they advocate this  passive approach?

“Getting into the fray is unpredictable, it’s messy. You get accused of terrible things when you try to defend Israel. But the best leaders are those who put protecting the community above protecting their image. When I was in officer’s school” recalled Hen, “I was taught to lead, not to run behind my people but to run ahead, to lead the way.”

Hen mused further on leadership while sipping his last Seattle latte. “A leader should empower the community to express themselves, to help them become better, stronger and ultimately strong leaders themselves.” Hen contested the notion that  challenging BDS takes too high an emotional toll on student leaders.  “Don’t underestimate our generation” said  Hen. “This generation is no weaker and in many ways stronger than previous generations.  Our parents and grandparents worked bravely against injustice, they did great things, now it’s our turn”

Our conversation turned to the question of welcoming anti-Israel voices into the communal tent. This has been an issue of some controversy, particularly around Jewish campus organization Hillel, Hen paused for a moment before offering that “while we want to welcome as many perspectives as possible into the Jewish conversation, the idea of integrating people who are hostile to our community and to the Jewish state is  irresponsible and puts our community at risk. I think declining to be a platform for hate from any group is both prudent and moral. It is the job of good leadership to make those tough decisions.”.

In his back to back series of engagements across the United States, Hen traveled tens of thousands of miles and spoke with young adults from just about every point of view imaginable. “I  spoke with students who supported BDS and I  spoke with students who advocated violence against Arabs. In both cases I worked to educate them but I would never provide either with a platform to promote their views.”

As our conversation passed the hour mark, Hen’s voice softened and he become contemplative.  His eyes may have become just a little bit moist. “Seattle is an amazing community, there are people here whose dedication to the well being of the Jewish people is breathtaking. I feel honored to have met so many interesting, curious learners of all ages.”  But, Hen shares, one young woman stood out.

“There was a college kid who was extremely hostile towards Israel, she called herself a liberal, which ironically is what I consider myself. She contacted me after reading my piece in the Times of Israel. We had some very difficult, intense conversations over Skype for just under a year.  There was so much she did not know. Nobody had ever told her that the majority of Israeli Jews are from Middle East countries. I told her the story of my Iraqi family. She didn’t know about the Baghdad pogrom of 1941, I told her of my grandfather, who was murdered in 1951 for being Jewish. How my family fled with what was on their back for the only refuge available to them, Israel”

There was the curl of a smile on Hen’s face as he told me that this young woman was just accepted into a pro-Israel Hasbara fellowship and she is making Aliya. She has a job waiting for her in Israel with a Human Rights organization upon arrival”.

“The key  to sharing Israel’s story” explained Hen “is to make it personal.” Facts and figures are important, but they don’t take the place of the human experience. Israel’s narrative is amazing and one to be proud of, but it needs to be told one personal story at a time, that is how you reach people”.

Throughout his American adventure, Hen never lost his sense of humor, perhaps that is what sustained him. Whenever Hen was greeted by anti-Israel protesters He just couldn’t resist joining them with his own hastily scribbled signage.

“You know” said Hen “when Ari Shavit spoke in Seattle he referred to the fight against BDS as a war and to the students as soldiers. I don’t see them as soldiers, I see them as leaders, and with the right guidance they can be great leaders.”

As our coffee and time ran out. Hen offered some parting thoughts. “I want to live in a world where nobody need fear getting on a bus, where people can enjoy a cup of coffee like we just did  without needing to take a protective glance around the shop. I want the same thing for Palestinians, that they can focus on the simple pleasures;  raising  families,  building communities. This is what I am working for”.

On his time in Seattle Hen said  “I hope I made a difference.”

Hen said, “for many in the Jewish community America has replaced Israel”.

Replace ‘America’ with any country, and see that state of mind in which another country replaces Israel as a danger sign. In Nazi Germany, many of the older Jews, parents, grandparents, could have escaped but they saw Germany as home and asked why should they leave. None of them survived.

In watching a host of documentaries on Nazi Germany and the concentration camps, one develops an understanding of Zionism as purposeful divine plan. I’m saying this badly because I’ve been thinking about it for a while and my ideas are still in flux.

Anyway, the point is this: Zionism should be the natural spiritual condition of the Jewish people. No other national bond, no citizenship should cut the cord of Zionism. Zionism is not political; it is spiritual and goes back to Abraham and promise. To reject Zionism is to reject God cause He is its source.

What an incredible young man, possessed of a wise perspective and great confidence in himself. I wish him all success in his endeavors. Thanks for sharing his story with us, Professor.

If one wonders whether or not BDS anti-Zionism equates to anti-Semitism, one need look no further than the profanity spewing thug in the video.

A few years ago a liberal-leftist Jewish friend of mine said that I, a gentile, “sound like a right-wing Rabbi” in my defense of Israel. He didn’t mean it in a good way.

Watch the video, my friend. If you like it, there’s a lot more where that came from.

Recognizing hate and evil makes me an extremist?

Okay, call me an extremist.