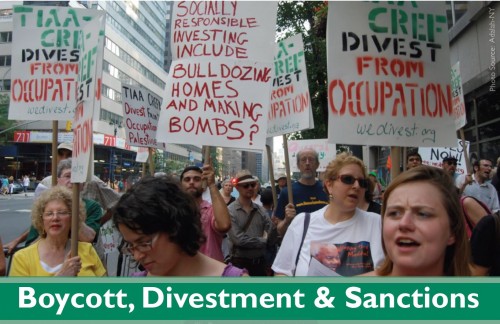 We ran this over at College Insurrection last week, but I think it’s worth running again an excerpt from Hen Mazzig, An Israeli Soldier to American Jews: Wake up!

When I served as a soldier in the West Bank, I got used to having ugly things said to me, but nothing prepared me for the misinformation, demonization of Israel, and the gut-wrenching, anti-Israel, anti-Semitic hostility expressed by many students, professors, church members, and even some high school students right here in the Pacific Northwest….

The new anti-Semitism is packaged in the Boycott, Divestment and Sanctions campaign (BDS), which claims to champion Palestinian rights though its real goal is to erode American support for Israel, discredit Jews who support Israel, and pave the way for eliminating the Jewish state….

At a BDS event in Portland, a professor from a Seattle university told the assembled crowd that the Jews of Israel have no national rights and should be forced out of the country. When I asked, “Where do you want them to go?” she calmly answered, “I don’t care. I don’t care if they don’t have any place else to go. They should not be there.” …

And during a presentation in Seattle, I spoke about my longing for peace between Israel and the Palestinians. When I was done, a woman in her 60’s stood up and yelled at me, “You are worse than the Nazis. You are just like the Nazi youth!”

We’ve exposed the ugly face of BDS here many times.  Whether it’s Israeli flags embedded with a Swastika at Oberlin, American Friends Service Committee running an anti-Israel Training Camp for college students, or the academic boycott by the Association of Asian American Studies, there is a virtual war on Israel taking place on many college campuses.

Hopefully Mazzig’s post will be a wake up call.

A shame that a solider of our best Allies would be treated in such a way. It is my personal belief that America needs Israel more than Israel needs America.

You forgot Mexico, all of Central and South America as well as Australia and New Zealand.

Aw, heck… My puny hyper-privileged white brain can only handle just so much cogitatin’ ‘fore I haz brain lock. I’m still trying to figure out how and when we went to 57 states. Musta happened in my lifetime, but I sure don’t remember that.

Historically, Republicans and Republican administrations have been the best friends of Jews and Israel.

I have always been curious about two things:
1. Why are most Jews democrats?
2. Why are a lot of American Jews hostile towards Israel?

I have a friend whose father is from Buffalo, NY. His father is an immigration lawyer and he is Jewish. Let’s just say that if I were to say his last name, it would sing a tune with you.

Okay, when I first met him, he found out that I am from Arizona and he proudly boasted to me that he and an organization he belongs to boycotted Arizona over the immigration law in order to hurt Arizona.

His big thing was that the immigration law dehumanized the illegal immigrant.

Like most elites, they like to think they are doing good when in fact, they are hurting the very people they claim to love.

Anyway, I wonder if he loves Israel.

It’s the law of unintended consequences. The best example of “killing with kindness” came from America and Europe sending massive quantities of good, used clothing to parts of Africa. Yes, it clothed people, initially, but once the “feel-good” wore off, the recipients were reduced to rags. Why? Well the native weaving and clothes-making industries were put out of business, along with workers, farmers, suppliers and sales people.

That idea was right up there with, “Let’s bring us foxes to Australia, so we can hunt the little buggers. Oh, they’re eating the lambs? Well, bring in the rabbits. Foxes love rabbits!” We know how well that went.

Good point. But don’t forget the worst bad idea ever down under too, the cane toad. Boy are they paying badly for that bad idea!

Reminds me of some people I’ve encountered who think they’re very sophisticated and well informed because they’ve spent all their lives in left-leaning university towns. I’ve heard some weird assumptions about what it’s like to live in more conservative and rural or small-town areas. They seem to think the locals will throw rocks at people they identify as left-wing (or people with the “wrong” skin tone).

Don’t know about “…most Jews…” but, yes, certainly large numbers.

I’ve heard a number of theories over the years – everything from immigrant membership in pro-Dem labor unions to attraction to FDR-era Dem platforms which coincided with long standing notions and teachings (such as tikkun olam) about social justice to dynamics between and among Conservative, Orthodox, and Reform Jews.

My guess would be that evidence to the contrary notwithstanding, members of this community will continues to vote Blue as long as they are comfortable with buying the Dem party line of being the party of and for the people, other important issues be darned.

“2. Why are a lot of American Jews hostile towards Israel?”

Just the modern version of Kapos, that’s all.

I’ve concluded that for all their intelligence and education Jews are just about the dumbest people on this planet.

They disproportionately support communists and fascists who hate them and would exterminate them given the opportunity.

They continue in their delusion that being nicer to Muslims will someday result in peace in the Middle East.

They refuse to be in the same room with conservative Christians, who are Israel’s and Judaism’s best friends in America.

Hopefully Mazzig’s post will be a wake up call.

Sadly, it won’t. Far too many American Jews (at least the secular variety) are indoctrinated in leftist “liberation theology” and Democratic Party loyalty.

If you don’t hear things you hate, then you don’t have a free press. Nor do you have free speech. Thomas Jefferson riffed on this.

That there’s this hostility to Jews on a college campus? Gee. I’m not surprised.

You’d surprise me if you said these idiots were math geniuses.

As to the credentials given out (at big expense to the students), those that have time to kick these ideas out in an open forum … They won’t be getting the best jobs.

Heck, even McDonald’s may turn them down, ahead?

I’m ashamed that he witnessed this treatment in Seattle, but not surprised; after all, Seattle is a sanctuary city. We need a LOT more conservatives to come settle Washington…

It’s funny how so many people tell California conservatives to “GTFO while you still can”, but we are decidedly unwelcome everywhere – as if we abandon a lifetime of solidly conservative political belief and become Blue State liberals when we cross the state line.

Seattle is the epicenter of hard-core radical (to the degree of rabid religious fervor) ideologies: communism, globalism, feminism, abortionism, animal rights-ism and environmentalism.

These people will not hesitate to use any means, even killing to achieve their goals. They are blind to how inhumane and brutal they actually are.

Meanwhile… Most American Jews pretend that it’s 1964 and they need to march in lock-step with Democrats to stop whatcha-ma-call-it down somewhere in the south.

Th Israeli warrior has no reason to be shocked. The liberal takeover of our college campuses has been identified by conservative bloggers for years, as has their mental disease, and the Palestinians are just doing what all fascists/islamic jihadists are commanded to do by their bible, lie; aided, in their mission, of course, by the progressive self-loathing jews.

He’s on a fools errand and should either go to the southwest where he might be welcomed or start a blog.

We have allowed the Muslims to affect us, and not well, via their “donations” to our universities. In this way, for thirty pieces of silver, we are selling our patrimony by calling for the destruction of Israel.

Those who indulge in BDS should know that were Islam to dominate, as it wants, the scorpion whose money they have taken will bite them first.

“We have allowed the Muslims to affect us…”

The filth and hatred of liberalism.

I could have told him this. You don’t find people in Seattle who will flat-out say “To the ovens, go,” but you will find people who will easily say “The Jews control all the wealth in this country” and who will never in a million years think of themselves as the nasty little racists they really are.

Seattle is one of the least tolerant cities in the country.