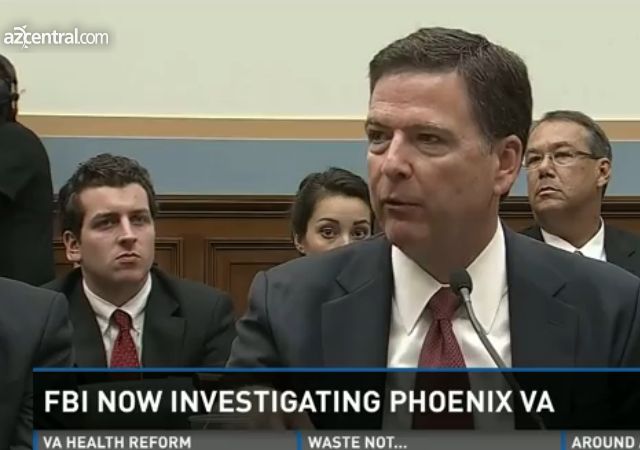 FBI Director James Comey confirmed Wednesday that the agency’s Phoenix office has opened a criminal investigation into the VA.

The FBI says it has opened a criminal investigation of the Veterans Affairs Department, which is grappling with a scandal over long waiting lists to provide care and allegations that paperwork was faked to make delays appear shorter.

The move at least partly satisfies requests from key members of Congress from both parties who have pressed for a full probe by the Justice Department as the scandal accelerated in recent weeks and led to the resignation of VA Secretary Eric Shinseki in May.

Officials have said the inspector general is sharing findings with federal prosecutors, and the Justice Department could launch a full-blown criminal probe if any of the information meets the standard for doing so.

An audit released earlier this week revealed that 57,000 veterans have been waiting 90 days or longer for their first VA appointment, while another 64,000 never even got appointments.  Other recent reviews exposed the practice of employees manipulating appointment schedules to hide wait times.  A report from the Veterans Affairs inspector general indicated that inappropriate scheduling practices are a systemic issue.

Many of these problems first gained intense media attention after reports at the Phoenix VA center, and this is where the FBI is expected to begin its investigation.

The VA’s Office of Inspector General had previously indicated that its investigators found evidence of actions that could constitute criminal activity, and that it had requested assistance from the U.S. Department of Justice. While it is unclear what role the FBI is playing — Comey would not elaborate on his remarks — recent IG reports indicated that VA administrative actions in Phoenix required deeper investigation.

Comey said the inquiry began in Phoenix because that is where the original allegations were made.

Meanwhile, Congress has been taking steps to respond to the problems by proposing legislation intended to open up access by allowing more veterans to seek outside medical care under certain circumstances.

The House and Senate each passed versions of their own bills this week aimed at implementing this and other reforms to address some of the issues at VA facilities.  With both bills bearing a number of similarities and few differences, most don’t expect a lengthy process to reconcile efforts.

I’m guessing they’ll find the problems were local in nature and any resemblance to the same exact problems occurring at other VA offices is purely coincidental and no further investigations will be warranted.

No ObamaCare Death Panels to see here folks, so just move along and get your Free Obama Phone Ice Cream!

No ObamaCare Death Panels and Death Judges to see here either.

The Sad Fate of Casey Kasem: Death by Dehydration

Someone in DC will call someone else in DC and that person will call the FBI AIC for the Phoenix office. Soon after, the Phoenix FBI will announce that it has more pressing matters, matters of national security, that require its full attention.

Didn’t the FBI also investigate/work with the ATF (or BATFE)on Fast & Furious?

We all know how that turned out.

(What’s that? You think Fast & Furious is a movie?)

This investigation will likely reveal only how politically corrupted the FBI is.

Let’s hope this goes far enough to get some folks to rat out the administration. There are too many managers to keep them all quiet, unlike F&F and the IRS.

No longer have any faith in the legitimacy of the DOJ or FBI. Both have proved to be in service of their political masters, not the law. The real mess will be covered up and a VA janitor or two will be be retired with generous benefits.

…and for the next two and a half years, the only thing we’re going to get out of the administration is “We can’t comment on an ongoing investigation…”

To the extent Holder’s boys will do anything except shuffle a few papers, the end result will be that all this started under the Bush administration and it’s all his fault.

Hm. There must be a way to tie Cantor or some other GOPE to this,