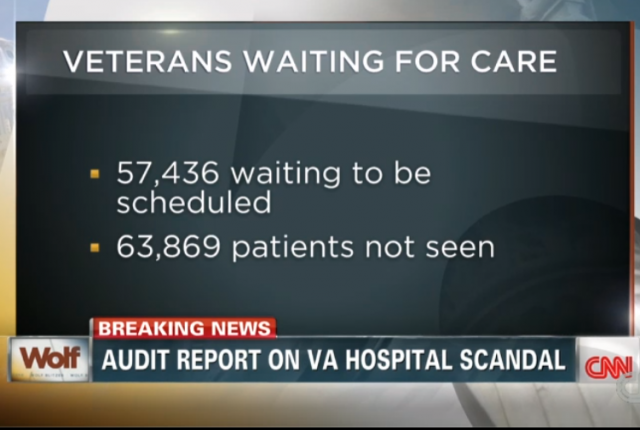 House lawmakers passed a bill Tuesday aimed at addressing some of the now high profile problems at Veterans Affairs facilities.

United and eager to respond to a national uproar, the House overwhelmingly approved legislation Tuesday to make it easier for patients enduring long waits for care at Veterans Affairs facilities to get VA-paid treatment from local doctors.

The 421-0 vote was Congress’ strongest response yet to the outcry over backlogs and falsified data at the beleaguered agency. Senate leaders plan debate soon on a similar, broader package that has also drawn bipartisan support, underscoring how politically toxic it could be for lawmakers to be seen as ignoring the problem. […]

The House bill would let veterans facing long delays for appointments or living more than 40 miles from a VA facility to choose to get care from non-agency providers for the next two years. A relative few vets already have that option for outside care, and this would expand the offer.

The bill also would ban bonuses for all VA employees through 2016 and require an independent audit of agency health care. An earlier House-passed bill would make it easier to fire top VA officials.

[House Veterans Affairs Committee Chairman] Miller said VA would save $400 million annually by eliminating bonuses, money the agency could use for expanded care at its centers.

The legislation comes after weeks of reports of various issues surrounding the Department of Veterans affairs. The latest details to emerge came from an audit released Monday which revealed, among other things, that 57,000 veterans have been waiting 90 days or longer for their first VA appointment, and another 64,000 never even got appointments.

Some have urged for prosecution of some of the wrong-doing at the VA. At a House Veterans’ Affairs Committee hearing Monday evening, this again became a topic of discussion.

From the National Journal:

Want to get the attention of staffers at the Veterans Affairs Department during the ever-growing health care scandal? Fire a few top officials or charge them for their crimes as a warning to others.

That was a solution offered by lawmakers from both parties on Monday at a hearing on Capitol Hill, where a push to punish VA officials was seen as a way to stop the crisis from getting worse.

It remains to be seen whether the Justice Department thinks that allegations of altering the wait times for veterans to receive care rises to the level of a criminal prosecution. But Richard Griffin, the acting VA’s inspector general, said Monday that firing or prosecuting someone for altering a veteran’s records, or changing a timeline to help meet a performance measure, would be the “shot heard around the system.”

The House bill approved Tuesday contains many similarities to that of legislation proposed in the Senate last week, with a few differences. Among those, the Senate bill includes provisions to allow the VA to lease more than two dozen new facilities and proposes funding to hire additional medical staff, according to the Washington Post, which compared the two bills.

Senate Minority Leader Mitch McConnell (R-KY) urged immediate debate on the Senate bill as a top priority, according to the AP.

“Veterans have been made to wait long enough at these hospitals. Congress shouldn’t keep them in the waiting room by putting partisan games ahead of solutions,” McConnell said.

Don’t stop with a band-aid.

REFORM the VA, putting the power of individual vet’s health care choices in THEIR hands…not some over-paid middle manager.

Than, do the same with ObamaDoggel…except don’t even try to reform it.

Kill it. Give Americans our choices, thank you very much. We’ll take it from there.

$400 million? To whom? Just how many VA employees are getting bonuses, and how much?

Boy howdy did I ever choose the wrong line of work…

What I do not understand is, who CANNOT get civilian medical care?

The reason I ask is that my dad is a retired chief in the USAF, and he uses civilian doctors. What are the current requirements that these people do not meet?

One reason I ask is that the number of affected vets in the news reports is clearly a minority of vets.