Yet he insists problems at the VA were unknown to him until recently. 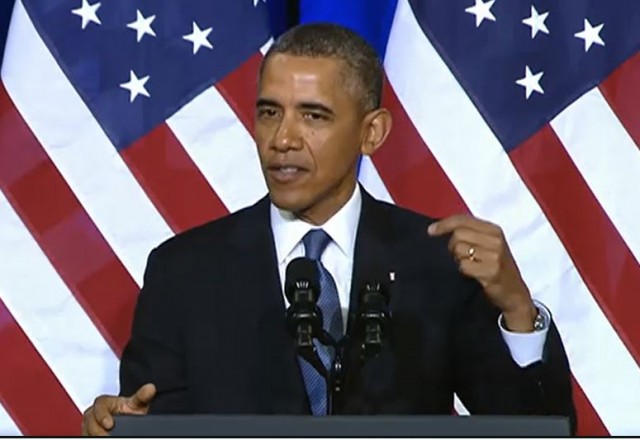 Obama and many of his supporters have claimed that problems with the VA go back many years.

While there is some truth to that, they’ve neglected to point out that prior to becoming president, Senator Barack Obama served on the Veterans Affairs Committee.

This was a very good catch by Weasel Zippers…

Yesterday, Barack Obama appeared to try to shift responsibility for the VA scandal to his predecessors, saying the problems “predated my presidency” and “I only found out from reporters”.

Yes, problems did predate his presidency, but things became exponentially worse while he was in charge. Under him came not just long waits, but clearly a rampant policy of lying and deception concerning those wait times. This involved reports lying to Congress about those times.

Before Obama entered office in 2009, his transition team was also briefed as to the wait time problem…

In case you weren’t aware of it, Barack Obama was also on the Senate Veterans Affairs Committee from 2005-2008. He’s had almost ten years where he has had a responsibility to address these issues. What was he doing then while our veterans waited?

Frances Martel of Breitbart notes that while Obama says he accepts responsibility, he’s all too willing to remind everyone of his predecessor…

President Obama announced the resignation of Veterans Affairs Secretary Eric Shinseki Friday, vowing to take full responsibility for the increasingly widespread scandal engulfing the VA’s health services. Within seconds of taking responsibility, however, the President made sure to assert that the problems “predate my presidency.”

“This predates my presidency. When I was in the Senate, I was on the Veterans Affairs Committee. I heard first-hand veterans who were not getting the kinds of services and benefits that they had earned,” the President said to the White House Press Corps this afternoon. The assertion that the VA scandal was an ongoing cultural problem within the institution followed declaration that he would “always take responsibility for whatever happens,” particularly with regard to Veterans Affairs.

Former Secretary of Veterans Affairs, Jim Nicholson (2005-2007), said on CNN that the Bush Administration had been installing a new appointments system but all the bugs had not been worked out yet (this was the report given to the Obama transition team), but upon the start of the Obama Administration, they abandoned the new system and went back to the old.

The Obama WhiteHouse made it clear to the bureaucrats across the executive branch that it was okay to lie and fake the numbers.

Hundreds of people (mostly Mexican nationals) have died because of the AFT gunwalking and the ATF seniors sail along without even a repremand. The same at the IRS, the NPS, BLS, etc, etc. Why would the VA believe they would be held to account for the deaths of a couple of dozen vets?

Fish rot from the top down. And, in the case, the rot spread down from the White House.

Politico reports on the Obama Doctrine: “Don’t Do Stupid Shit.”

“When I was in the Senate, I was on the Veterans Affairs Committee. I heard first-hand veterans who were not getting the kinds of services and benefits that they had earned,””
And you did absolutely nothing.
Any proof he actually was at any committee meetings?

And not playing with his iPod?

This guy reminds me of a narcissistic, petulant, pathological liar of a little kid who just can’t accept responsibility for anything.

“At the core of liberalism is the spoiled child — miserable, as all spoiled children are, unsatisfied, demanding, ill-disciplined, despotic and useless. Liberalism is a philosophy of sniveling brats.”

Obama had the worst attendance record in the Senate, including showing up for votes and committee meetings. In committees, he was habitually late, acted bored, contributed nothing beyond a stray snide comment, and was generally disrespectful of his colleagues, the committees’ assignments, and witnesses.

Probably much the same as what he did in college. Which might explain why he won’t release his college records.

The only truthful thing Obama has ever said: “I’m good at killing people.”

The VA healthcare system cannot be reformed, it need to be outright abolished.

Long lazy know-it-all knew he could pass the buck to the previous president, so he did nothing, heard nothing, but said he knew everything.

Hey Obama I found something you arent’ getting enough credit on!

I believe it was a day or two after the scandal broke that Sean Hannity played a speech by Obama in which he addressed the problems at the VA. I came in on the broadcast just after the clip started playing. It sounded as if he were responding to the scandal, but after the speech Hannity revealed that it was made during O’s campaign in 2008. Obama was fully aware of the VA’s problems at the time. (Hannity went on to play similar sound clips from 2010 and from O’s 2012 campaign.)