Sad Trombones: Fails to make it to the General Election 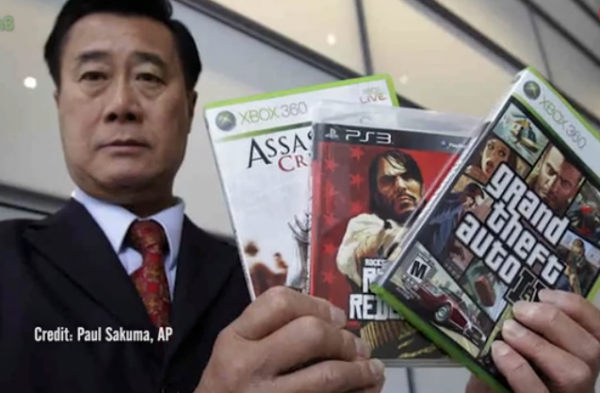 When I voted in California’s June primary, I chuckled when I turned to the “Secretary of State” race and found a familiar name: Leland Yee.

But it’s a sad commentary on the quality of California politics that Yee managed to pull nearly 10 percent of the vote! 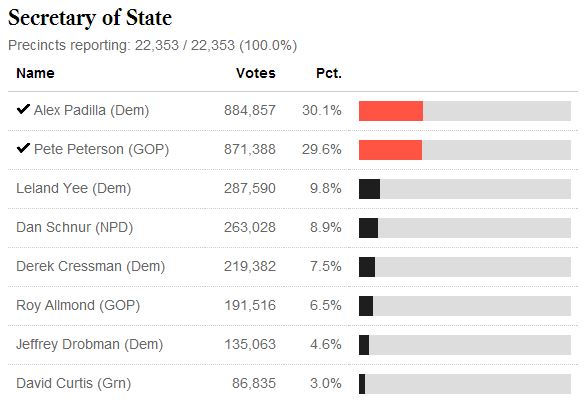 Legal Insurrection fans may recall that Yee is California’s former state senator who was recently charged in a federal gun-trafficking case. As I mentioned that Mexican authorities were reported to be giving former US Marine Andrew Tahmooressi the legal treatment reserved for gun-runners, I thought it was time to check up on what was happening to a potentially real one.

The federal judge handling the case issued a gag order on the evidence:

Over the objections of reputed gang figure Raymond “Shrimp Boy” Chow’s lawyers, a federal judge has ordered that the government’s evidence in a sweeping criminal case that includes political corruption charges against state Sen. Leland Yee must be kept secret for now.

U.S. District Judge Charles Breyer imposed the restrictions Monday on every lawyer and defendant in the case, finding the material should be kept under wraps while both sides prepare for trial. Breyer rejected the free speech arguments of Chow’s lawyer, J. Tony Serra, who insisted he should be able to reveal evidence to combat the government’s public charges.

Under the so-called protective order, dozens of defense lawyers will not be able to disclose evidence they receive from prosecutors, who are required to turn it over under U.S. Supreme Court precedent. The order, however, would not necessarily apply to evidence later contained in publicly filed court documents.

The reasoning? Breyer is worried about reputations.

“I was the judge that authorized the — some of the wiretaps in this case … I am genuinely concerned about people who appear in some of these wiretaps not being besmirched by allegations or speculation as to whether or not their conduct was criminal,” he said, according to an excerpt of the hearing’s transcripts obtained by The San Francisco Examiner.

Of course, perhaps the time people should worry about reputations is before they hang out with drug-dealing gang leaders? But that’s just me.

Some of the local news outlets have begun digging into state senate voting records, tying it into the allegations of political corruption Yee faces. For example, the San Francisco Chronicle compared Yee’s record to campaign donations received. Astonishingly, they find that Yee’s votes usually served his donors more than his constituents. 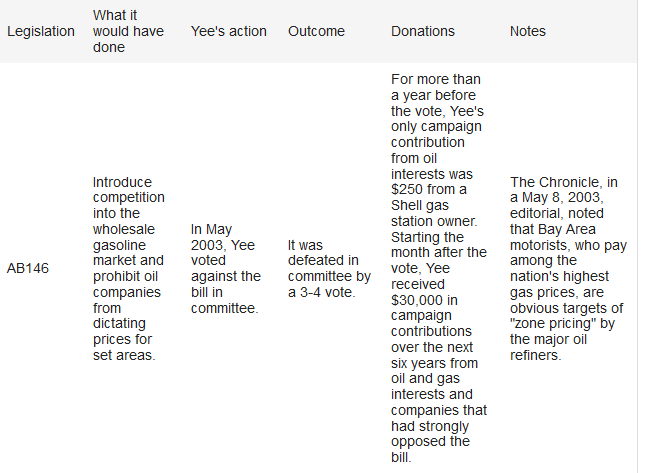 Actually, Yee’s fate became a discussion point in the race for the state’s Attorney General:

Republican candidate Phil Wyman, a former state senator from Tehachapie, wants Yee to pay for his alleged crimes with his life.

“If he is found guilty of those, he would be, under my understanding, subject to capital punishment,” Wyman said Thursday. “And I think that would be richly deserved if he actually did those things.”

You have to give California credit for having some real diversity in our ballot choices.

If that’s what a court determines Yee did, he’d is probably glad Wyman doesn’t make the cut in the primary election held Tuesday.

A lot of fraud going on there.

I think many of his votes were ‘monkey wrenching’ in nature. Disgusted Californian’s wishing to stick it to the powerful elites running this state. We’ve had it.

i doubt that: ignorance is bliss and we’re surrounded by happy people.

is this a great state or what?