Demands SJP “cease representing itself as an official Vassar group, pending these investigations” 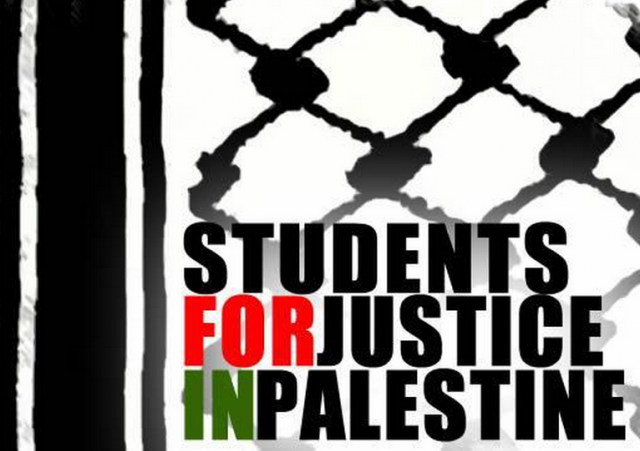 Earlier today I posted how Vassar anti-Israel group’s unhinged social media sparks student bias complaints.  The social media campaign by SJP initially was a reaction to my speech at Vassar on May 5 against the boycott of Israel, and then grew more vitriolic in the following days.

The following email was just send by Catharine Hill, the President of Vassar College with regard to the conduct of Vassar Students for Justice in Palestine.

To the Vassar Community:

I am writing to condemn a racist, anti-Semitic graphic posted to the Tumblr online site affiliated with the Vassar chapter of Students for Justice in Palestine (SJP). In response to this posting, the college is initiating a full investigation and action on the matter under established college procedures. SJP Vassar is a Vassar student “preliminary organization,” an initial status required of all student organizations as they seek full certification by the Vassar Student Association (VSA). I am requesting VSA review of the SJP’s pre-organization status. The college is also investigating the SJP’s online posting as a bias incident under college regulations. I also request that the SJP Vassar membership take responsibility for its actions and cease representing itself as an official Vassar group, pending these investigations. Vassar College is committed to free speech and academic freedom, but we condemn racist, hateful speech.

While the email does not specify the graphic, it likely was this graphic, which is just one of a series of anti-Zionist white nationalist and neo-Nazi social media posts by SJP: 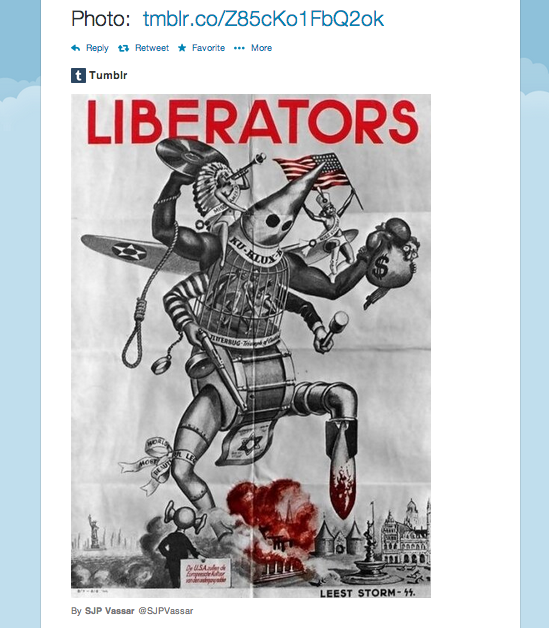 A concerted effort by the excellent alumni group, Fairness to Israel, added extraordinary pressure on the Vassar administration over the past few days. See what can be done when people stand up for the right things? http://fairnesstoisrael.blogspot.com

Yep, it was carried out well.

Well, when the RIGHT people stand up for the right things . . . they probably have the cancelled checks to stand on, too.

College administrations these days ignore conservative students and media every day. Ordinary citizens have no say at all, even elected officials concerning public institutions.

The one thing that always gets their attention is when major donors and/or fundraisers have a concern (or a little wish).

The poster is actually a WWII Nazi propaganda poster displayed in the occupied Netherlands:

A seriously odd choice for SJP to post since it’s a grab-bad of racist, anti-Semitic, and Anti-American cliches.

Well, yes, there was considerable discussion of that yesterday.

I first saw the poster a decade ago, and while I did admire the artist’s “no stone unturned” approach to propaganda, I hadn’t noticed that the figures in the birdcage-like upper torso were jitterbugging; a nice touch. I wouldn’t have learned that were it not for free speech – free enough to post and discuss the finest in Fascist propaganda, without being hounded by anyone who considers it too offensive for the human intellect to absorb. Of such things are worthwhile academic institutions made.

An announcement by any organization that it

is committed to free speech and academic freedom, but …

means that it is not as committed to free speech and academic freedom as it would like to appear. That “but” is the hand grenade in the wedding cake which spoils the whole occasion.

The great crime of the SJP is not its “racist, hateful speech”. That rubbish makes it annoying, but not intolerable.

The SJP’s crime is that it is devoted to suppression of speech and therefore suppression of ideas. If the Vasser administration had their heads screwed on right, that is what they would be fighting against. It’s an educational institution, not a day-care center with precious cherubs to shelter, or a country club which values decorum over all. “Racist, hateful speech” is something they should be able to handle without getting bent out of shape. Suppressing the SJP for that is the right action but for the wrong reason.

However, if it’s that or no action at all, then, I suppose, it’s full steam ahead.

Let’s take them at their word and DARE them to defend ANY other variant of hate speech. Anti Muslim hate speech, advocacy of rape, slavery and wife beating, homophobia and so forth. Let them defend their own statements.

I don’t condone squelching the speech even of evil cretins like these.

BUT if you request a charter from your school, and agree to certain restrictions they impose, that’s not a violation of your rights, that’s a voluntary contract.

I favor all taxpayer funds at all levels being cut off for institutions which make such unnecessary infringements on basic rights. But until then, sauce for the goose is sauce for the gander.

First recent case of a bigoted symbol in a University being real. And, of course, from the Left.

Let me understand the commenters. SJP’s crime is not that it is advocating, de facto, a second Holocaust, but simply that it advocates suppression of free speech.

A rather naïve approach, to say the least.

That’s my position. I consider any contrary position to be pusillanimous at best.

Elaborate on your accusation of naïve.

Give him a platform before a school of fish,

And he’ll hook the barracuda that torments them.

LukeHandCool (who was tricked into eating whale in a Japanese restaurant bar one time. Quite delicious. It was the raw slab of duck sashimi that lodged in Luke’s throat that almost choked him to death. His Japanese businessman drinking buddy was already drunk and thought the tears coming from Luke’s eyes were a result of the funny story he was telling Luke. All Luke could think was, “Is this how it ends? I guess this would be one of those things that makes people look back and laugh. But I won’t be there laughing with them. Because I’m about to die if this slab of duck doesn’t move.”)

“As the mob gleefully destroys people’s lives, its members haven’t (yet asked): What happens when they come for me?” http://t.co/aAJ2TBct7q

This is more or less the insane vapid argument that crypto Nazi Glenn Greenwald uses. Some bizarre advocacy of utterly unlimited free speech no matter what. ESPECIALLY if it’s hate speech.

But you very quickly realize in Greenwald’s case and in this case with SJP that the ONLY speech they want to ‘liberate’ is Nazi hate speech. That’s it. Nothing else is ever considered, embraced or defended in any way for a second.

So if that’s what they want to do, fine. Let them. But let’s remember to tell everyone that the ONLY kind of speech they’re putting forth is antisemitism. Period. And let them embrace that too.