My speech for Israel and against the academic boycott was well-attended. 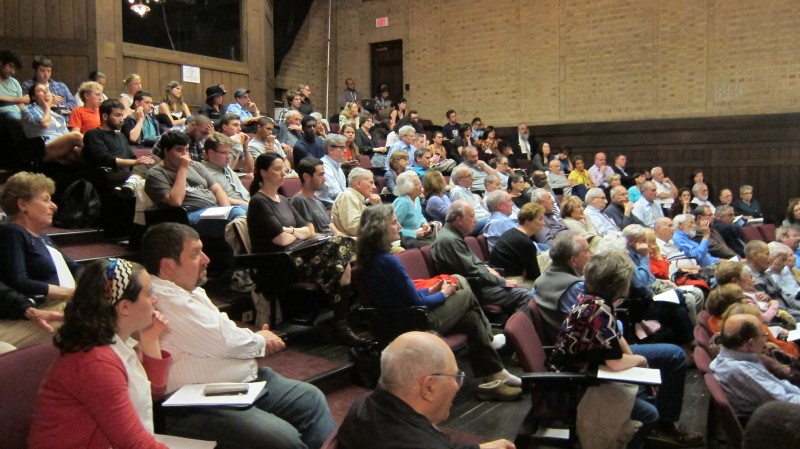 Well, I’m back from Vassar.

No debate, of course. But a good turnout. I didn’t take a head count but the room capacity is 158 and it was pretty full. A significant local presence from surrounding area synagogues, alumni, a very small number of faculty, and students.

There were no disruptions of any kind.

Although I couldn’t distinguish among the many students, I was told that several students from Students for Justice in Palestine were present. I’m glad they attended. It’s important that we preach not only to the choir.

The Dean of the Faculty, who co-signed the statement against the academic boycott of Israel, attended, as was the Professor who ran the Open Forum on March 3 which was the subject of a prior post.[*]

One thing I learned for the first time was that while most of the 39 professors did not respond to the debate invitation sent out by the student organizers, one of the professors who did respond said that I should be boycotted. Imagine that.

There was a very lengthy question and answer period, a lot of it focused on the role of faculty in the BDS movement on campuses.

All in all it was a big win … for Vassar.

[*This sentence was corrected, that professor was not a signatory to the letter.]

one of the professors who did respond said that I should be boycotted. Imagine that.

yeah…imagine that.
a coward hiding behind his self supposed laurels.

Well, in fairness to Vassar Professor Constance Consistent, Professor Jacobson is a Jew.

LOL good point. that scares the bejesus out of them

Which professor said you should be boycotted?

Good on yer for going, Prof.

Great job Professor Jacobson, will your recording include the Q&A? I would be very interested to learn more about the questions and ideas expressed and your thoughts. Because so many faculty are so dishonestly engaged in trying to influence students with propaganda, it is important for other faculty members to speak up. If faculty do not, then colleges risk being further objects of ridicule and sensible students feeling more isolated.

From your estimation of the audience profile is sounds like the community has a much higher degree of intellectual curiosity than the students and especially the faculty. Imagine that……

But When They Do, They Will Debate Bill Jacobson Anytime, Anywhere, to Defend the Dutch’s Right to Live Without Boycotts, Divestments, Sanctions, and Terrorism.

Great Job! the initial reviews are 4 stars. Everyone listened and asked good questions. Way to show the academic world (seems they’ve forgotten) what a good lecture is and how a dialogue can respectfully occur. Thanks again for all your time and effort.

Professor J – Apparently your opponents just want to talk among themselves and not with someone who actually understands the issues. Andrew Marvell describes you well:

“So much one man can do that does both act and know”.

We are proud of you. This should be on national news.

Thank you for doing it for all of us.

yes, very good point.
we thank you for this.wish I had the physical ability to do stuff like this and help.

I can provide a way to host it full if needed. can provide you ftp info to upload then my server will run conversions for streaming.

Excellent, Wm! The Vassar 39 even lacked the courage to come out and hear you.

Good work, professor.
Let’s hope you opened some minds — even if just a tiny bit.

Just viewed the video.
Bravo, Professor Jacobson!!
I do believe you hit that one out of the park…
Your scholarship and depth of understanding of the subject is indeed impressive!
Thanks you for doing this.

Also, thanks for the heads up on arch anti-Zionist Max Blumenthal being invited to speak last week at VC. As you know, he was likewise brought in by the SJP at Cornell to help them argue the BDS student gov’t divestment motion – which was defeated. Good to know that Blumenthal went down with that ship – may his defeats be legion!

Blumenthal was brought to speak at U. Michigan divestment vote, not Cornell.

These academic departments and programs were asked to sponsor Prof. Jacobson’s lecture at Vassar on May 5. None agreed to do so.

What percentage were students? And. BTW, what IS the female-male ratio in Vassar these days?

Perhaps it’s time to have special colleges (*) for the beleaguered male students (those that aren’t just enjoying the ratio). They could call them the Seven Brothers of something.

Into the breach and out the other side clean, with maybe a few people a little wiser. Well done, sir. Thank you

lol, sort of off topic but after doing the processing on my end I was testing and playing sections (making sure you could forward/rewind as needed to points in video) so I had your voice over pc speakers a lot.
my male cat was mesmerized by your noise LOL
staring at screen for minutes at a time w/o moving, he knows the good stuff 🙂
so you are now on the same plane as catnip 🙂

I particularly liked Prof Jacobson’s response to the question about the imbalance of power in university settings. He remarked that the difference between now and when he was in law school is that now the professors inject their political ideologies into class, even when unrelated to the course. It is very true and should be a bigger part of the writing on BDS. The reason campuses are a safe place for these anti-Israel crowds, and the reason these anti-Israel crowds grow on campus is because of the leanings of the professors.

Oftentimes hiring committees and the tenured decision-makers in a department create actual litmus tests of political ideology–especially on issues relating to Israel, the environment, and basic American politics. They often ask outright about political ideology or about views on Israel, Palestinians, etc.

BDS is not a student issue, it is an education issue.

Of all the excellent insight, that section was my favorite, too. Paraphrasing here — Prof. Jacobson observed the development of student activists seeing academic careers as a path to full time paid political activism.

Prof. Jacobson’s presentation overall was so rational, so well-argued, so even-toned and gracious … really exceptional in the heated climate of BDS speech. Or of any polarized topics these days.

Watching the video, I couldn’t help but think Professor J looks like a throwback to a more respectable time in academia. Numbed by seeing so many strident, self-righteous, unprofessionally unprofessorial professors over the years, I’m shocked to find it shocking to see what should be viewed as an ideal archetype of the temperament and bearing of what should be expected of a professor.

In a nutshell, he’s sort of a walking, talking, one-man broken-windows theory of what it is to conduct oneself as a professor.

At the risk of being called an oxymoronic moron, I’d say his presentation screamed and shrieked of fairness and civility.

He went way, way, far out of his way to give his opponents a benefit of the doubt I feel is completely undeserved—hair pulling stuff—but I like to think that if I were a professor, I’d feel compelled to eschew the easy soap-box antics and do the same.

He won by being the visiting team, playing in their stadium.

He won, after their cowardly 39 separate, individual instances of boycott, by continuing on, and not stooping to mocking their cowardice (as I’d have been tempted to do, and should be done by others).

He won not only with logic and substance, but in style points, also.

As he said, referring to the ASA vote, what matters is who shows up.

He showed up. They didn’t. We hear so often these days of the supposed “adult in the room,” but we just saw an adult in the faculty lounge.

An adult in the faculty lounge. I’d sooner expect to see Sasquatch cruising down the Sunset Strip.

And if I may be allowed just one final football metaphor …

That’s some 200 miles less than the drive from Ithaca to Poughkeepsie.

An academic boycott is an abuse of academic freedom. The Vassar Alumni and other supporrters of Vassar ought to use the power of their check books to boycott the 39 by demanding that their tenure be revoked and that they be sent packing.