Two down, if Obama would give instead of accept a resignation, the day would be perfect. 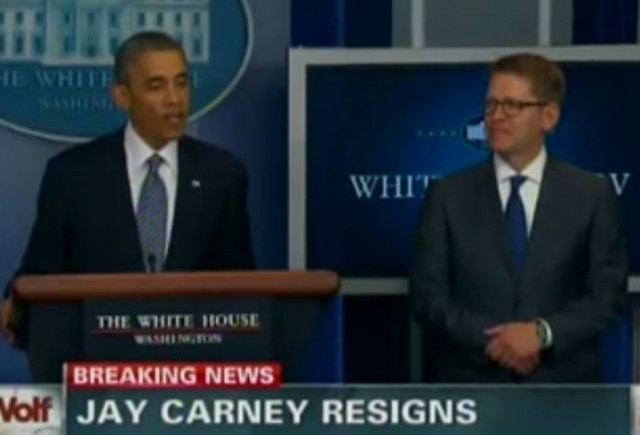 From the archives, Jay Carney was the worst, most prevaricating, most obstructive Press Secretary in memory:

RT @EricSilverUSA This is the quintessential example picture of the beta male phenomenon of the Obama years. pic.twitter.com/QzcphNv4G9

“No one can be worse than Gibbs” – me being an idiot in 2011. Not making that mistake again. I expect the bar to be raised.

@PressSec announcement is now sharing double billing on our home page with Shinseki, which I guess was the point… http://t.co/X6f20n5D7Z

UPDATE: Doesn’t look like anything is going to change: 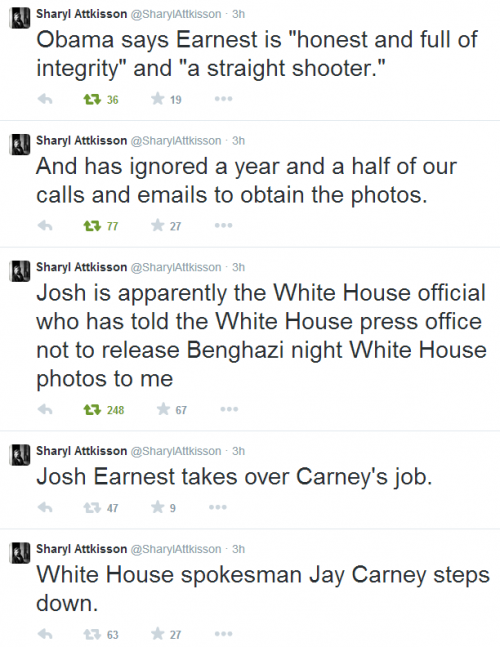 Where will Carney take his Orwellian talent for double-speak next?

We’ve gone from Carney to Earnest? Is Obama reaching for a little gravitas in the press office?

Next at 5: Shinseki keeps journalists waiting for 4 weeks at his first WH press briefing. Meanwhile at the VA, Jay Carney claims that America “doesn’t have any veterans”, and when confronted by the facts, backpedals to say “they still exist, but we have them on the run.”

Has anybody seen the pic of Carney and Obama in the midst of an awkward man hug during the announcement?

It gave me a good laugh.

Those twitter pics weren’t up when I wrote that…

I confirm that. I went to dig up a link for you because I agreed it was hilarious, but when I got back five minutes later the twitter photos were up.

This Jacobson feller is like some kind of mad internet ninja wizard.

If Obama we would have Biden as President. That’s an improvement.
The only one dumber would be Al Gore.

Carney was not good at it, but who could be any good at slinging the depth and breadth of horseshit he was expected to sling?

To have voluntarily been the Obama administration’s press secretary for so long makes Jay Carney one of our proud nation’s greatest masochists.

“Bobblehead” Gibbs was an embarrassment to the PR profession – Carney was just downright mentally ill.

Is he kissing Obama’s lack of a bicep in that pic?

There is a reason why they do these things on a Friday for a reason. People tend to turn off on weekends and do not pay much attention.

For what is usually a pretty slow news day, thing are sure happening fast. These two resignations will give the talking heads a lot of fodder for the weekend.

Did Obama find out about Carney’s resignation while watching TV?

“with all that Soviet propaganda art on his walls, Jay should have remember what happens to expendable officials who lose the confidence of the revolutionary regime.”

Just got an email – looks like I’m out as Obama administration Doughnut Czar.

The good news is that Carney has to live with himself, and try to sleep, for the rest of his life.

I’m sure his wife and children admire his loyalty-

..as she read the children bed time stories about the Legendary Pavlik Morozov.

Shinseki and Carney, both gone, same day. When Obama comes in off the golf course tonight and turns on his TV, boy is he gonna be surprised.

I don’t know why you guys are all blaming Jay Carney for being a bad press secretary. He was just the messenger.

My theory is that he is a sane man who has an honest bone somewhere in his body, so that he never could quite believe nor carry off the lies he was required to tell. This stands in contrast to John Kerry, who doesn’t think critically about what he is asked to say, and Susan Rice, who is comfortable with being mis-informed.