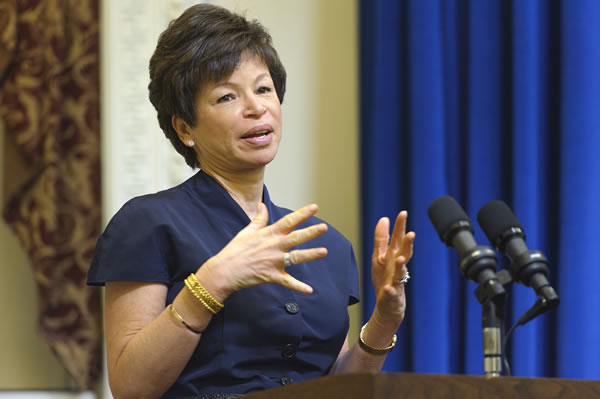 Why would any conservative believe anything Valerie Jarrett says about what John Boehner promised to do?

But seriously, what reason would Valerie Jarrett have to be telling the truth when she says this?:

President Barack Obama’s top adviser and confidant [sic] told a group of global elites on Thursday in Las Vegas, Nevada that House Speaker John Boehner (R-OH) has made a commitment to the White House to try to pass amnesty legislation this year…Valerie Jarrett, Obama’s senior advisor, told attendees at the yearly invitation-only SkyBridge Alternatives Conference that Boehner would help the White House make a push [to] get immigration reform enacted in the next three months.

I can’t think of a reason to trust her. I can, however, think of a reason or two why she would lie. The first would be to get people on the left pumped and enthusiastic about amnesty’s chances. The second would be to cause the right to start railing at Bohener and calling him a traitor. There’s no real downside to inciting a civil war among your opposition.

Boehner has denied making any such promises to Democrats, by the way. And Jarrett herself has backtracked and offered the following clarification:

What does Boehner really intend to do about illegal immigrants? He may buy the idea that Republicans have to do something about this—or at least appear to do something about this—in order to appeal to Hispanic votes (I disagree that it would woo their votes from the Democrats, but he’s not consulting me). He also knows that the GOP’s big-money donors seem to want immigration reform passed, and he needs to placate them to keep the money flowing. So he likes to indicate that he would really really love to pass something of the sort (see also this). But perhaps he’s torn (or hedging his bets), because every time he says these things he is careful to add an interesting caveat, to the effect that “no action is possible until President Obama proves himself a trustworthy partner to Republicans.”

Does that seem very likely to happen? That’s Boehner’s out, I think, in case he decides not to do it or in case he can’t convince enough Republicans to do it. He can then say to everyone who wanted it, “I tried, but I couldn’t succeed because Obama’s not a trustworthy partner on this.”

Der Jarret also has a Secret Service protection detail assigned to her, probably nothing equivalent to the five helicopters and fifty six agents that accompany Dear Leader on his every golf outing, though. What was it, 171 outings at last count?
I can just imagine Valerie, holding Barack’s hand while gently patting it reaxssuringly the night of 9/11/2012, after he and Reggie were finished, consoling Obama, telling him that everything would be all right very quickly, the very troubling matter of an American Ambassador being killed by the very al Qaeda he said he permanently vanquished would be dealt with effectively by his friends in the media and his campaign team, Dave, Jim, and Stephanie. “Jut look at how Ezra (As in Klein) and Marissa (as in Mayer)handled John McCain and Sarah Palin in 2008”

Jarret is evil and Boehner is stupid. I can’t trust either one. Neither will do anything except to drive this country to ruin.

The answer is neither.

Valerie Jarrett is slightly left of old Joe Stalin and a devote Obamabot. I would not believe her if she said water is wet.
John Boehner is a wimp with little or no integrity or courage.

Boehner just got through telling The Hill in no uncertain terms that while he would like to be able to bring up several bills to deal with immigration one piece at a time, that it was currently not possible because of mistrust of Obama over his abuse of power, and that it was up to Obama to move to rebuild that trust.

It was very plain.

How many times will the same false alarm be sounded on this? Has no one ever heard the fable of the boy who cried “Wolf!”?

you KNOW how jarrett would act, you do NOT know how boehner will. she will always support her party, he won’t.she’s evil and hes’s a dumbass.

I couldn’t have said it better.

Please, Kentuckians…go to the polls and vote for Matt Bevin. Let the cleanup begin.

How about if you were standing at the edge of a very high cliff?

gaslight. As in a psy-ops move by Jarret. These people are diabolical.

It is a mistake to characterize Valerie Jarrett as evil or some sort of arch-enemy. That might cause some people to overestimate her. She is a small-timer who is in over her head. Of course she is not trustworthy to report anything from any experienced person, much less a leader of the other party.

Obama, Jarrett, Pelosi, the Clintons, Boehner, et al are just run-of-the-mill crooks with access to unlimited funds….our tax dollars and all they can print via the equally-corrupt FED.

You may want to do some vetting starting with
http://www.discoverthenetworks.org/individualProfile.asp?indid=2418

Boehner seems to be doing OK so far at making Immigration Disaster not happen.

Why Jarrett is pretending to believe him isn’t clear. It can’t be so that when Immigration Disaster continues to not happen the Dems can shriek about how Boehner Lied!, because they were doubtless planning to do that anyway no matter what happened.

C’mon, it’s May before the November midterms. EVERYTHING is political now. Jarrett is just tossing a grenade into the enemy camp, as neo-neocon suggests above. It’s a Campaigning 101 move. It does this:

Stokes a rift between centrists and the right in the GOP.

Keeps immigration reform (amnesty to Jarrett) on the burner.

It’s a no-brainer, standard op for a national campaign. Still, I don’t trust Boehner’s word any more than Jarrett’s.

Boehner keeps mentioning immigration reform for the same Campaign 101 reasons – it’s a great way to point out that Obama doesn’t enforce laws he doesn’t agree with, that he would not secure the border as a first act in any immigration legislation, therefore Obama is responsible for the lack of action on immigration.

They are massaging the main points for the coming election.

Valerie is proud of her super-powers:
http://pjmedia.com/tatler/2014/05/20/obama-insider-tells-creepy-joke-during-commencement-address/

She, like Obama, boasts of the administration’s abuses of power.

Remember Obama’s commencement speech in 2009 when he threatened to use the IRS as a weapon against dissent?

Their sense of humor reveals a twisted corrupt character.

Trust to do what?

Trust to keep their word on everything they say they will do AND to do a lot of things they never talk about? I trust Jarrett to do exactly that!

Trust that every word they speak is subject to revision and update relative to the status of the subject matter at any given moment, to say one thing in public and another in private, and lie without the slightest remorse? I trust Boehner to do exactly that!

Trust that either will do what’s best for the country and it’s citizenry? I trust neither to do that!

I am really tired of railing against the “establishment” Republicans. Are they perfect? No. But what is the alternative?

I live in Illinois where we have Mark Kirk. Is he a perfect “solid conservative”? No! But the alternative is Barack Obama or Dick Durbin. In Massachusetts, conservatives sat out and let Elizabeth Warren get elected instead of “that dirty RINO Walker”. In Delaware, Chris Coons over Christine I’m Not a Witch O’Donnell. In Nevada, Harry Reid over Sharron Angle. I could go on. Paging Dick Mourdock… how did you lose in a state that went +10% for Romney? Were you not conservative enough?

I will readily support ANY Republican over their challenger because no matter how blue dog the Dem says they are, they are a party line vote for Obama’s agenda. If you want to stand on principle and lose, go for it. I will readily take the Republican alternative to the Democrat socialism.

So to answer your question: Yes, Boehner is infinitely better than Valerie Jarrett.

So you choose cyanide over rat poison. Got it.

Indeed. The Republicans are terrible. The Democrats are disgusting. Choosing between those two isn’t really difficult.

I trust Valerie Jarrett. I trust her to do whatever she can to attack this country, its people, and the Constitution.

I trust John Boehner to do whatever he is told to do by the Leftist media and governing elite controlled by Valerie Jarrett.

Some of the posters here fell for the Valerie Jarrett
Kabuki.

Jarrett’s bogus comment re Boehner was just that to
tap on the shoulder the knee jerkers who would rather bash Republicans than take on the Democrats.

Obama already signed his 2012 Executive Order for the Dream Act Amnesty and said he will do more Executives Orders for Amnesty.

Why does this amnesty boy get a pass as the one who is more in tune with the Democrats .

The Rand Paul Evolution: Rand Paul calls for ‘path to citizenship’ for illegals

“Immigration will not occur until conservative
Republicans, like myself, become part of the solution.

Rand Paul: GOP must get ‘beyond deportation’

Sen. Rand Paul on Tuesday argued the Republican Party needs to get “beyond deportation” in order to break through to Hispanic voters
—-
Then you have his dad Ron Paul when in Congress voted against every bill that would fence the border.

s/b Some of the commenters not posters