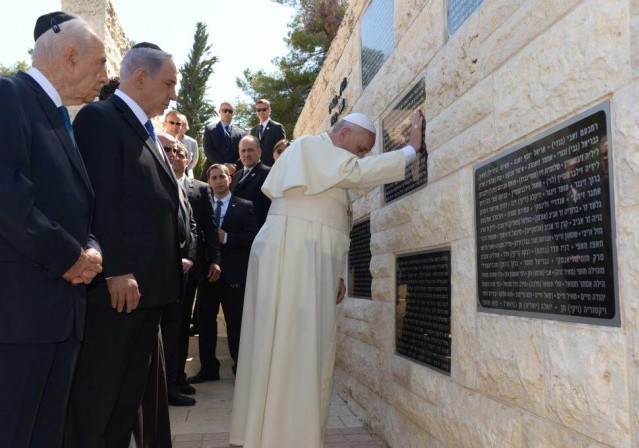 Because of the time difference, I was not able to watch the Pope’s visits in Israel today to the Temple Mount, Western Wall, memorial to terror victims and the Yad Vashem.

Here are some tweets and video of the events:

The Pope’s stop at the memorial to terror victims is a good contrast to the Pallywooded stop at the security barrier in Bethelehem yesterday:

“The Vatican officials explained to us that the pope didn’t pray against the separation barrier, but he prayed against the situation that forces such a wall to be built,” diplomat Lior Haiat said. “Therefore, we thought we need to show him why we built the wall. It’s obvious that the barrier is a result of something, it is not the reason.”

It also was significant that this was the first time a Pope has visited the grave of Theodor Herzl, the founder of modern Zionism:

And placing a note in the Western Wall (glad he didn’t try my wife’s climbing trick):

Photo: #PopeinIsrael | @Pontifex puts a note between the stones of the Western Wall in Jerusalem. pic.twitter.com/94xZwhYeay

Last but not least, from our friend Avi Mayer, the money shot:

Rapid-fire photography isn't my thing. That's the pope's hand. You'll have to take my word for it. 🙂 #PopeinIsrael pic.twitter.com/tQbo0HgkaJ

A wreath for Herzl? We’ve come a long way, baby, as the old commercial goes. This is a bit beyond the pale, actually. He didn’t have to do that. There are reasons why Catholics and Jews differ, and while it’s not my intention to go there now, let it suffice to say that Catholics don’t support the creation of Jewish confessional states any more than Jews would support the creation of Catholic confessional states. Being allies against common enemies is fine, but that’s a different matter.

The professor and others are likely aware that Herzl approached Pope St. Pius X in 1904 seeking support for his desire to found a Zionist state. The pope politely told him why the Church wouldn’t do that. Hence, this wreath-laying is quite significant, although I don’t know what Francis is trying to say.

Standing in Bethlehem with Mahmoud Abbas, the man who signed the check for the Munich Olympics terrorist murders, Pope Francis said: “Our recent meeting in the Vatican and my presence today in Palestine attest to the good relations existing between the Holy See and the State of Palestine.”

The “Palestinian Authority”, as it is commonly known, is a thoroughly corrupt, morally repugnant terrorist organization with no political legitimacy. Why Pope Francis is trying to lend it credibility suggests one of two things: He is absolutely clueless about Middle East politics [extremely doubtful], or, has an anti-Israel, anti-Jewish agenda [much more likely]. Being that he is JESUIT, and therefore his ‘mission in life’ is to seek perfection in ‘Ignatian spirituality’ and ‘social justice advocacy’, I presume that this new ‘pop culture’ Pope is going full tilt ‘social justice advocacy’ in this case and being correct or flat wrong matters not one iota to him/them, even if it hurts an entire righteous country.

In fact, given the ‘big picture’ of Pope Francis and his statements on abortion and homosexuality and ‘income inequality’ and other ‘social issues’ combined with his take on the perpetual ‘Palestine’ fraud and benevolent, righteous Israel’s never ending keel-hauling… it seems to me that Pope Francis is certainly perpetuating and continuing global deception spoken of copiously in the Bible… BEWARE FALSE PROPHETS!

If the surrounding Muslim countries would merely give Palestinians the right to immigrate into their countries, or even just the limited right to buy their own homes with their own money, the entire problem would disappear.

The negotiations between the Palestinians and the Israelis have always been between the wrong parties.

But that would remove their value as cannon-fodder, and create in those neighboring countries a new set of problems they have historically said they don’t want, and will happily kill Palestinians to prevent.

Israel is, unfortunately, full of memorials for victims of terror. I recall waiting for a bus in Jerusalem, and behind me was a plaque about two schoolchildren who were murdered. Not far from it was a another plaque; a different incident in the same place (French Hill). The young man of American extraction I was speaking to said he had been there, and if he hadn’t been hurrying after someone he might have been a victim.

BTW, the bus stop was an unofficial one, for a bus through Benjamin, which is in the territories. However, since I am not a Zionist, I don’t see why my historic right to settle in the land of my fathers differs because a particular secular state (of which I am a loyal citizen) decided not to exercise sovereignty there. Maybe if I was a true Zionist like Tzippy Livni or J street I would understand.

Very moving. I would love to hear the translation of the remarks when he met with the survivors(?) at Yad Vashem.