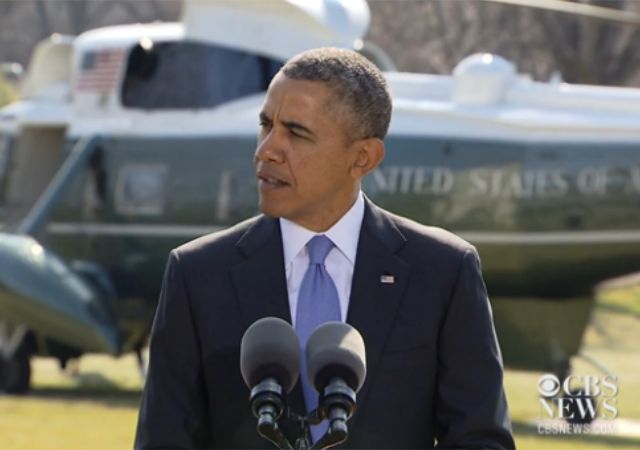 Fact-checker Glenn Kessler at the WaPo says that Obama’s gone and lied again:

In addressing a dinner of the Democratic Congressional Campaign Committee in Los Angeles, President Obama made a rather striking claim — that Senate Republicans have filibustered “500 pieces of legislation that would help the middle class.”…

…[W]hen you go through the numbers, there have just been 133 successful filibusters — meaning a final vote could not take place — since 2007.

But, even if you accept the way Senate Democrats like to frame the issue, the president is still wrong. He referred to “legislation” — and most of these cloture motions concerned judicial and executive branch nominations. In the 113th Congress, for instance, 83 of the 136 cloture motions so far have concerned nominations, not legislation.

Obama’s count also includes at least a half-dozen instances when Republicans were blocked by Democrats through use of the filibuster.

But that’s not all, although it would be enough to earn as many Pinocchios as the WaPo allows. In what Kessler refers to as “the biggest oddity”:

…the president reached back to 2007 in making his claim, so he includes two years when he was still a senator. On eight occasions, he voted against ending debate — the very thing he decried in his remarks.

And even Kessler at the WaPo knows it:

On just about every level, this claim is ridiculous.

We realize that Senate rules are complex and difficult to understand, but the president did serve in the Senate and should be familiar with its terms and procedures. Looking at the numbers, he might have been able to make a case that Republicans have blocked about 50 bills that he had wanted passed, such as an increase in the minimum wage. But instead, he inflated the numbers to such an extent that he even included votes in which he, as senator, supported a filibuster.

One of the saddest and most outrageous things about all of this is that, although most people on both right and left know by now that Obama is flagrantly mendacious, only the right condemns it (often impotently, for the most part) and the left either lies about it or applauds it.

Kessler’s playing a bit of rhetorical sleight-of-hand, too. If Obama speaks of 500 pieces of legislation filibustered, pointing out that there have only been 133 successful filibusters isn’t relevant. Obama didn’t say “successful”. Yes, Obama lies like a rug, but it’s easy enough to attack what he said, without making up attacks on what he didn’t say.

Pres. ScamWOW was using Farakan math. Which you or I cannot question. ‘Cause that would be white heteronormative rape.

From the Audacity of Hope to the Hope of Audacity.

The most evident point I can make out of this is the contemptuous disdain towards the American people. When you lie like that, is because you have zero respect for your audience or its intelligence.

But this guy is a snake charmer.
He’s got a flute and he’s got a turban, and he’s been using them. And the snakes keep dancing to his tune.

The Obastard-in-Royalty is a fraud. He thinks he’s King Obamislam. His goal is now and always has been to bring this country to its knees as a favor to his muzzie masters.

Almost ’nuff said! Washington Post is feebly attempting to regain some journalistic integrity by pointing out now what they refused to mention in ’08 and’12, that being that Obama is a congenital liar. WAPO cheerled for Obama until after he won his second term and then and only then did Kessler discover that Obama and the truth are strangers. Joe Wilson had it right.

Too late for WaPo; they that support the liars are worse than those who lie.

It would be a bigger news story if Obama did something competent that helped the American people while not lying his rear end off about it.

The answer is: Obama is just not that bright. He really doesn’t understand any of this.