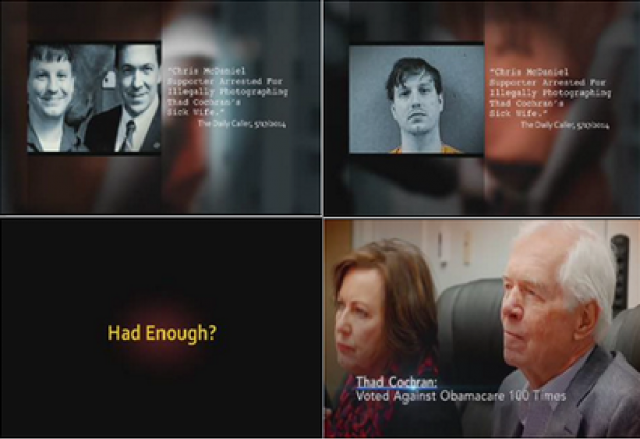 Supporters of Thad Cochran, including the National Republican Senatorial Committee, have all but convicted the campaign of Chris McDaniel in the possibly illegal — but definitely disgusting — photographing of Cochran’s wife in a nursing home.

While more evidence may, and likely will, come out, as of this writing there is no evidence made public that McDaniel’s campaign itself was involved. If the facts are not known by the June 3 primary, the political presumption of guilt may be enough to sink the McDaniel campaign.

What we know is that the guy who did the taping was a pro-Cochran blogger, but his lawyer denies it was part of a campaign effort.

Based on tweets today from a court hearing by a local reporter, it appears that the blogger did it to make a name for himself. He succeeded in that, although perhaps not in the way he intended. 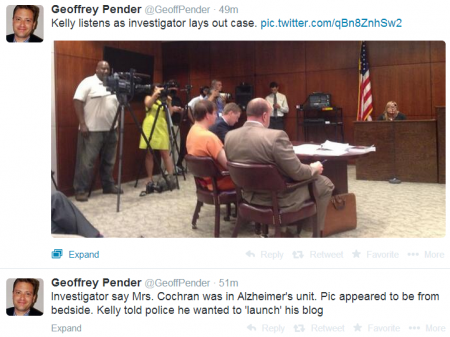 The big news today were three new arrests. A volunteer who contributed $500 to the McDaniel campaign, and is a leader of a local Tea Party group, was arrested for “conspiracy” with regard to the photographing.  He reportedly is a long-time Cochran opponent.  Two other people (for a total of three today) also were charged, one person for destroying evidence the other person for reasons not known as of this writing.

Based on live tweeting from the courtroom, it does not appear that there was evidence produced that showed the McDaniel campaign’s involvement.

McDaniel issued a statement calling for prosecution to the fullest extent of the law:

“As we have said since day one, the violation of the privacy of Mrs. Cochran is out of bounds for politics and is reprehensible,” McDaniel said in a statement after the arrests. “Any individuals who were involved in this crime should be prosecuted to the fullest extent of the law.”

It may turn out the McDaniel campaign was involved — but that evidence has not been disclosed if it exists. Yet Cochran supporters are acting as if the evidence already is there. If they turn out to be right, it’s for the wrong reasons.

With the June 3 election fast approaching, it’s not clear we will know the answer prior to the election. Part of the problem is that this was made public so late in part because the Cochran campaign sat on the incident for two weeks before going to authorities.

That uncertainty caused by delay works in Cochran’s favor, since there is a presumption of guilt being cast on the McDaniel campaign.

There is precious little time before the election to find out if that presumption of guilt is accurate.

UPDATE 6 p.m.: The D.A. has confirmed that there is no evidence of McDaniel campaign involvement:

Michael Guest, the district attorney for Madison and Rankin counties, told Simmons that he doesn’t believe anyone with the McDaniel campaign is involved.

For the last week staffers at the @nrsc have implied McDaniel is involved in a criminal conspiracy. Today, the DA said not true. #mssen

McDaniel has issued a demand that the Cochran ad in the Featured Image be taken down based on the DA’s statement:

McDaniel Calls on Cochran to Take Down Slanderous Ad

Chris McDaniel released a statement today confirming the Madison County District Attorney’s statement that no one with the McDaniel campaign is involved.

“This confirms what I’ve said all along. The violation of Mrs. Cochran’s privacy is an outrage and completely out of bounds. As the District Attorney has said, our campaign had nothing to do with this sad incident. This campaign should be about a real debate over issues, and we look forward to a return to that discussion,” said Republican candidate for US Senate Chris McDaniel.

“I call on Sen. Cochran to remove his incendiary ad tying myself and my campaign to any illegal activity. It is shameful for a sitting U.S. Senator to engage in such desperate slander and lies,” he concluded.

Looks like they waiting as long as they dared before reporting to make it difficult for McDaniel. Any longer and it would have been known to be a campaign ploy.

The guy who did the taping was a pro-COCHRAN blogger?

Yeah, I wondered about that too. Professor, is this right?

“…leader of a local Tea Party group…” I bet that gets some play in the press.

Is there a pattern here? Bevin in KY gets knocked down by bad press one month before the primaries and now Mississippi’s McDaniel is tied (falsely) to this story about Cochran’s bedridden wife.
It seems to me that if the TeaParty wants to play with the big boys they’re going to have to ANTICIPATE a smear campaign coming from the establishment within weeks of voting — and act accordingly.
The enemy is ruthless. Be on your toes and have a number of arrows in your own quiver to combat the attacks. Prepare for action before you know it’s needed.

Yes, there is a pattern.

“I call on Sen. Cochran to remove his incendiary ad tying myself and my campaign to any illegal activity. It is shameful for a sitting U.S. Senator to engage in such desperate slander and lies.”

Good luck with that, Mr McDaniel. I don’t see it happening any time soon. There’s too much political hay to be made.

The ad that McDaniel is referring to is actually a PAC ad and not a Cochran ad. Not Cochran’s ad to pull down.

I have seen a lot of people saying that this is a smear campaign by Cochran and a conspiracy by the “Establishment” to destroy the Tea Party. As someone who lives in Mississippi, most people, including myself, see this as McDaniel’s campaign falling apart. He did not have a good team around him and it is beginning to show. He was not the person I would have selected to go against Cochran because he has too much baggage. Too many ridiculous statements made on his radio show, a huge faux pas about Hurricane Katrina, not a lot of success with Legislation at the Capitol, and he really never had a message of what he could do for the state, just criticism about Cochran and a lot of innuendo. I don’t see it is the Establishment vs. Tea Party, I see it as a flawed inexperienced candidate vs. an seasoned and pretty well liked incumbent. I have never trusted the polls saying McDaniel was pulling close to Cochran because there has not been much excitement about McDaniel which is needed to unseat an incumbent. Occam’s Razor – McDaniel is not a good candidate and is not running a good campaign.

Also, regarding the high bail – Madison County always issues high bail. While the bail is high for these three defendants, it is also consistent with where bail is usually set.

If only RINO’s played hardball with Democrats they way they do with Conservatives! What a difference that would make!