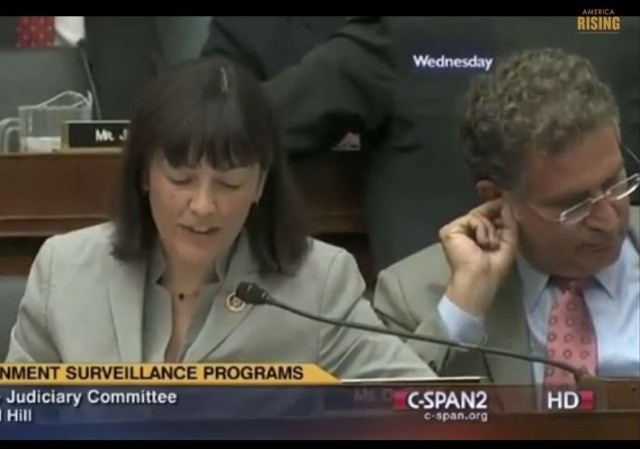 Democratic Rep. Joe Garcia in FL-26 likely will face off against Republican David Rivera. The Cook Political Report rates the race a Toss Up.

According to the polling, Garcia holds an early lead.

Or perhaps we should say ear-ly lead.

Saw this late last night when Andrew Kaczynski of Buzzfeed Politics tweeted it out:

This is some weird oppo: https://t.co/5IQWuC2sje

At the time there were about 50 or so views, now it’s gone viral.

Completely non-substantive, ridiculous, petty stuff. Actually, quite stupid. Is this what politics has come to?

The Ewww (yuck and ugh) factor is evidently a Democrat magnet.

Can anyone see past that scene to the reality that he obviously can’t remember that he’s on Very Candid Camera. I sure don’t want a guy representing me who is so obvious to his own image, not to mention his surroundings. what’s next – he pulls off his shoes and socks to trim his toenails between votes?

If he had any brains, he’d withdraw while he still has some dignity left. But like most donkeys he probably doesn’t give a rat’s patooee so he’ll stay in.

My God! Ear wax is extremely high in saturated fat and cholesterol.

We’d better hope the ear-wax eating voting bloc is not sizable or all is lost.

Note to self: avoid LI during lunch.

I think you’re giving them way too much credit.

I had one polysci prof who would come to class late every single time and then proceed to tell us stories about what was going on in his life.

I got nuthin’. Can’t touch that.

Might not have been ear wax, but a flea or other such critter.

If you turn up the volume all the way, you can hear him mutter softly,

“So that’s where I put that booger.”

Democratic Rep. Joe Garcia is just showing us his party’s thoughts on recycling, that’s all.

I thought that ear wax was a flavor offered in Bernie Bott’s Every Flavour Beans mentioned in the Harry Potter books.

Yeah, that pic could be a killer for Garcia. It’s not unlike what people envisioned Anthony Wiener doing in the NY mayor’s office when he ran for that office.

If FL-26 is a citrus growing region of Florida (or any other crop) if I were Rivera, I’d loudly proclaim that farmer constituents wanted to know what formed the foundation of Garcia’s food pyramid, and, if it’s ear wax and boogers, express concern that he would not represent their interests.

And if rumors are true that a video exists of Garcia scratching his ass and then sniffing his fingers, he might as well throw in the towel now.

But I wouldn’t touch that towel.

Once this goes viral, I expect Mr. Garcia will advocate for a ban on Q-tips,which contribute to the loss of potential food donations to starving, third world, (non-Christian), STARVING children.

Aw, c’mon. Cut the poor guy some slack. He said he had a hangnail.

Funny, but my hangnails are always on my fingers, not in my ears.