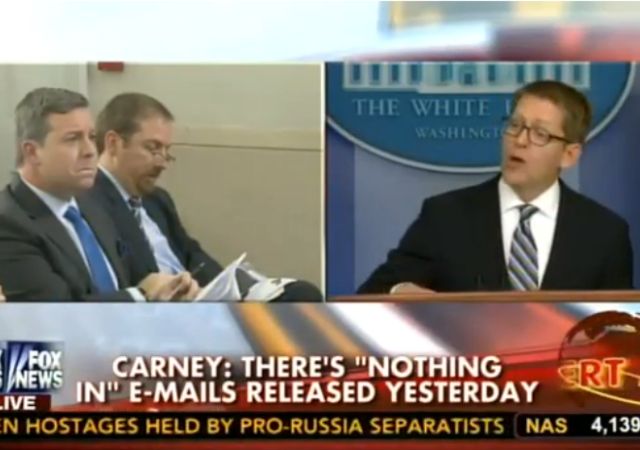 The exchange began when Henry asked Carney about a September 14th, 2012 email from deputy national security adviser Ben Rhodes to other administration press officials.  The email was turned over as part of a Freedom of Information Act lawsuit brought by the watchdog group Judicial Watch.  (Read the post at that link above for the background on that email and Carney’s response to another reporter, ABC’s Jon Karl, about it yesterday. TownHall also had a breakdown of yesterday’s exchange.)

On Thursday, Ed Henry asked Carney, “If the email was not about Benghazi, as you said yesterday and you say again today, why did the White House turn it over to a conservative group seeking information about Benghazi?”

That question prompted the tense back and forth exchange between Henry and Carney below. Additional video footage available at Mediaite.

Hillary Clinton to the father of Tyrone Woods: We will “make sure that the person who made that film is arrested and prosecuted.”

The regime not only peddled a false story about the attack; they invented a story that constituted an attack on our First Amendment rights if the subject is Islam.

I think the video story was one they planned to blame even before Benghazi.

Remember the embassy in Cairo caught some flack for tweeting an apology out over the video during the violent protest there. But the video had only been shown the night before in Egypt, the protest had been planned for weeks to demand the release of the blink sheik. The number of protestors might have swelled due to the video, but the violence was from the radicals there for the sheik.

If Obama could blame the video, though, it wouldn’t look as bad as if it were the islamists being violent for their terrorist friend.

The video had not been shown in Libyan at all.

Hillary was the first ranking official to refer to the video in a public statement, the evening of the attack. Was this just continuing the plan?

The press was an unwilling (?) ally, attacking Romney for bringing up terrorism at all that night.

It was not only a pack of lies, it was a well-planned pack of lies. It wouldn’t surprise me at all to learn that the Egyptian TV got the video from an American source friendly to Obama.

The offending video only had a few hundred hits on YouTube before being shown in Egypt. It was something that spread among the islamist cells, it went directly to government (then Obama pal Morsi) controlled TV.

House speaker John Boehner will announce the formation of a select committee on Benghazi, led by Rep. Trey Gowdy.