The administration’s War on Truth about Benghazi

The administration’s War on Truth about Benghazi

Talking points obfuscation directed from White House, newly released memo reveals, yet another piece of the Obama administration’s war on disclosure and truth. 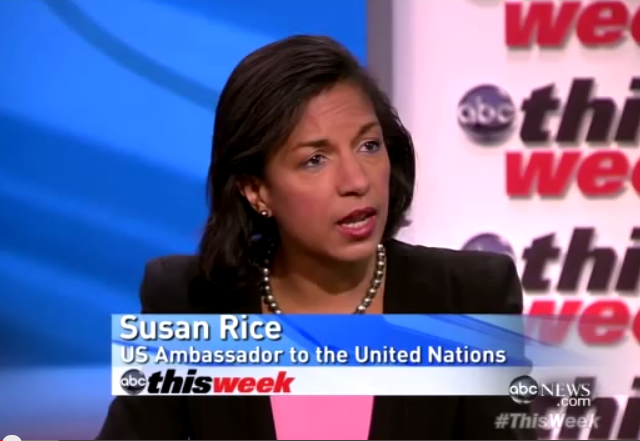 Sharyl Attkisson, former CBS News reporter shut down and cut off because of her dogged search for the truth, writes at her website, White House Directed Incorrect Benghazi Narrative:

Newly-released documents reveal direct White House involvement in steering the public narrative about the September 11, 2012 terrorist attacks in Benghazi, Libya, toward that of a spontaneous protest that never happened.

One of the operative documents, which the government had withheld from ​Congress and reporters for a year and a half, is an internal September 14, ​2012 email to White House press officials from Ben Rhodes, President Obama’s ​Assistant and Deputy National Security Advisor. (Disclosure: Ben Rhodes ​is the brother of David Rhodes, the President of CBS News, where I was employed until March.)
​
In the email, Ben Rhodes lists as a “goal” the White House desire “To ​underscore that these protests are rooted in an Internet video, and not a broader failure or policy.”

The email is entitled, “RE: PREP CALL with Susan, Saturday at 4:00 pm ET” and refers to White House involvement in preparing then-U.S.Ambassador to the U.N. Susan Rice for her upcoming appearance on Sunday television ​ network political talk shows.

The Rhodes email states that another “goal” is “To reinforce the President and Administration’s strength and steadiness in dealing with difficult challenges.”

Today, Sen. Lindsey Graham (R-SC) called the Rhodes email the “smoking gun” showing the “political manipulation by the White House” after the attacks.

Kudos to Jon Karl, he has been on this case since the beginning, and has been the subject of administration intrigue, as I documented in May 2013, White House-created “doctored” war on Jon Karl and Stephen Hayes falls apart:

A very, very minor difference in wording between the summary reported by Karl and Hayes, which was non-substantive because the summaries were correct in the context of the email chain, was used by the White House to leak a narrative via Tapper which then was used to attack all the reporting as “doctored.”  The White House then used the narrative it planted in the media to bootstrap on the reporting to justify the narrative as a political talking point, to which it clings based on that same reporting.

It’s just one distraction after another coming from the administration, with a mostly compliant media playing protector in the early days to protect Obama’s reelection, Dead Ambassador dragged through streets, MSM furious at Romney criticism of Obama:

If there ever were a doubt, no matter how small, that the mainstream media is deeply in bed with the Obama campaign, the reaction to the killing of the U.S. Ambassador to Libya and several other Americans should put such doubt to rest.

Beginning early this morning, when news was just breaking, the left-blogosphere and mainstream media, led by MSNBC, has attempted to shift the focus from the Obama administration’s failure to protect our embassies and for its apologies (both before and after the attack on the Cairo Embassy) to whether Mitt Romney was wrong to criticize Obama last night.

UPDATE 2:20 p.m. – Just when you think it could not get any worse, The Right Scoop has the transcript and audio of reporters coordinating questions prior to the Romney press conference.

“… (Disclosure: Ben Rhodes ​is the brother of David Rhodes, the President of CBS News, where I was employed until March.) …”

When CBS News is in bed with the White House, how can we expect anything except for it to “do” the news ?

Say…only for the sake of argument, because anyone who can read KNEW the emails disclosed months ago constituted a concerted cover-up of the facts in Benghazi…

that Rice was just box-0-rocks stupid and the victim of DISinformation when she went on ALLLLLLLL the Sunday shows with the “video” trope.

Explain Pres. ScamWOW and Ol’ Walleyes…in the presence of the caskets, and using them as props…telling the same LIES, and STILL assaulting the First Amendment, as they hugged the survivors of the fallen?

FOX News has a point: It is a good idea to make their reporters say “Fair and Balanced” and “We report — you decide” as reminders of what the reporters are supposed to be doing.

I want to see the emails regarding the creation of the commercial that the State Department broadcast in the Middle East regarding the video and who wrote and vetted Obama’s UN Speech.

Both of those actions happened well after the Sunday Talking Points Kerfuffle.

If this memo was not about Benghazi, then why did the WH originally produce it as a document concerning Benghazi for Congress?

Jay would have to take another 10 min. to spin the reply on that question. Bill,Hillary and Barack can be so proud of a spokesperson who has modeled his ability to take something so obvious and turn it inside out, backwards and forwards and present it as the truth. He just needs to tweak his ability to do it without such a condescending manner.

Yeah, if he tried that crap where I live he would get his face smashed in real quick.

The Racketeer Influenced and Corrupt Organizations (RICO) Act, time to put together one for elected and appointed officials if this crew is not a corrupt organization what is?

So the WH defensive circle gets drawn a little tighter. They can blame Ben Rhodes, cut him loose after setting him up with a cushy job with some major Dem donor.

Benghazi is the jugular of the criminal organization occupying the White House. It has other main arteries, but that one is closest to the head of the snake. The citizens’ committee reports’ most important line was about WH coordination of the video tale and subsequent gaslighting (psyops) with the Muslim Brotherhood and reps of OIC states.

Carney says Rhodes’ e-mail was about general unrest at the time of the attack.

Morell said CIA did NOT say the attack was caused by the video.

Where, oh, where did that idea come from?

Agree except for the “talented” part. Thinking about it, leave off the “magnificently” and i’m all in.

didn’t nixon resign for less than this?

Need to determine who issued the stand down orders which betrayed the people in the Benghazi consulate.

Need to determine who failed to tell Hilary of the requests for security.

When absolutely everything they have stated has been wrong from the very beginning you have to wipe the whole storyline.They cannot be ALL magnificent liars nor are they All traitorous . They simply had no idea & were scranpmbling to get a story out .

That was not the CIA . Those 2 guys were not your a average ex SEAL & there were 30 plus smarter & more canny than they who decided not to get bloody killed.

Obama’s speech in the UN about ‘The future does not belong to those who slander the Prophet’ sounds like something from Saudi Arabia. It was so bizarre that I have to think they were running scared. And still are .

Did anyone really believe this story about a YouTube video?

What is more despicable than Susan Rice’s network dog and pony show is the President’s UN speech two weeks after the fact. Plenty of time to sift through the actual facts. But no, he furthers the lies and misdirects.

Second, Hillary looking into the eyes of the grieving parents at Andrew AFB and tells them that they are going to get this Youtube guy.

I’ll make it as easy and simple as possible. President Obama is the one who ordered the stand down and who decided that the narrative should be about the video. Every thing else is a lie and a cover up, thats it!

Hillary is toast. Her whole WH plan hinged on getting past Benghazi.

I have not seen follow up on the citizens’ committee report that White House coordinated with Moslem Brotherhood and OIC states post-Benghazi, for the psyops fairytales. Who is asking for those emails, following those tracks. Everyone knows the gang in the WH is liars. That is not news. Whom they are lying with is news. Once again, the deep story is overlooked. The money is there.