Is tent about to collapse on Michigan unions?

Is tent about to collapse on Michigan unions?

Is SEIU Healthcare union 80% drop after workers given right to choose a harbinger of things to come? 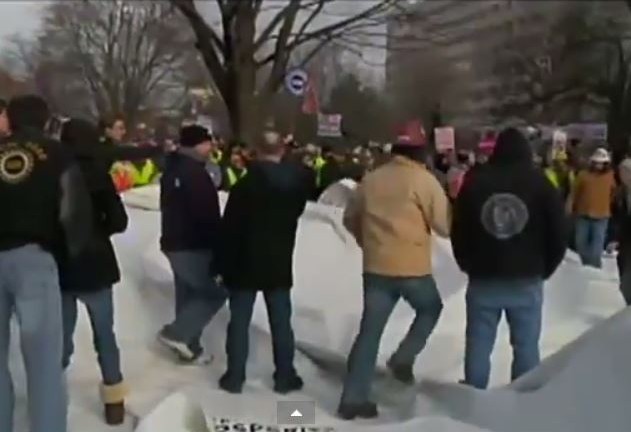 We do, Most chilling Michigan video — “There are people under there, oh my God”:

At 1:57 the woman cried out again “there’s people in there,” but to no avail. You can then see various people probing at large lumps under the tent, presumably checking if anyone was trapped. Yet the crowd continued with its profane taunts, as others lifted the edges of the tent and looked underneath, again presumably to see if anyone was trapped.

Democrats gave the SEIU a huge membership gift in 2005 when then-Governor Jennifer Granholm allowed more than 40,000 home-care workers to be unionized. The majority of the workers were independent contractors or family members who care for disabled relatives at home. But because the workers received Medicaid subsidies, they were suddenly reclassified as “public” employees for the purposes of unionization.
In early 2005, the Michigan Employment Relations Commission set a vote-by-mail election for home-care workers. According to the Mackinac Center Legal Foundation, of a total of some 41,000 workers who could join the new collective-bargaining unit, there were 6,949 votes to join the SEIU and 1,007 opposed to the unionization. The union did a victory dance and began collecting dues.

Then in 2012 Michigan state lawmakers passed legislation that excluded home-care workers from the state’s definition of public employees. The bottom has since fallen out of SEIU Healthcare’s membership. According to reports filed with the Department of Labor, in 2012 SEIU Healthcare Michigan reported 55,265 members. In 2013 the number fell to 10,918, a loss of 44,347 union members, or about 80%.

It’s too soon to know if there will be a more general decline in union membership. The most recent numbers show a slight drop, but the effect will not be known until existing union contracts expire:

The number of union members in Michigan grew by 4,000 to 633,000 in 2013, but the percent of employed workers in unions dipped from 16.6 percent to 16.3 percent as total employment grew faster than union membership, according to federal statistics released Friday. The number of workers represented by a union, including those who aren’t members themselves, rose by 8,000 to 656,0000 while the percentage dropped from 17.1 percent to 16.9 percent….

Michigan’s right-to-work law, which bans mandatory payment of union dues or fees, went into effect in March 2013. But many unions made sure they had contracts in place before then, so they won’t be subject to the new law until their agreement expires.

In a year or two we’ll know whether the law collapsed the tent on Michigan unions, as freedom to choose did with SEIU Healthcare.

I can hardly type through my tears of sorrow for the poor unions.

BWAHAHAHAHA! Not! I tried to fake empathy but it just ain’t working.

Everybody’s chickens seem to be coming home to roost. Couldn’t have happened to a more deserving bunch of thugs.

The SEIU ruling in 2005 was a bridge too far Extorting money from people who cared for sick or disabled family members at home made no sense and was reprehensible to anyone not on the receiving end of those funds.

Once a pendulum swings too far in one direction, it changes course and heads in the other direction.

It was a way fo0r the ‘rats to get public Medicaid monies into their own pockets via forced union membership.

Next they’ll pass laws forcing elderly social security recipients to join a union because they’re actually public employees, since they act as their own health care provider because they change their own ‘Depends’.

The rationale is the same, really.

Yup. And they won it. Moron.

I look forward to union leadership being classified as an organized crime syndicate and the lot of them going to a federal recreation facility under RICO.

There were numerous stories in the Michigan press about parents who received Medicaid checks for their disabled children in which the dues were automatically deducted. Many of the checks totaled a whopping $300 and would lose $50 to the unions. Unions which did NOTHING for these people, as they were the children’s parents. $50 often paid for things such as diapers, OTC medications, etc. These children, or older siblings were being cared for directly at home by their parents or family members, who typically had at least one parent who had given up a job to stay home with the child, and who most definitely missed the $50.