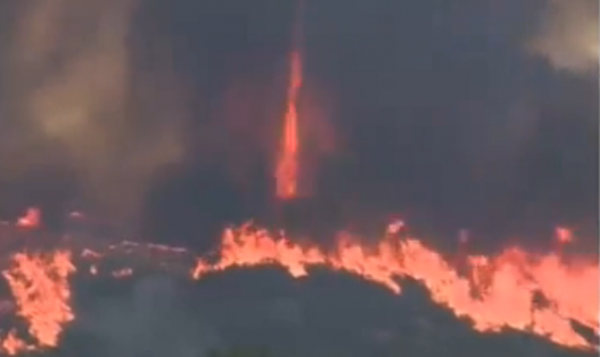 Earlier this year, the chilly nation was informed that it was experiencing a “Polar Vortex.”

Videotapes of many wildfires raging through San Diego county focus on another meteorological event that is now “hot”: Firenados.

Helicopters, military aircraft and extra crews, worked the fire, which fire officials said was only 5% contained as it burned 800 acres Thursday morning in San Marcos, home to a California State University campus and a heavily populated area.

…In broad daylight at noon, the fire blackened the skies in one San Marcos neighborhood and sent a “firenado” — a column resembling a tornado with smoke and flames shooting from it — rising and twisting into the air. The blaze forced the university to cancel this week’s commencement and other activities, officials said.

NewStationNation offers a glimpse in its video:

Air response has been very effective in battling back the blazes. And, what type of aircraft would you use against a firenado? A jumbo jet of course. The following video shows a DC-10 that has been used to pound the flames with fire retardant.

Aircraft and other fire response resources contributed by communities throughout the region have been effectively utilized to keep the damage as limited as possible.

Calmer winds allowed aircraft to make a heavy contribution to the firefighting efforts. Four air tankers and 22 military helicopters were being used, in addition to local agency helicopters.

Ten of the military helicopters were being used to battle a blaze that grew to almost 9 1/2 square miles on the Marine Corps’ Camp Pendleton. Despite its growth, the fire was 20 percent contained and was no longer considered a threat to communities.

On the other hand, another type of aircraft is getting a big “thumbs down”. There have been repeated announcements that people should not use their private drones, as they may disrupt emergency response operations. Interestingly, the news media has recently challenged the Federal Aviation Administration over its ban on “journalism drones.” Part of the report touches on their use in disasters such as the one San Diego county is now experiencing.

Integrating unmanned aircraft into the national airspace also has the potential to improve the safety of reporting under less-than-ideal conditions, and unmanned aircraft by their nature pose less risk than helicopters, the news organizations said. Reports on traffic, hurricanes, wildfires, and crop yields could all be told more safely and cost-effectively with the use of unmanned aircraft, it said.

The fact that so many fires have broken out and have unusual attributes for naturally caused wildfires in this region (e.g., starting early in the morning and blazing intensely hot very rapidly) has been noted by many fire response professionals. Now, at least 8 fires have been deemed to have “suspicious origins.”

Eight of the nine fires in San Diego County have a suspicious ignition point.

The fires were not started normally, sources told ABC affiliate KGTV on Thursday.

After a fire broke out near a business park, a man who was seen driving away from the scene was detained for questioning.

The man — whose name was not released — was taken into custody in Escondido in the mid-afternoon, police Lt. Mike Kearney said.

San Diegans are asked to be on the alert for a possible arsonist.

The good news is that the dry, hot winds associated with this Santa Ana are expected to dissipate. However, we have already had at least one fatality – a badly charred body was found in a homeless encampment near Carlsbad. Additionally, a small wildfire broke out in the south county area that was quickly contained.

It is likely to be several days before the current wildfires are completely contained. Stay tuned for more hot news.

Those fires are BIG. http://fox5sandiego.com/2014/05/16/wildfires-visible-from-space/#axzz31pVAawhl This picture is from Wednesday. As far as I can tell, none of the big fires are out. One of the Camp Pendleton fires has spread considerably. This actually makes sense. Camp Pendleton has enormous expanses of unpopulated scrub, and resources, including military resources, have been concentrated on the populated areas.

The Rancho Bernardo fire was still smoking yesterday evening, and emitting some glow last night, although nothing like the previous night. I hope they finally got it out, although the last reports had said “75% contained” for a solid day. Winds were mostly calm all night, and the marine layer did not make it into the canyons near I-15. This is probably just as well, because the winds that blow the marine layer in can be brisk, and cause a fire to turn abruptly. God bless our fire crews. Thanks to them and to the planners.

That is one important aspect of nature/the environment about which wealthy homeowners in the area do not give a hoot.

In so many trendy environmental causes, they don’t want man interfering with nature—unless the consequences threaten to burn them personally.

You need water to put out fires.

It would be nice if the coast’s wealthy homeowners felt a little more sympathy for California farmers and a little less for that tiny fish, the Delta Smelt, after all this is over.

Just like plant communities have their cycles, so do trendy environmentalists.

After the fires are all put out this month and surely this coming fall, they’ll complete their cycle of demanding water for protection of their homes, to demanding the Smelt’s water needs come before the water needs of the farmers.

It seems all communities have their cycles.

Apparently we have a water crisis looming, not because we are having a drought (normal weather), but because the brilliant legislature has reduced the reservoir capacity.

In a drought-prone area.

At the behest of the “environmentalists.”

The more I learn about the history of the “water crisis,” the less I respect the legislature.