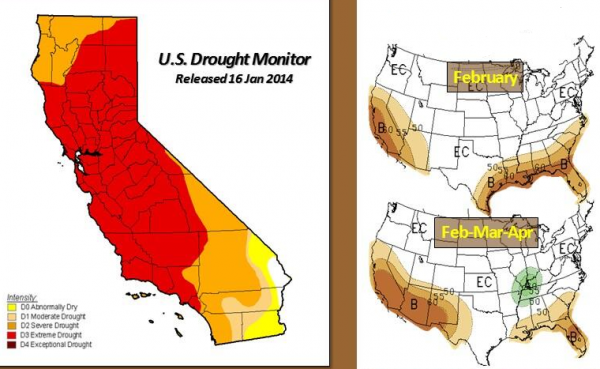 While the rest of the country has been enjoying the “Polar Vortex”, my home state has had a slightly different set of “climate change” issues to address.

Gov. Jerry Brown declared a drought emergency on Friday, citing a need for conservation efforts and a fingers-crossed message that he “hopes it will rain” soon during what looks like it will be the driest year on record in the history of California.

This is “perhaps the worst drought California has ever seen since records began being kept about 100 years ago,” Brown said at a news conference on Friday.

A piece in Breitbart notes that the drought may produce a spate of wildfires in the fall, when such disasters usually occur in the Golden State, and increasing tension between regions.

Reservoir levels in the north and central parts of the state were more depleted than in Southern California, but Brown still asked Los Angeles to do its part to conserve _ and gave a nod to the politics of water in the vast state.

“The drought accentuates and further displays the conflicts between north and south and between urban and rural parts of the state. So, as governor, I’ll be doing my part to bring people together and working through this.

These regional tensions often inspire proposals to break California apart, such as that offered by noted technology investor Tim Draper to split California into six separate states. However, those ideas are going to be as fruitful as our current drought-ridden fields.

Mr. Steinberg’s real beef seems to be that out-of-state businesses are again gaming California’s quarter-baked policies. The California Air Resources Board allows in-state businesses to comply with the cap by buying “offsets” from out-of-state enterprises such as forest conservation projects and methane digesters. The offsets, which are cheaper than permits, were intended to help businesses and prevent a jobs exodus.

…. But the upshot is that money is flowing from California businesses to out-of-state green companies. Meantime, energy costs will rise when the cap hits fuel suppliers next year. “I worry about what it could do to energy costs,” said Mr. Steinberg.

Finally, let’s follow the money. As Lorraine Yapps Cohen notes, by declaring a “water emergency”, our Governor gets to flood our bureaucracy with more funding:

Remember also that water department officials around the state must be paid their unusually high government salaries. Senior management and water department executives pull in more than $217,000 annually. With federal funds flowing in faster than water, a drought in California might mean a windfall for its government people instead of funding large water resources projects such as NEWTAP.

Dr.Ryan Maue of WeatherBELL Analytics has a great synopsis of exactly the type of climate change that can be predicted based on California’s history — of floods followed by drought.

Based on history, I can make a prediction, too: Brown’s declaration of drought will cause a flood of new regulations and agencies that will lead to economic disaster.

Based on history, I can make a prediction, too: Brown’s declaration of drought will cause a flood of new regulations and agencies that will lead to economic disaster.

Yep, plan on 50 years of drought, in true Soviet style.

I sure hope they can keep the Delta Smelt alive.

Yup. May be time to transplant the snail darter from TN to CA … just think how many federal dollars that could bring in.

I find it difficult feeling sorry for people who value their lawns and swimming pools over drinking water.
“Let them drink Coors.”
Pretty close to water, eh?

One has to wonder. Perhaps there is a direct correlation between what Californians do and the drought. There is a higher Authority – the Living Water – being ignored.

Looks like our house in CA sold just in time. I am free of that idiotic state. Lived through the good times but the times aren’t so good anymore.

We escaped two years ago. I lived in that once-magnificent, once-economic powerhouse of a state for 5 decades. I watched as its descent into communism went into free fall in the mid 80s when the ‘pubs began ceding the state to the ‘rats.

What has happened to my paradise since then is a tragedy of epic proportions. The environazis have a stranglehold on that state, and they’re all in bed together with the pols and the corporations, devising ways to screw the middle class out of their last dime. Not all of us are willing to just keep paying and paying and paying for it all, as illegals invade and public education classrooms become communist indoctrination venues for teaching perverse behaviors and socialist thought. The cops are there to protect their union jobs and raise revenue by writing tickets all day. Many couldn’t care less about crime, and many are corrupt. The ‘rat-run government gets greedier and more Hitleresque by the year.

We couldn’t take it anymore and headed for distant hills two years ago. But I cherish my memories of the jewel that California once was. It really does make me cry to think of what’s happened there, like standing by with your hands tied behind your back watching a beautiful child being gang-raped by thugs.

I have a dream^^^^^nightmare, of refugees from California moving east to Oklahoma.

We moved east from CA, but not to OK, so you’re safe. Heh. We moved to a red state not unlike OK, and found that we are more conservative than our neighbors residing here in the reddest part of the state. You would be surprised to know that, just in sheer numbers, there are more conservatives residing in CA than in any other state and, yes, that includes TX…….and OK.

We are finding that you southerners could learn a thing or two from we who have actually been subjected to living the nightmare while you were simply reading the headlines with a headshake and a “tsk tsk, California is at it again”.

Oh dear. The Woodies doing the reverse trek to Okie would not mean a guitar & folkie songs .

I heard it is so dry in California that the Baptists are sprinkling!

Moonbeam makes my head spin. I think he has had too much stuff over the years.

This is a historical rainfall pattern. I recall several times when the eastern half of the US was wet and California was in a drought. And vice versa.

California’s problems would be helped if the coastline tumbled into the Pacific like they keep promising. It would get rid of the water-hogging urban areas, the welfare clients, and the liberal elite, and leave the water to the farming areas.

Reservoir levels in the north and central parts of the state were more depleted than in Southern California, but Brown still asked Los Angeles to do its part to conserve _ and gave a nod to the politics of water in the vast state.

In the West it’s always about the water, them that gots it and them that wants it. The votes are in the South, the water in the North. Figure it out…

Yes, I wonder? Just what is the effect on California when they have changed their physical ecology so much by all the water they pump from Northern California into the deserts of Southern California, The massive aqueducts moving billions of cubic yards of water into the desert, Where it evaporates into the winds to be carried some where else, Could this be the cause of the persistent droughts, That are expanding across the state south to north?