Elizabeth Warren finally says she is not a …

Elizabeth Warren finally says she is not a … 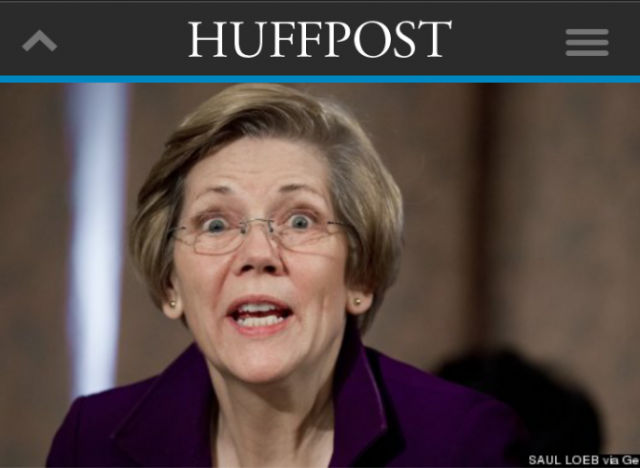 Saw this while traveling back from Chicago yesterday, on a tip from reader J.

Elizabeth Warren: I Don't Know Why People Call Me A Socialist http://t.co/zjjX1PpsNF pic.twitter.com/L906Qz5S6J

Perhaps she thinks “Communist” is a better fit?

Apparently the science is now settled on this.

Li’beth. Do you or do you not believe that the government should exercise more control over the economy? We all know her answer to that question, even if she dare not utter it.

Note to those who will say that socialism necessarily entails government ownership as opposed to mere control: That is merely an argument about the means employed and not the end desired. To the extent the argument has validity, the better term to describe government economic control without government ownership is fascism. I doubt Li’beth will prefer that term.

the better term to describe government economic control without government ownership is fascism.

True, that is one of several defining features of fascism.

Requiring government ownership is a defining feature of communism.

Fascism and communism are fraternal twins; both are particularly malignant, though distinct, forms of socialism.

Warren seems to have been careful to avoid specifying exactly which form of socialism fit her best. Though it hardly matters.

I’ve been writing that Baracula’s favored economic model is fascist for about five years now.

ObamaDoggle is a prime example. Classically, there are three elements in the model: BIG business, BIG unions, and government controlling both.

We now see modern innovations that include BIG business, BIG enviro, and government controlling both, for instance.

Nixon was also a fan of fascist economics. See Amtrak.

Of the Collectivist forms, fascism is the most dangerous to Americans, because it is not as clear an affront to property rights, and few people understand how it works or can identify it.

The difference between fascism and communism is obvious. QED.

That’s only part of the story. There are other important differences.

A biggie is that the fascists were/are intensely nationalistic. That’s the “Nationalsozialistische” part of NSDAP.

Because of that, there’s a problem calling the Democrats “fascist”, as they certainly aren’t nationalists.

Italian fascists were NOT nationalists.

German fascists were, but only incidentally.

Wilsonian fascists were, but, again, only incidentally.

Nationalism is NOT REMOTELY central to fascism. Not any more than making BIG unions part of the mix is necessary to fascism.

I think we can all agree that Hitler was a fascist. Here’s what he is reported to have said regarding socialism and ownership:

“Let them then own land or factories as much as they please. The decisive factor is that the State, through the party, is supreme over them, regardless whether they are owners or workers. All that, you see, is unessential. Our Socialism goes far deeper… What are ownership and income to that? Why need we trouble to socialize banks and factories? We socialize human beings.

I still can’t believe that Massachusetts elected this exploitive ‘Indian’ over Scott Brown just because she had a ‘D’ next to her name.

I hope the people in NH are keeping in mind that candidate Brown and Senator Brown apparently have highly divergent political views.

Dude, the people of Massachusetts are not tempted by conservative ideals.

Massachusetts is liberal. The country as a whole is liberal. Its about time we conservatives start admitting that rather than pretending we can listen to Rush Limbaugh all day while no one who doesn’t already agree with us ever hears a word he says.

We have to admit that so we can start changing how we do things. Not becoming more liberal, but changing the population’s opinions.

Getting conservatives nominated or even elected changes absolutely nothing.

The country as a whole is liberal

Since never. But Leftists trolls like to keep repeating the lie in the hope we’ll start thinking it’s true.

Socialists play this game where even if the government completely controls the means of production through regulation and takes most or even all of the profits through taxation that it is not socialism because people still nominally own their property.

But frankly this is silly and should be treated as such.

The Brookings Institution published a chart last week, showing that…

for the first time in modern American history…

more businesses are dying than being formed.

Which is EXACTLY what you expect from a fascist economy. BIG government HATES entrepreneurs. They are too hard to control, contra BIG businesses. Central planning favors having to plan only a few, favored actors.

Would she prefer Marxist?

You know, I thought you were just being a little bit of a jerk and putting in a purposefully bad picture of Sen. Warren. Then I went to the article and saw that your screenshot is the actual picture. She looks like an angry weasel.

So many lefties/socialists/communists get their panties in a wad when they are called what they indeed are. It’s probably a combination of ignorance…some truly don’t know what they are advocating, deceit, and self-delusion.

The truth’s in the Silly Putty.

As with Nixon, once you are forced to go on the record of what you’re not, you’ve lost control of the narrative and most people will suddenly start wondering if you ARE what you’re denying.

Too bad they couldn’t have worked in a label that she would’ve had to deny during her Fauxcahontas campaign.

Maybe they should have called her a redneck Okie from Muskogee and made her deny it.

I’m on Elizabeth Warren’s side on this one.

Why would people call her a socialist?

Her actions throughout her life have shown she has more shameless capitalist DNA than … than … well, … than Cherokee.

“It’s different when we do it”. Remember. That is how to comprehend the grinding contradiction between what Collectivists SAY and how they LIVE.

Warren has hers. And she’ll use every tool in the box to see that SHE keeps hers while redistributing YOURS.

So, I suppose anything to the “left” of “Screw you, I got mine, caveat emptor, who dies with the most toys wins, and the Devil take the hindmost,” is socialism?

“So, I suppose anything to the “left” of “Screw you, I got mine, caveat emptor, who dies with the most toys wins, and the Devil take the hindmost,” is socialism?”

I’m saying if the strawey straw man you just belched out were any strawier, you could soak him in a pot of water for hours and the moment you pulled him from the water, he’d still be so dry and strawey, he’d spontaneously combust.

Attacking Warren that she is a “socialist” makes you look just silly, foolish, infantile.

“Attacking Warren that she is a “socialist” makes you look just silly, foolish, infantile.”

Whereas you look sober, serious, and all growed up.

I guess we know where all the “down twinkles” are coming from.

DMS does not approve. Nor can he/she do anything but call names without explanation.

At least you concede that calling Warren a “socialist” is an attack, and not high praise.

Are you still pretending that Progressive = Democrat? Give it up, honey. This isn’t DU or Kos.

Someone’s been hitting the down ding.

LIZZY is that YOU?

Can’t call her a “red Indian” nowadays, I suppose.

Please forgive the reflexive anger of my fellow LI commenters.

I’m going to go all apocryphal Voltaire and say,

I may not agree with what you say, but it’s so lame, I feel like beating you to death myself.

What this thread needs is its own soundtrack. “Half Breed” by CHER:

Cher is a certifiable leftist loon, as we all know.

Sonny was a Republican.

When their daughter Chastity Bono came out as a lesbian …

Her Republican father told her he loved her and would always love her and be there for her.

Her Democrat mother became hysterical and would not accept it. It supposedly took Cher a few years to come to terms with it and accept it.

Cher, we got you, babe. We understand your type.

You owe an apology to dead plants everywhere.

She speaks with forked tongue.

Donald: I don’t know why people call me a “duck.” Just because I talk like one…

Let’s face it. Elizabeth Warren doesn’t know much about anything, let alone why people call her a socialist.

…not a ‘something that rhymes with…’, verbum sat?

People who think socialism is great. Who go on about it. Who mention socialist non-thinkers like Piketty and how great his inane theories are.

Who look to socialist Euro-trash countries as being fantastic — and to be emulated. Like Warren, Obama, and all the Democrat crypto-socialist.

But then when it’s pointed out that they are, in fact, espousing socialism, it’s all…. HOW DARE YOU CALL ME/HIM/HER A SOCIALIST.

But only because even today SOCIALIST is a dirty word in America. And rightly so.

Of course the banal, so called rebuttal goes along the lines of — well Obama/Warren/et al aren’t calling or implementing the NATIONALIZING OF THE MEANS OF PEODUCTION so that “proves” they’re not “socialist.

Well, #1 They can’t do that constitutionally anyway. Obama can’t just “nationalize” an industry with an Executive Order.

But then he doesn’t have to. As both he and Warren know they can effect exactly the same results by fiat via rules, TAXES, regulations, laws.

In effect, it’s a quasi-nationalization by making the industry and business so beholden to the state — and particularly the Democrats, that they are, to all intents and purposes, nationalized.

Why overtly nationalize the means of production when you the “government” and the admin state can covertly CONTROL THE MEANS OF PRODUCTION.