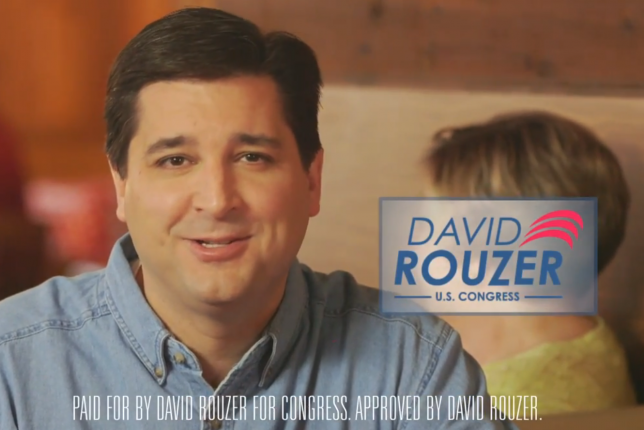 Longtime readers of this blog know we’ve been following David Rouzer since he was a member of our original 2012 Operation Counterweight list.

Rouzer waged a well-disciplined but ultimately unsuccessful campaign in 2012, dropping a hard-fought race to 8-term incumbent, Mike McIntyre, by less than 700 votes.

In April of last year, Rouzer announced that he would again be challenging McIntyre for the 7th Congressional District of North Carolina.

Then, in January, McIntyre officially announced he would not seek reelection in 2014. In many respects, this cleared the field for Rouzer who was now the beneficiary of strong name recognition, as well as a campaign infrastructure from the previous election cycle.

As we noted at the time,

Who the Democrats put forward as a candidate to replace McIntyre remains to be seen, but they can be sure they’ll be facing a tough opponent in Rouzer, assuming he successfully wins the primary again.

As was the case in 2012, North Carolina’s 7th Congressional district is considered to be one of the most vulnerable in the country in 2014. With the news of McIntyre’s retirement after nearly two decades, things just got quite a bit more interesting for Republicans seeking to flip another Congressional seat.

A few other results of note: By winning their primaries and avoiding a runoff, Alma Adams (D, NC-12) and David Rouzer (R, NC-7) are now on a glide path to election in the fall, as they are unlikely to face much opposition in the general election. We already rate NC-12 as Safe Democratic, and we’re now moving the open NC-7 to Safe Republican, from Likely Republican. The seat, which gave Mitt Romney 59% in 2012, is currently held by retiring Rep. Mike McIntyre (D). It should be a fairly easy Republican pickup.

While election night is still roughly six months away, things are looking pretty good for David Rouzer in NC-7.

The key to change in policy for this country has always been candidates. It takes a while for a new party or movement to figure out whom they should run.

McIntyre is one of the few Democrats I actually liked.

First and foremost, he was the one that gave me my nomination to USA.

Much more than that, however, he was one of the few to vote AGAINST Obamacare. He has also not been afraid to buck the Democratic line on other issues, unlike most of the rest of the lockstep sheep in the Democratic party.

*USNA, not USA. This site really needs an ‘edit’ button on posts.

If Wikipedia is correct, NC-7 has only had one Republican represent the district in the history of the universe. And that was a brief 3 year stint during Reconstruction right after the Civil War. And now it’s a “safe Republican” seat. Pretty amazing.