Condoleeza Rice withdraws as Commencement speaker at Rutgers after protests (Update — Does this mean Hillary should be banned too?) 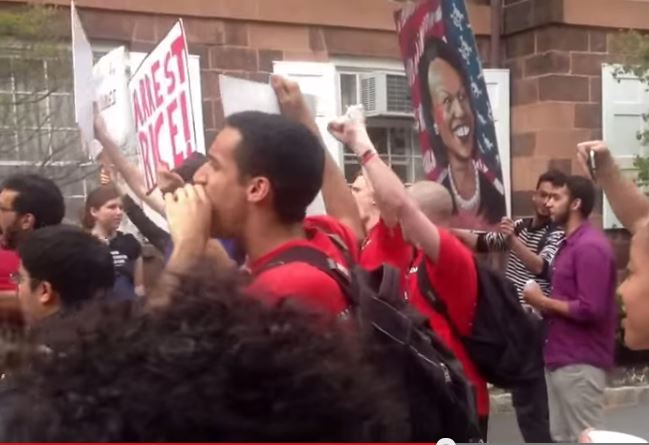 That’s the observation of Sonny Bunch to the news that Condoleeza Rice is withdrawing as a Commencement Speaker at Rutgers after protests against her and threats to disrupt the festivities if she spoke:

NRO reports that the following statement is to be released this morning:

Commencement should be a time of joyous celebration for the graduates and their families. Rutgers’ invitation to me to speak has become a distraction for the university community at this very special time.

I am honored to have served my country. I have defended America’s belief in free speech and the exchange of ideas. These values are essential to the health of our democracy. But that is not what is at issue here. As a Professor for thirty years at Stanford University and as it’s former Provost and Chief academic officer, I understand and embrace the purpose of the commencement ceremony and I am simply unwilling to detract from it in any way.

Good luck to the graduates and congratulations to the families, friends and loved ones who will gather to honor them.

Why are we always the ones concerned about distractions caused by other people?

This is why we lost the campuses. We let the load mouths and bullies have their way.

I blame Rice as much as the bullies. By withdrawing, Rice sends a message to other campuses that the tactic works.

I also blame the President of Rutgers, who according to NRO, turned out to be a wimp:

Protesting students had occupied the office of the president the other day, with signs reading “No honors for war criminals” and “War criminals out.”

In a statement when the controversy first erupted, Rutgers President Robert Barchi said, “We cannot protect free speech or academic freedom by denying others the right to an opposing view, or by excluding those with whom we may disagree. Free speech and academic freedom cannot be determined by any group. They cannot insist on consensus or popularity.”

Barchi had adopted a different tone this week: “I frankly wish from my point of view that this whole affair was not here right now because it’s distracting from what great things we’re doing as a university. … It does have us, for better or worse, right in the crosshairs right now.”

UPDATE: What about Hillary? Why should she be allowed to speak on campuses under this standard?

@EricBoehlert Does that apply to Hillary?

Most on our side shy from fights and the opportunities they present, which highlights the value of the few that don’t.

I can’t blame Rice because she was being the adult in the room and she didn’t want the students’ graduation to be about her. However she gives control to a few – most likely the majority of students would have enjoyed hearing her.

I blame the University for not dealing with the minority who f-up everything they touch. The school has allowed a small nasty group to make the rules for everyone. There should have been consequences for the professors and for the students – if they can’t allow others freedom of speech , why should they have theirs?

blame the University for not dealing with the minority who f-up everything they touch. The school has allowed a small nasty group to make the rules for everyone.

Strongly agree. Unfortunately the U is following the precedent that its own officers participated in in 1968, when they thuggishly seized their own colleges, whose administrators thoughtlessly yielded instead of suppressing the lawlessness. Horrible precedent, and needs overturning ASAP, as this current mob rule illustrates. ‘Hecklers veto’ doesn’t begin to describe the social damage.

“Cowardice” is the single most apt descriptor of current administrations, from cities to universities.

This is something that has to be pushed up from the grass-roots.

You and I have to firmly assert “This will not be tolerated” and mean it.

I am DONE with these people.

Did you notice on twitchy that a large number of “we did it” tweets were from Rutgers SJP?

Questions: Where are the voices of those who wanted her to speak? Why are we not hearing from/about them? Are they too cowered to speak up? Or simply not being reported?

Finally the other students are speaking out…

I wish there was some way to support them to let them know that speaking out is the only way to counter the douchebags Progs.

Higher ed, just like where K-12 is going with outcomes based education now renamed as the Common Core, is really pushing the idea that only certain values, attitudes, and beliefs are now acceptable. The poorly understood accreditation process and the Lumina Qualifications Profile and the ramifications of the White House’s A Crucible Moment report are all making a bad situation much worse very quickly.

I wish Dr Rice had stuck to her guns, but she is also deeply involved now in advocating for the K-12 version of these reforms. There was that CFR Report, her work with Jeb’s foundation, and Chairing a Center at Harvard devoted to “education innovation” in K-12.

Sad she lends her name to push K-12 ed change, but folds when asked to speak to the next generation in person.

The nation seems to be operating at the level of the vicious and vacuous high school clique in the film Heathers.

I admire and respect Condoleezza Rice, but she shouldn’t have withdrawn.

“Why are we always the ones concerned about distractions caused by other people?”

It is…in the main…a good thing. And Condi Rice has it in huge quantities.

But it has to be tempered with a pinch of “Breitbart they buttocks” street-fighter.

This comes more naturally to some of us, but it can be learned by all.

I suggest it is an essential quality in today’s WAR!

“As a Professor for thirty years at Stanford University and as it’s former Provost…”
I hope she edits the final version before it is released. Misusing “it’s” is my single biggest language pet peeve.

Its a very common mistake (running, ducking, and grinning)…

Condi is a class act. She picks her fights.

These ‘students’ probably wanted Bill Nye to come and tell them fairy tales about climate change, “the greatest crisis of our time.”

I blame Rice as much as the bullies. By withdrawing, Rice sends a message to other campuses that the tactic works.

This is a defensive line which must be held by the Rutgers administration. If the administrators aren’t willing to fight for what their school, or any school, must be if it’s to be of value, it’s too late for Rice to do anything about it.

Now, has the Rutgers admin surrendered to the mob? We can’t tell; sound bites do not a policy make. But if Rice – who just might know a little bit more about the situation than most of the great American public – believes that it has, then she might well conclude that parachuting into Dien Ben Phu would be mere quixotic folly rather than a useful blow for principle.

So, at this point, I don’t see much justification for blaming Rice at all. The criticism for being a walking testosterone-free zone should be on the president of Rutgers, not diluted by being spread amongst the blameless.

Remember…mockage is a great weapon.

In fairness, #Rutgers faculty members may be unacquainted with highly-accomplished intellectual powerhouses. Fear of “the other,” etc.—
Guy Benson (@guypbenson) May 03, 2014

Condoleezza Rice, as National Security Advisor to President George W. Bush, played a prominent role in his administration’s efforts to mislead the American people about the presence of weapons of mass destruction in Iraq and the existence of links between al Qaeda and the Iraqi regime,

WHEREAS the lies thus promoted led to the second Iraq war, which caused the death of over 100,000 men, women and children, and the displacement of millions of others,

WHEREAS Condoleezza Rice, at the very least, condoned the Bush administration’s policy of “enhanced interrogation techniques” such as waterboarding, and its attempt to present such techniques as legal,

WHEREAS Rutgers, as a public institution of higher learning, should educate its students about past historical events, not pretend they never took place,

WHEREAS a Commencement speaker, who is entrusted with speaking to graduating students about the direction of their future lives, should embody moral authority and exemplary citizenship,

WHEREAS an honorary Doctor of Laws degree should not honor someone who participated in a political effort to circumvent the law,

THEREFORE BE IT RESOLVED that the New Brunswick Faculty Council urges the Board of Governors to rescind its misguided decision to invite former Secretary of State Condoleezza Rice to deliver the keynote address at this year’s New Brunswick Commencement ceremony, and to award her an honorary Doctor of Laws degree.
—Rutgers faculty resolution

Note that that is larded with Collectivist tropes that bear no resemblance to anything true. Just a litany of moonbat talking-points.

This is just part three of the Democrat Party three part platform…
B for Big (Big government, banks, unions, donors, etc.)
H for Hate (They just hate all of us, period)
O for Oh Shut Up (Anything to get us off the stage)

There is nothing stupid or illogical about their actions. It’s just part of their philosophy.

Isn’t Obama, the president who has ordered more predator strikes than GWB, supposed to speak at UC Irvine? Where’s the outrage?

[…] have precluded a certain New York senator who voted for the war from speaking at Rutgers in 2007. Legal Insurrection takes a look at another speaker who wasn’t bullied out of her […]

Condi was foolish to accept the offer. Her concluding “Good luck …” is her subtle “comment” … primarily to the student body.

Clear case of the animals in charge of the Zoo.

Go back and look at pictures showing Condi playing on a grand piano and walking with those knee high leather boots.

That, my friends, is class of the highest order. So is this marvelous display of wordsmithing showing how to slap someone or something (who richly deserves it) silently.

It’s a State University. The Legislature needs to be involved. In fact, the States ought to take direct control of their universities.

Of course these students were small children when 9/11 occurred, they have no memory of the Iran-Iraq War which killed over 1 million people, not including the thousands of Iraqi Kurds Saddam gassed himself. They don’t remember the Gulf War, they weren’t even born when Saddam invaded Kuwait. And they weren’t really old enough to be paying attention when the Iraq War was in its most difficult stages, up through the surge, the kids graduating this spring were just going through puberty back then.

They get this crap from the anti-American leftist faculties we subsidize with our tax dollars.

Cut ’em off clean, I say. If New Jersey taxpayers approve of this garbage, they can pay for it themselves, and leave my money out of it.