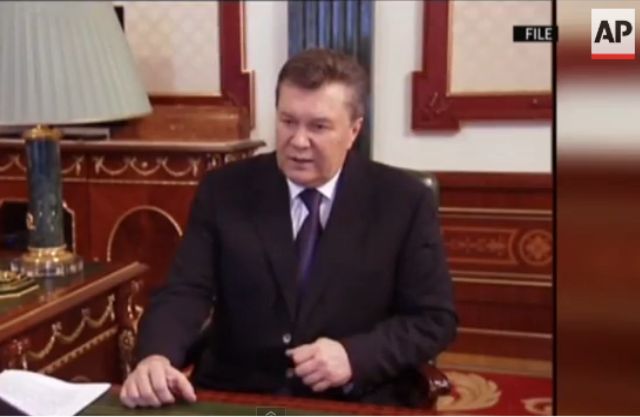 After voting Saturday to remove President Viktor Yanukovich from office, Ukraine’s Parliament on Sunday named its speaker to serve as acting President.

The speaker of the Ukrainian parliament, the closest confidante of freed opposition leader Yulia Tymoshenko, was temporarily handed the role of president on Sunday following the ouster of Viktor Yanukovich.

Yanukovich abandoned the capital on Saturday, heading to his native east where he denounced what he called a “coup d’état”.

Parliament on Sunday voted to give Oleksander Turchinov, elected speaker on Saturday, Yanukovich’s duties as president.

Parliament previously voted to return to the 2004 constitution, which would weaken the powers of the presidency and restore more powers to parliament.  It also voted to hold new elections on May 25th, according to CNN.

CBS News reports that Yanukovich, however, has maintained that parliament’s recent decisions are illegal.

The whereabouts of Yanukovich since he fled the Ukrainian capital were still not definitively known at the time of this writing.

A plane with Yanukovych onboard was denied permission to take off Saturday evening from Donetsk, a city in eastern Ukraine that is the president’s base of support, the State Border Guard Service said. Oleh Slobodyan of the State Border Guard service told the Associated Press Sunday that the plane did not have the proper documentation. It is not clear what the plane’s ultimate destination would have been. The president was driven off in a car from the airport.

Yanukovych did speak on television Saturday in the city of Kharkiv, near the border with Russia, accusing his opponents of trying to overthrow the government.

“Everything that is happening today is, to a greater degree, vandalism and banditry and a coup d’etat,” he said. “I will do everything to protect my country from breakup, to stop bloodshed.”

However, Yanukovych’s movements have not been accounted for since, and even his spokesman told the Associated Press Sunday morning that he does not know where his boss is.

It seems uncertain where things will go from here.

If you’re just catching up, you can follow previous coverage of events as they unfolded on Saturday at this live coverage link.

“What kind of government do we have?”

God bless Ukraine, and may they keep and preserve the best of their own government.

I cannot imagine Yanukovych wanting to leave all of his nice things that he accumulated as a humble civil servant doing the work of his people.

This is the same guy who spent time in a Soviet prison for stealing hats right off their owners’ heads. Once a petty street criminal….

A lot was made of this estate but land is cheap in Ukraine . As president he would be ‘given ‘ gifts & services ‘ like Mochelle & other celebrities are given $ 12,000 dresses / curtains aka extortion.

The grounds themselves were unusually neat & even landscaped & the animals had humane quarters ( including those there for dinner ) . Note the hygienic floors for the pigs !

Tha reason Ukrainians were so stunned wax that it was so unukrainian. I would have thought the Eco greenhouses would have been to the left’s liking . . Greenhouses themselves are not expensive just take an effort .

It’s easy to get upset at Yanuk for having all these shiny things, but, really, it’s not that he had them but that there is no opportunities for ordinary people. It doesn’t have to be a zero sum game.
I personally find his flashiness is gross, but he’s not any different from any other politico there, and there is no reason to expect that his successor(s) will be any different.
And, yes, land is cheap in Ukraine. A lot of Ukrainians have outsized dachas, not that big, but big.

Unless the flawed Governance structure is changed & Ukraine very quickly attracts investment ( unlikely in a corrupt system ) it is an indefinite future.

A unicameral Parliament that can change a constition at will ? Get out of here.

May 25 is too soon to find good candidates & new parties . ( given that they are banning some ) .

The stated intent to ban languages for education & business other than Ukrainian hits not only the East Russians but the many smaller ethnic groups including Jewish schools & businesses.( who is a thriving contact with Israel ) .

There is till the problem of disengaging from old contracts lawfully signed & favouritism can only be the result.

The Energy future is being gambled on developing fracking & conventional natural gas . The heralded reserves have not been validated & like Poland’s may come to little.or be too expensive .
Further they are in the region bordering Romania to which Romania has claims & in the traditional Donetsk basin in the east .

I can only see a United Ukraine muddling on ( & seeking massive loans ) .if the east does exactly what they did in Kiev then it is finished. After all they can simply repeat the ‘coup ‘ & refuse to participate. . They have every legal right not to acknowledge Kiev.at all – it is not even a secession .

Russia will wait this out a bit. Though it was designed to foil the Sochi Olympics , Russians just got more nationalistic & streaked ahead with a massive winning streak. Russians are pumped up .

I think it was very significant that the leaders of China & Central Asia (& Asia ) including Afghanistan! ) were in Sochi & western leaders missing. Korea & Japan are holding the 2018/2020 Olympics & all the attention is to the east. ( I follow Olympic politics ) .

Ok I was the only one on the guradian boards not impressed with Egypt either .

I can’t imagine Svoboda delivering this victory for the opposition and then laying it at the feet of Timoshenko.

I liked the wheelchair look. Though I can’t imagine a Ukrainian prison would not break you mentally & physically .

Ukraine needs to exile their politicians to walled monasteries where they can pray & meditate . The cycle of political retribution has to stop.