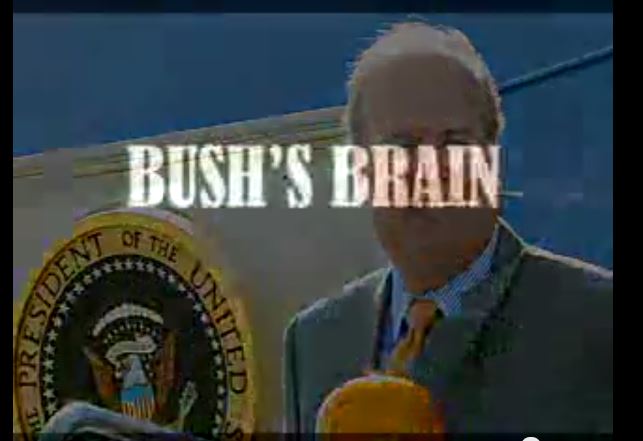 “Bush’s Brain” was the name given by anti-Bush folk to Karl Rove.

Rove is in the news for raising the issue of Hillary’s hospitalization. He didn’t use the term “brain damage,” despite people claiming he did.

A Washington Post analysis finds that the term “traumatic brain injury” to be “technically” correct:

Technically, Republican strategist Karl Rove was correct when he suggested that former Secretary of State Hillary Clinton suffered a “traumatic brain injury” after a fall in 2012. A concussion is the most common form of mild traumatic brain injury, according to experts in the field. It is caused by a blow to the head or an action that bounces the brain around in the skull, such as whiplash from a car accident.

Symptoms can include headache, dizziness, sensitivity to light and blurred vision, all of which can occur even when MRI and CT scans are normal, said Steven Galetta, a neuro-opthalmologist at the NYU Langone Medical Center in New York.

Rove’s comment that when Clinton appeared in public after recuperating “she’s wearing glasses that are only for people who have traumatic brain injury,” referred to a lens or lenses that the former first lady wore for a short period after her concussion and a subsequent blood clot that developed in her brain. Known as a Fresnel prism, the device helps treat double vision, especially for close-up viewing, experts said.

So Bush’s Brain spoke accurately about Hillary’s Brain. And the media portrayed it otherwise.

Oh, and was the real Bush’s brain, the one in his head, put in issue by critics? You betcha: 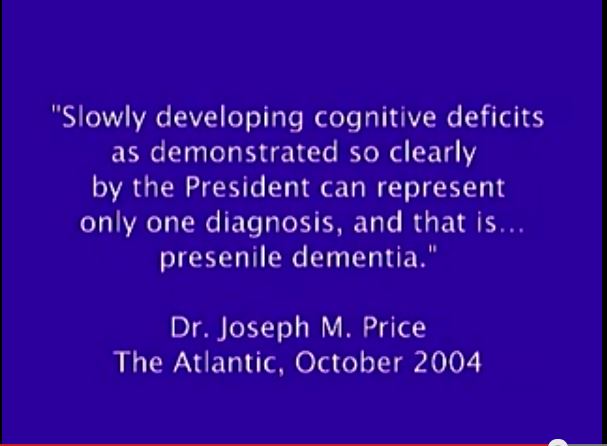 I wonder if Dr. Joseph M. Price, tele-diagnostician and on-line swami delux, still has a license to practice medicine.

I certainly hope his peers have acted to save their professional standing.

I was subscribed to The Atlantic at that time (no longer). There were multiple weeks of letters to the editor where this was discussed.
Unprofessional, as you mention, and in my view shockingly poor judgment on the part of the editor.

I read the headline and thought this was a trailer for an upcoming science fiction movie. I’m disappointed.

This whole affair was blown out of proportion by the headline writers at the Post. It happens in the MSM but also on some of my favorite blogs. I thank these bloggers for pointing out interesting articles and videos but wished that the let me make my mind up as to what that article means.

I am not speaking to your, Professor, but wish that some blogger would tone down their overheated headlines!

Sent this one to MYSTERY SCIENCE THEATER. Crow T Robot, Tom Servo and Gypsy will have fun with this one: “The Attack of the Brain Trusters”

There have been people with experience and sources in political circles who swear Hillary will not run because she is very ill.

Sin-sickness is described by G-D in Proverbs and the Prophets as drunkenness and delusions. Anyone who loves abortion and power as much as Hillary is certainly sin-sick.

Remember these coincidental events during the early days of the Benghazi investigation?

“The mysterious blood clot, which allowed a lengthy delay, a very lengthy delay, before eventually testifying “what difference does it make”? The mysterious fire directly above Hillary Clinton’s DC State Dept. office during the Thanksgiving holiday immediately after 9/11/12. The mysterious break-in’s at the law office of State Department whistleblowers where the only thing stolen are computers and files. Individually it all seems disconnected, but put it together and you have to ask is this too part of the ‘Control of the narrative” (The Last Refuge)

This all fits the classic Hillary/Bill Clinton MO. There is a longterm pattern that is indicative of psychological and moral sickness…perhaps now the prior illnesses have birthed physical consequences or symptoms.

Is that the same Dr. Joseph M. Price who says that coronary artery disease is caused by chlorine in the water supply?

And Jimmy Carter never said “malaise”. We all know what Rove was doing and what he meant. Rove requires no defense from the rest of us; we should simply take note of his conscious decision to draw attention to this and wonder why.

Because, by design, we have no idea of the truth.

***required six months of very serious work to get over,” he said.***

“It’s something she never low-balled with the American people, never tried to pretend it didn’t happen.”
—Bill Clinton

I think Ol’ Walleyes bamaged her drain pretty seriously. (Why do you think I call her Ol’ Walleyes?)

Even Carl Rove has the right to be quoted accurately.

Well, yes, and also to be properly identified too! Ah, yes, of course, sometime a mistake is just a mistake, yet it can still be considered a mere mistake, as the above comment shall be.

You, know, we even n our early dotage can have fun and find humor in many events. Yet, not in a the third coming of the Clintons.

The hypocrisy of the prog drones is nothing if not mind-numbing. When it was Bob Dole or John McCain as the GOP presidential candidate, their age and mental condition was fair game. Reagan’s mental condition was skewered long before he left office and developed actual problems. Hell, let’s go ahead and throw Hairy Reed’s slandering of Mitt Romney’s tax returns into the mix…. the Dim progs have no problem trashing their opponents, but when it’s done to them the call the Journolist punks to circle the wagons. You know what? Fuck you, you Dim progs. You’re a bunch of lying, hypocritical jerk-offs. Please excuse my French, I’ve had a long week and it’s only Wednesday.

I despise Rove, and wish Fox would take him off their airwaves.

That said, what he said is not unfair, or untrue. And, given Slick Willy’s comments (quoted above – thanks, @Rags), it was indeed a severe injury.

I have said for a while, since her supposed “blood clot” that I thought it was more; mere speculation on my part. However, it seems the press “doth protest too much.”

Carter’s mental state was questioned after reporting a UFO. Prior to his election, Reagan’s age and health were a constant subject among his opposition, as it was only less so for GOP candidate Bob Dole (war injuries) and John McCain (PTSD from Hanoi Hilton). During the run for president in 1968, GOP primary candidate George Romney (Mitt’s father) sank like a stone after he said he’d been “brainwashed” by U.S. military and diplomatic officials in Vietnam.

Health concerns are automatic for any candidate for the presidency, which is why candidates routinely release their medical records.