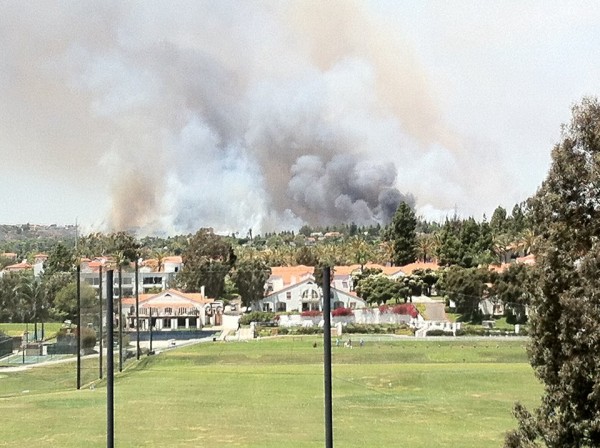 With a little help from cooler temperatures, atmospheric moisture, and robust emergency response, San Diego’s recent wildfires are well contained and a return to normal life is resuming for San Diego Residents…almost.

As we reported earlier, evacuations have been lifted for residents of Camp Pendleton military base in San Diego, though some marines have been relocated to barracks away from the fires. Lt. Ryan Finnegan told KPCC that outlook is “trending positive,” with all three fires on base over 50 percent contained.

“I wouldn’t say it’s quite back to normal,” Finnegan said. “We definitely still have some road closures and power outages here on base, but all the families are back in their housing. The people who are displaced right now are the single marines who live in the barracks.”

Those marines have been moved further south to temporary housing.

Last week, I mentioned there were serious speculation that arson may be the cause for several of these blazes.

An arrest was made in connection to one of those fires.

Authorities arrested a man for arson Friday in one of 10 fires that raged through San Diego County this week, as U.S. Marines and their families were forced to flee Camp Pendleton due to a new fire on the base.

Alberto Serrato, 57, pleaded not guilty Friday to arson in connection with a 105-acre fire in suburban Oceanside — one of the smaller fires. The fire started Wednesday and is fully contained. Serrato was arrested Thursday in Oceanside and faces up to seven years in prison if convicted.

Tanya Sierra, a spokeswoman for the San Diego County district attorney’s office, says witnesses saw Serrato adding brush to the flames near homes but he was not seen starting the fire. The spokeswoman says he has not been connected to any other fire.

Oceanside Police are hot on the trail of another suspect in two more of the wildfires.

Meanwhile, the Oceanside Police Department may have a lead in its investigation. A spokesman told NBC7 that last Thursday, a teenager was spotted setting brush on fire in the 600 block of Boysenberry Street.

While that was separate from the San Luis Rey Rivebed Fire, he is a person of interest in connection with both incidents. He is not in custody.

Based on concerns, a multi-agency arson task force has been established to spearhead the investigation.

Investigators with multiple federal, state and local law enforcement agencies — a who’s who of fire detectives — are investigating the start of at least 16 separate fires in the county last week, from the big ones like Poinsettia and Cocos to tiny spot fires that may be suspicious and possibly connected.

A Joint Arson Task Force Information Exchange has been created as a clearinghouse for all information, a way for all the investigators to share details of what they are finding to see if there is any commonality, said Chet Bertell, a city of San Diego firefighter and certified bomb technician.

No matter the cause of the numerous fires, the resilience of the American people shines through as many are already making plans to rebuild. Interestingly, one of the first things city officials are doing to expedite the process is removing the flaming hoops of regulation.

Some Carlsbad residents who lost homes in last week’s wildfires are making plans to rebuild while two businesses displaced by the fires are moving to temporary homes.

City officials are hoping to expedite the rebuilding process for wildfire victims by having already-approved plans of the buildings that burned ready and waiting for residents, said Glen Van Peski, director of community and economic development for Carlsbad.

Between the rebuilding and the investigations, I strongly suspect California’s many agencies are also preparing for a very busy fire season this year.

Another waste of funds: Governor Moonbean already declared that the fires are a result of climate change.

No one to blame? Surely the fire was caused by some liberal? They went out there and deliberately started the fire because they are against our single-family way of life (“a gun in every den”) and want us all to live in high-rise collective chicken coops. Right?

Where’s your sense of anger?