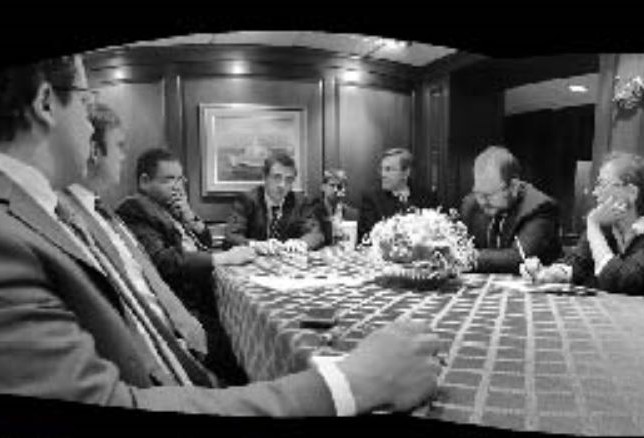 Hey, remember Journo-list? The Ezra Klein organized brigade of lefty bloggers and “journalists” who coordinated messaging in the 2008 campaign for Obama. Many of whom later were rewarded with perks such as meetings at the White House?

They have received promotions, and now are embedded in the mainstream and well-funded new media.

But Journo-lists don’t change their spots (or is it stripes?).

They are bigger than ever, are more numerous, and still are running interference for Obama, as detailed at National Journal by James Oliphant, Progressive Bloggers Are Doing the White House’s Job:

When Jay Carney was grilled at length by Jonathan Karl of ABC News over an email outlining administration talking points in the wake of the 2012 Benghazi attack, it was not, by the reckoning of many observers, the White House press secretary’s finest hour. Carney was alternately defensive and dismissive, arguably fueling a bonfire he was trying to tamp down.

But Carney needn’t have worried. He had plenty of backup.

He had The New Republic‘s Brian Beutler dismissing Benghazi as “nonsense.” He had Slate‘s David Weigel, along with The Washington Post’s Plum Line blog, debunking any claim that the new email was a “smoking gun.” Media Matters for America labeled Benghazi a “hoax.” Salon wrote that the GOP had a “demented Benghazi disease.” Daily Kos featured the headline: “Here’s Why the GOP Is Fired Up About Benghazi—and Here’s Why They’re Wrong.” The Huffington Post offered “Three Reasons Why Reviving Benghazi Is Stupid—for the GOP.”

It’s been a familiar pattern since President Obama took office in 2009: When critics attack, the White House can count on a posse of progressive writers to ride to its rescue. Pick an issue, from the Affordable Care Act to Ukraine to the economy to controversies involving the Internal Revenue Service and Benghazi, and you’ll find the same voices again and again, on the Web and on Twitter, giving the president cover while savaging the opposition. And typically doing it with sharper tongues and tighter arguments than the White House itself.

Ron Fornier of National Journal predicted mocking and whining, which is what Journo-lists do best:

The Kool-aid crowd can dish it out. Stand by for mocking & whining, @jamesoliphant, because they can’t take it: http://t.co/MnUrlKLxL1

We were not disappointed:

Story doesn’t come close to identifying the key distinction, which is between legitimate liberal arguments and partisan water-carrying.

The name-calling in place of argument by @ron_fournier underscores the analytic problem in the story https://t.co/YnxHBzKagH

Far from doing White House’s job, I’m doing my own @jamesoliphant, but thanks for thinking of me! http://t.co/bNUsO5atb7 via @Salon

Super-dopey hack gets journalism wrong: A response to James Oliphant http://t.co/bNUsO5atb7 via @Salon

I commend the bold “former liberal blogger” who, behind the veil of anonymity, took shots at reporters for not speaking truth to power.

Congratulations to those whose tireless water-carrying has at last been properly recognized! http://t.co/LKD8ObbRqV #PalaceGuard #Fealty

It’s a lot of fun to watch, but is the criticism really fair?

At least as fair as they are to Republicans.

“But Journo-lists don’t change their spots (or is it stripes?).”

Oh, and stink. They don’t change their stink.

But you have to go to the NYT today for really, deeply unhinged hate, lies and rah-rah for more lawlessness by the Obami.

Sychophants of Slobbering Journalism do this because this is their job security in an Obama economy – plenty of BS but nowhere near enough jobs.

Journ-o-list was formed for a bit more sinister purpose than “messaging” for Obama. These were putative independent news reporters and analysts who held themselves out as objective, but secretly coordinated their approach to news stories so as to “explain” them in the most favorable light possible for Obama and the leftist ideology. They didn’t want plain, unadorned factual reporting out there because the public might not read the “right” message from naked truth.

Friends, that is propaganda by definition. Klein deserves to be treated in the same class as Josef Goebbels, their goal is identical: to ensure all news bends to the meme, that it all favors The Boss, and that any dissent is labeled as aberration. Klein hasn’t dispatched any dissenters to concentration camps yet, but that wasn’t Goebbels’ role, either.

Klein recently tacitly admitted that the “journolist” never really went away once it was exposed, so it has continued throughout the Obama regime – even though the members were embarrassed that their scheme had been revealed, it didn’t stop them. Propaganda never sleeps, there is always truth to be crushed, I mean, “explained.”

And what is the stated purpose of the current Klein-Yglesias venture, Vox? To “explain” the news! Using new graphic tools, animations, and videos!

Just as Leni Riefenstahl used the young technology of filmed documentary to promote the regime.

We need to stop being silent about these things.

The peculiar development, and one apparently not predicted by the classic writers on the problems of government and liberty, was that a nominally “free” press would willingly, even enthusiastically, abandon its “free” status and shackle itself to the State. It has always been important that the press be “free”, that is, independent of government. It has never been important that it be particularly good (fortunately), but it must be independent to be of value.

Goebbels was a propagandist, and he made no secret of it – the sign on his office even said Reichsministerium für Volksaufklärung und Propaganda. He was a government employee, and could reasonably be expected to serve the government. But the press is not a government agency. Its rush to abandon its own freedom has been traitorous; by abandoning its own freedom, it has imperiled ours.

All of which leads to the logical conclusion that the odious Joseph Goebbels was a veritable Boy Scout compared to the treacherous Ezra Klein.

What a concept! I’ve been waiting patiently to hear one for years. But I’m afraid it’s an oxymoron.

Whores by any other name….

Are they angling for their very own Walter Duranty prize?

Imagine the joy of Christians were the second coming to occur. This is how the leftist media regarded the arrival of The Lightbringer, who hath calmed the waters and healed our planet. Anything done for Him is by definition holy and right; anyone who doth protest it is by definition unholy and wrong.

Meh. I’ve been called a LOT worse than “unholy”.

Boy. Have I ever…

Has anyone ever called in a priest to splash holy water in your face? I had that happen once. Embarrassing.

Yeah, but he was defrocked and only had single malt scotch.

Don’t matter .It is out now in the global arena ,both the issue ( which is accepted as an AQ/ similar planned attack ) and rhe short & long term actions of the Obama admin. Their whining is just the buzz in the audience before a concert performance . I predict , if Trey has got that ringmaster touch , that this is going to be major international coverage.

If you. look back , notice that Obama got no support internationally either in the UN with his ‘ The future does not belong to those who slander the prophet’ or any time . No one but no one calls Mohammed ‘The Prophet’ unless they are heavy muslim . It is much more likely to be the / poem creed / script. hanging on a wall by Khahil Somebody .

But we will enjoy the spectacle of a stream of bureaucrats &. defence lackeys being paraded & hopefully humiliated .. But for us the bigger issue is WTH where these US guys doing in Benghazi ? We won’t be believing anything until that is addressed. We don’t just accept unconditionally that the CIA / subversive agents are the world’s police & fully expect th em to be in Ukraine for example causing trouble.

So on with the show .

Okay, something’s wrong with me lately. I keep misreading headlines in the most juvenile way. For instance, I thought this article was titled, “All the President’s Boogers”.

I read it that way too.

Or maybe the explanation is more prosaic – just the weird typeface this WordPress thing uses.