You say NCAA, she said NAACP

You say NCAA, she said NAACP 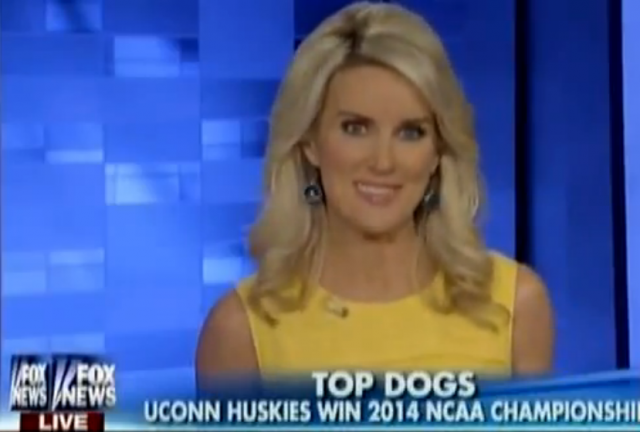 Oh, they thought they had Fox News right where they wanted it.  The proof they’d been waiting for that Fox News was racist.

Heather Childers on Fox & Friends First mistakenly referred to U. Conn. as the NAACP champs rather than NCAA champs.

There was pure joy in Mudville.  As of this writing, this TPM video has over 800,000 views:

The Raw Story headlined it as “A Freudian Slip?” (emphasis in original):

The National Association for the Advancement of Colored People — or NAACP — is a civil rights organization focusing on equality for African-Americans and other minorities.

At least 10 of the 15 players on the winning UConn team were African-Americans.

Well, Fox News almost made it through this year’s NCAA basketball tournament without saying something sorta racist. This morning, Heather Childers of Fox & Friends First introduced highlights of the University of Connecticut’s men’s basketball championship victory by calling them the “NAACP national champs.”

But given Fox News’ rather, ah, right-of-center stance on social issues — and the fact that 11 of the 15 players on UConn’s roster are African American — the verbal stumble sounded more like a Freudian slip to many.

This story gets better, too. As Mother Jones points out, Saturday Night Live came freakishly close to predicting Childer’s gaffe in its most recent episode.

“It’s tough to sign up for things, I’ve tried for years to join the NAACP,” actor Bobby Moynihan says while portraying a Fox & Friends host.

“Brian, why would you do that?” actress Vanessa Bayer asks.

Art, life and imitation — just more proof that it’s harder than ever to tell where one ends and the other begins.

A while back, after a particularly egregious mistake arose on the Fox News morning program “Fox & Friends,” this blog called for the network to pull the plug on the show, which consistently produces the most embarrassing content in the embarrassing category of cable news. Today, a morning show on Fox News added another really dumb mistake to the pile. This show is not “Fox & Friends”; it’s “Fox & Friends First,” which airs really early (5 a.m. EST). Slightly different name, same stupid result: “Fox & Friends First” host Heather Childers today said that the Connecticut Huskies had become “NAACP national champs,” in which case they would have done something phenomenal to rid the world of race-based discrimination. As opposed to, say, “NCAA national champs,” which would indicate that they won the basketball game last night.

You know, because only supposedly racist Fox News could make such a mistake on live TV.

In this space, we’ve been known to criticize Fox News. On Tuesday, for instance, when we participated in something of a pile-on vis-a-vis Fox’s Heather Childers. On the early-morning show “Fox & Friends First,” she confused the NCAA with the NAACP in delivering the news that the University of Connecticut’s men’s basketball team had won the national collegiate championship. “Stupid” mistake, we determined.

Well, not that stupid. As the post didn’t note, other media folks have made the same goof. We judged too harshly, and our apologies go to Childers and to Fox News.

The others? No apologies needed, apparently.

Did you hear about the blonde who saw a sign for the YMCA and said, “Look — they spelled MACY’s backwards!”

Hadn’t heard about this – but glad that the WaPo at least apologized.

And thanks for the Fred and Ginger video link. Love them – and Gershwin’s song. 😀

Shouldn’t the team racial/ethnic/gender/gender-orientation look like America? How many Asians on the team?

It is amazing that, in our society, affirmative action is OK for medical schools and law schools but sports teams are too important to base selection on anything except ability.

Kudos to Wemple and WaPo for apologizing.

Now, if WaPo and its reporters on the Koch/Keystone phony story will just answer the simple question posed by Power Line’s John Hinderaker: Was the reporting and/or timing of this story coordinated in any way with Henry Waxman and Sheldon Whitehouse, who sent the Kochs a letter demanding all sorts of information based on the story?

Waxman and Whitehouse won’t answer either. I would think that if the insinuation was untrue, it would be simple enough to just deny it.

I’ve done the same thing at least a dozen times (I teach political science, so frequently have the occasion to say NAACP). This isn’t a “Freudian” slip, it’s just a slip. It comes from the fact that the NACCP is called the “N-Double-A-C-P” while the NCAA is called the “N-C-Double-A.” These mental misfires happen all the time to everyone. Trying to make something out of it is just pure partisan politics. D.GOOCH

I don’t know how many times I’ve done this.

There is a media cottage industry that depends in part on promoting hatred for Fox News. I’m not sure when it started, but my guess is that it may have started with ideologically driven political blogs like Daily Kos very early in GWB’s first term. Then Keith Ogremann and MSNBC realized they could turn promoting Fox hatred and cultivating Fox Derangement Syndrome into a serious, long-term business strategy. Ogremann was making about $7 million a year for his Fox hating schtick when he got fired. Jon Stewart realized pretty early that he could profit from it, too. He makes even more than Ogremann did. Then Steven Colbert jumped from Jon Stewart’s show to create a new show on Comedy Central dedicated exclusively to mocking Bill O’Reilly (Stewart has a financial stake in “The Colbert Report” as “creator” and executive producer, so Fox hatred has been very, very good to Jon Stewart). Now Colbert has been so successful with his mock O’Reilly character that he’s gong to replace Letterman on network TV. Fox Derangement Syndrome is big business.

I’ve never listened to left leaning talk radio a day in my life – why would I? – but I assume there is a similar dynamic there. Finally, the rest of the left leaning political blogs know that after a decade of promoting Fox hatred and infecting their audience with Fox Derangement Syndrome, ANY story associated with Fox is excellent click bait and a way to drive traffic. TPM, Raw Story, Think Progress, Mother Jones, Gawker, Mediaite, and others know that promoting Fox Derangement is great for business. And posting a blog post of a 30 second video clip of someone from Fox saying something that can intentionally be misconstrued as offensive or racist or whatever is content gold. It costs the Fox hating industry next to nothing to produce the clip – they’re stealing it from content produced by Fox – and it drives traffic to the Fox hating site. People infected with Fox Derangement Syndrome are like addicts who need a new fix ever so often. And providing that fix is terrific for the Fox hating media industry.

I don’t think Fox News and Roger Ailes mind very much either. The more the lunatics rave about Fox, the more likely it is that people who aren’t familiar with Fox will tune in and see what all the fuss is about. The loyal Fox viewers will remain loyal no matter what – Fox has been #1 for over a decade – so the raging lunatics are essentially providing free advertising for Fox News. Because Fox viewers are loyal, the lunatics can’t hurt Fox but the “free advertising” can potentially draw new viewers to the channel. I doubt the upside is very much, but neither is the downside.

So Fox actually has a symbiotic relationship with it’s haters. Everybody wins from the left promoting Fox Derangement Syndrome.