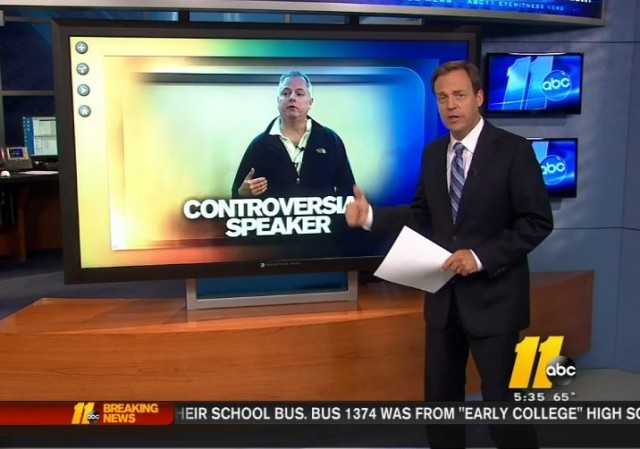 The Coalition to Stop Gun Violence is among the most aggressive groups in seeking to limit, if not eliminate, the 2nd Amendment right to keep and bear Arms.

CSGV also attacks so-called Stand Your Ground laws through misleading accounts of what happened in the Trayvon Martin shooting by George Zimmerman.  This CSGV video released about a month after the Not Guilty verdict, received a lot of attention:

The video was highly misleading as it related to the actual facts of the case.  One of the harshest critics was Andrew Branca, a contributor at Legal Insurrection and author of The Law of Self Defense.

The video is highly deceptive, and nothing more than a continuation of the propaganda campaign about the case.

Had they felt any affinity for the truth, they might have mentioned Martin’s emerging from the darkness to fell Zimmerman with a blow the neighborhood watch volunteer never saw coming, a blow that hit with such force that it broke Zimmerman’s nose, and which he described to police that same night as feeling as if he had been hit by a brick.

Had they felt any affinity for the truth, they might have mentioned Zimmerman’s many and numerous injuries about the head and face, especially those caused by Martin striking Zimmerman’s head on a cement sidewalk, with any single blow capable of being the one that turned Zimmerman into a drooling vegetable or simply taking his life.

Had they felt any affinity for the truth, they might have mentioned Martin’s long record of school violence, his engagement in street fighting, his apparent drug use, his apparent gun dealing, and his self-expressed desire to beat his victims until they had suffered “enough”.

Had they felt any affinity for the truth, they might have mentioned Zimmerman’s long history of affectionate and communal relationship with black neighbors throughout his life, from his childhood to the present day, or indeed Zimmerman’s own mixed-race background.

The Coalition to Stop Gun Violence tried for decades, under various guises and name changes, to seize the guns of law-abiding citizens. They failed. They tried to limit the right of the citizenry to carry arms for personal protection, they failed.

By demanding a legal duty to retreat from a felonious attacker they weaken the position of the law-abiding armed citizen who sought no fight and strengthen the hand of the felony criminal who possessed all the power to choose when, where, and how to launch his vicious attack, robbery, or rape of his intended victim.

Here is a screenshot from the video, purporting to show that the law should protect victims. 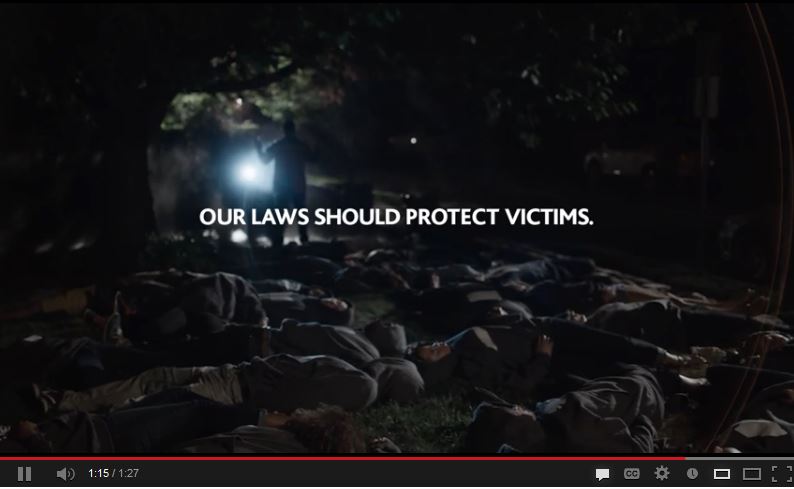 In fact, the law does protect victims. Victims like George Zimmerman, who didn’t have to suffer brain injury or death before he could defend himself with deadly force.

Branca’s coverage of the Zimmerman trial has led to numerous media appearances, including a lengthy interview on German television.

CSGV apparently feels that Branca’s views on the Zimmerman case should not be heard on law school campuses.  CSGV has gone through Branca’s Twitter feed to find tweets CSGV characterizes as celebrating Martin’s death.  Accordingly, CSGV has started urging others not to provide Branca “a platform”: 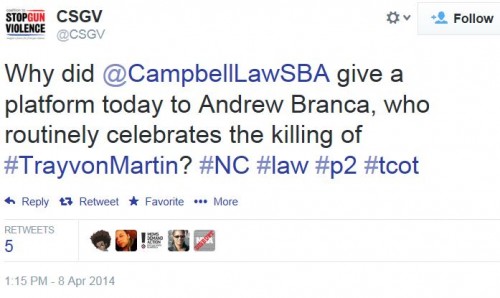 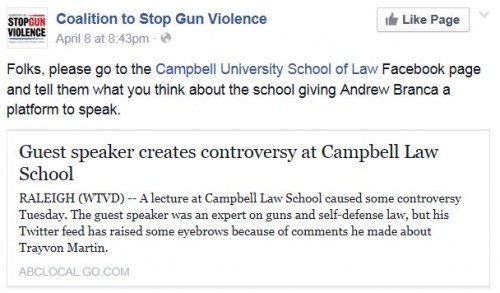 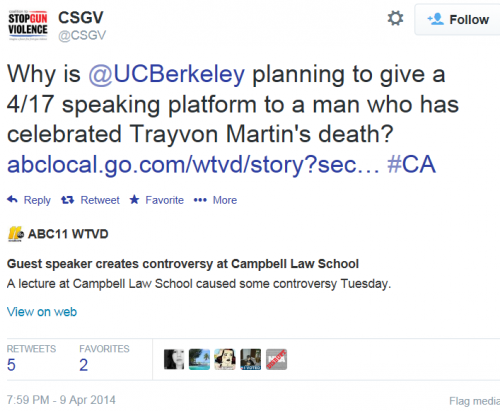 I don’t think CSGV’s characterization of Branca celebrating Martin’s death is fair.  Branca certainly is blunt (to put it mildly) on Twitter, but he’s celebrating the fact that we have self-defense laws, including Stand Your Ground, which allow people who are being beaten to a bloody pulp to use deadly force in self-defense.

But let’s say, for argument sake only, that CSGV’s characterization were accurate.  Does that mean Branca should be banned from campuses?  Do we have so little faith in law students, and the professors who invite Branca, that we cannot allow his opinions and analyses to be heard?  Is that where gun control advocacy has led us, that we must shut down opposing speech in order for gun control ideas to prevail?

How about questioning Branca about the tweets, confronting him with alternative views, and seeking a better understanding of the self-defense issues? That what the reporter did in the video below.  Kudos also to the law professor for defending the invitation:

“Our students learn best when they are presented with point, counterpoint, pros and cons on various issues, so we don’t shy away from having controversial speakers here at Campbell.”

On April 9, after I saw CSGV’s tweet regarding Campbell, I emailed CSGV’s communications director, as follows:

I’m writing about the appearance of Andrew Branca, who is a contributor at our website, at Campbell University Law School.

Specifically, CSGV tweeted out an objection to the law school giving Branca “a platform.”

Is it CSGV’s position that Branca should not be permitted to speak at public forums?

Please clarify CSGV’s position as soon as possible as I’m writing about this now.

I have not heard back, and since then, CSGV has added its objection to the Berkeley appearance.

We often hear it argued that diminution of 2nd Amendment rights is just the start, that what they really want is to suppress not just the right to keep and bear Arms, but also your political and other speech.

CSGV has offered us proof that those concerns are real, that they will not stop with your guns but also will come after your speech.

now we know who MR Branca was stalking 🙂
all joking aside, these idiots are dangerous.

Campbell University is in Buies Creek, NC, near the Cape Fear River, about 20 miles south of the state capital Raleigh, which is a modern small city still with southern charm. However, the rural areas around Buies Creek and rural NC areas in general are as strongly 2A as it gets, and CSGV would be wise to stick to twitter and other online venues because making anti-gun noise on the ground and in person here would not be welcomed. Frankly, they’d get run out on a rail. Tar and feathers stuff.

Fascists and Leftists have always besmirched, distorted and outright destroyed the truth in pursuit of ultimate goals, whatever they are.

These are the people who invented the concept of, The End justifies the Means.

Remember, a Progressive is just a well-dressed Marxist, who has a strong opinion about, and a plan to control, some or all aspects of your life.

I’ve always thought a “Progressive” was a Marxist with a shave.

The Left seems incapable of escaping their heritage and legacy. The Second Amendment was included in response to aristocrats and their minions depriving the common people of an equal right to armed defense and a government, when unchecked, abusing the human rights of its constituents.

That said, with the normalization of murder/abortion, there is virtually no “legal” limit to the government’s abusive behavior. While it was members of the Right which introduced this human rights violation into law, it was the Left, including the mainstream Democrat Party, which forced its acceptance as a normal and even functional behavior.

“Introduced” is too strong a descriptor. They actually affirmed murder/abortion, similar to the affirmation of Obamacare.

Still, the leading cause of childhood deaths is murder/abortion, which is typically carried out with a scalpel or lethal injection. A human rights violation which is wholly preventable, and, short of forced normalization efforts (e.g. pro-choice), is an aberration in a healthy population.

I wonder how well-meaning, even self-described “decent” people, could support this unprecedented violation of human rights. Do they take comfort in the myth of spontaneous conception? Do they place their faith in politicians, judges, and experts who deny the evolution of human life from conception to death?

Want proof they won’t stop with your guns reducing every issue to abortion? Here it is

maybe you need it. what trimester are you in?

The Right introduced abortion? Possibly I misunderstand but if that is what you mean, then please provide some details.

is to say “If guns kill people, do pencils misspell words?”

Yep, and Forks, spoons, and knives cause obesity.

I thought that was Ronald McDonald force feeding people.

CSGV is a socialist group of political activists in support of the Socialist Agenda and nothing more.

I checked their Twitter account and found I had previously blocked them. I do that only when harassed by a given troll.

I wont engage them one on one… rather, I take them on obliquely to avoid Twitter Gulag.

That ABC supports them and their assertions tells you something about the mindset at ABC.

They fight an uphill battle in spite of reality. That they never give up tells us this fight will continue to be waged past our lifetimes.

Actually, CSVG’s attention on Branco is a supreme compliment. They consider him a real threat to the Socialist Agenda.

Congratulations, Andrew! I cannot think of a better spokesman for rationality and the Second Amendment to be in the spotlight!

If anyone was paying attention to the “journalist” in the studio he referred to the “murder of Trayvon Martin”, which is both legally and ethically factual.

To Andrew I say keep it up my friend, if they are attacking you that means you are getting to them.

Sorry I meant to say that the “murder of Travon Martin”, which is both legally and ethically NON-factual.

I hate it when that happens. All comment systems ought to have an “edit” function…

Errr … this system does have an edit function which is live for a bit after you post — and there is a preview setting. (Just house keeping here , ; – ) )

OK, so in hitting reply I just thumbs down-ed my comment.

Correction: The edit function here is only available when you preview your comment. Sorry.

All violence has negative effects in families and communities.

Then, why pick on gun violence only?
Why aren’t they advocating against all kinds of violence?

Because they are not against violence. They are against guns. Period.
Just a bunch of hypocrites.

Now, let’s give them some slack.
Let’s assume that their “thing” is genuine. Let’s assume they really want to reduce/stop violence, then:

-Why on earth are they so shy when it comes to stopping people who commit those crimes?
-Why don’t they reach into those communities to educate and demand that they break the silence?
-What have they done for the innocent victims, including children, of drive-by shootings committed with illegal guns?
-Why aren’t they educating other young imbeciles like Trayvon Martin so that they don’t attack other people? What the heck! Why don’t they teach them to stay in school ?!!!?

Prof. Jacobsen — I am so grateful for this blog and the time you spend trying to educate us, the legal less-than-literate (but no longer illiterate 😉 )

It was because of your featuring Andrew Branca’s excellent and thorough coverage of the Zimmerman trial that I can interact more intelligently about the issues (sorry, [children], it was not “stand your ground”). The people with the strongest take on Zimmerman’s [obvious!] guilt and “what really happened” never watched or read the testimony. Amazing.

I would suspect that people who are not willing to LISTEN to another perspective have never listened to what the other perspective is, and can not articulate it. So? Demolish it if it without merit. But that is certainly different than name calling.

Put it all out on the table in the sunlight and let’s look at it. The people unwilling to do so do not belong in the university setting, that’s for sure.

Cheers for Branca, and thanks to you.