Ukraine takes control of airfield amid conflicts with pro-Russia separatists

Ukraine takes control of airfield amid conflicts with pro-Russia separatists 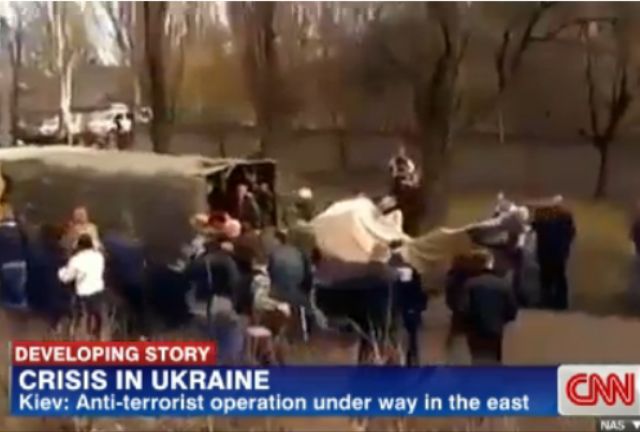 Ukraine’s government says it has secured a small airport in eastern Ukraine after reported clashes with pro-Russia separatists, though some of the details remain unclear.

From the Associated Press (via Boston Herald):

In the first Ukrainian military action against a pro-Russian uprising in the east, government forces said they repelled an attack Tuesday by about 30 gunmen at a small airport.

The clash came hours after Ukraine’s acting president, Oleksandr Turchynov, had announced an “anti-terrorist operation” against the armed, pro-Russian insurgents who had seized control of numerous buildings in at least nine cities in Ukraine’s restive east.

The central government has so far been unable to rein in the insurgents, who it says are being stirred up by paid operatives from Russia. The insurgents are demanding broader autonomy and closer ties with Russia, and, complicating the political landscape, many local security forces have switched to their side.

The clashes Tuesday came at Kramatorsk airport, just south of the city of Slovyansk, which is 160 kilometers (100 miles) from the Russian border. The city has come under the increasing control of the gunmen who seized it last weekend.

The precise sequence of events in Kramatorsk was mired in confusion amid contradictory official claims.

The BBC, which had a reporter in Kramatorsk, indicated that an angry crowd had gathered outside the airbase, while a group still remained later and chanted slogans in favor of referendum.

Reports of casualties were still unclear at the time of this writing, as the AP noted.

There were conflicting reports of casualties. Yury Zhadobin, coordinator of a pro-Russian defense force, said two people were slightly injured and were taken to a hospital. Russian media, without sourcing, claimed anywhere from four to 11 casualties at the airport. Ukraine’s government said there were no casualties and added that Ukrainian forces took an unspecified number of militiamen prisoner.

In an attempt to defuse the standoff, Gen. Krutov came out to speak to the crowd of people picketing the airport but was attacked by them.

While he spoke of repelling an attack, the new government in Kiev declared that its forces had recaptured the airport from militiamen.

Reuters also reports that the general received a hostile reception, and by evening had withdrawn into the air base with his men.

Tuesday’s actions follow the Ukraine government’s recent announcement that it would launch a “full-scale anti-terrorist operation” against separatists in eastern Ukraine.

Russia posted on President Vladimir Putin’s website Tuesday that Putin, in a telephone conversation with UN Secretary General Ban Ki-moon, condemned Kiev’s use of force.  “Mr Putin stressed that the Russian side expects the United Nations and the international community to clearly condemn these anti-constitutional actions,” the statement added.

Additional video report of the ongoing operations in eastern Ukraine below from CNN.

Gonna be a fun election in 6 weeks! What’s the bet they declare a State of Emergency & ‘postpone ‘?

In the last election before the coup, eastern Ukraine (and Crimea) voted for Yanukovych and his party by majorities ranging from 60 to 90 %. Since the east is only about 20% ethnic Russian, there must have been strong support for Yanukovych among the ethnic Ukrainian majority. Likewise, in the west, Yanukovych’s opponent got similar majorities.

Apparently, the divisions in Ukraine are extremely deep and transcend ethnic identity. The upcoming election will not resolve the divisions. Without the Crimea, the westerners might win the election, but it is doubtful the easterners will be happy about it, or even accept the result. Putin’s suggestion of a federal Ukraine actually makes sense in this situation and might allow the two parts of Ukraine to live together peacefully.

Meddling by EU/US leaders created this crisis. It is extremely disturbing to see our politicians, military leaders and so-called foreign policy experts work themselves up into a jingoistic, warmongering rage and reject out-of-hand any attempt to negotiate out of the crisis. We are very close to a large-scale European war.

Like the pro-democracy demonstrators in Egypt, the Ukrainians should get positive ID on some of this “pro-Russian separatists.” There is some evidence that there are not really a lot of people who are actually “pro-Russia” in Ukraine.

“As recent events have shown, Vladimir Putin views himself as a rebuilder of the USSR. According to his worldview, Vladimir The Restorer collects former Russian territories into a newly created Russian Union. But despite the recent show of strength from pro-Soviet protesters in Ukraine’s east, the Kremlin’s recent aggressions in Ukraine have actually united the country in its opposition to Putin and his worldview. “