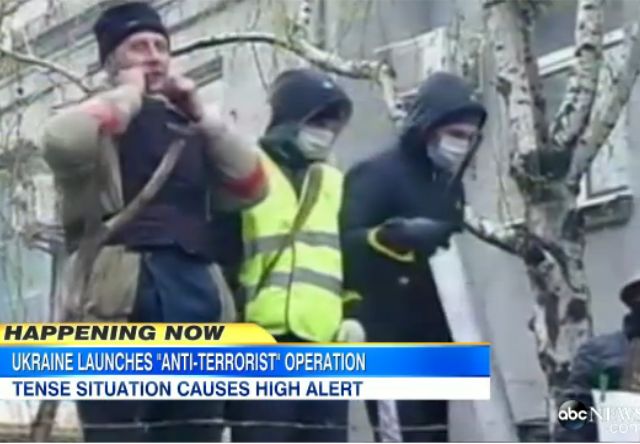 Amid escalating tensions in eastern Ukraine where pro-Russian separatists have seized buildings over the weekend, Ukraine’s acting president said the government would deploy troops to launch a “full-scale anti-terrorist operation.”

Ukraine has given pro-Russian separatists a Monday morning deadline to disarm or face a “full-scale anti-terrorist operation” by its armed forces, raising the risk of a military confrontation with Moscow.

Angered by the death of a state security officer and the wounding of two comrades near the flashpoint eastern city of Slaviansk, acting president Oleksander Turchinov gave rebels occupying state buildings until 0600 GMT to lay down their weapons.

“The National Security and Defense Council has decided to launch a full-scale anti-terrorist operation involving the armed forces of Ukraine,” Turchinov said in an address to the nation.

He blamed Russia, which annexed Ukraine’s Crimea region when Moscow-backed former president Viktor Yanukovich fled after months of pro-Western protests, for being behind the rash of rebellions across Russian-speaking towns in eastern Ukraine.

“We will not allow Russia to repeat the Crimean scenario in the eastern regions of Ukraine,” Turchinov said.

Russia’s foreign ministry called the planned military operation a “criminal order” and said the West should bring its allies in Ukraine’s government under control.

“It is now the West’s responsibility to prevent civil war in Ukraine,” the ministry said in a statement.

In the eastern Ukraine town of Mariupol, there were also reports that separatist protesters had seized control of city hall earlier Sunday, according to another Reuters report.

At Russia’s request, the United Nations Security Council has called an emergency meeting to be held on Sunday evening, according to the Associated Press (via ABC News).

The U.N. Security Council has called an emergency meeting at Russia’s request to discuss the growing crisis in Ukraine.

Russia’s U.N. mission sent a text message to reporters saying a closed meeting of the Security Council would begin at 8 p.m. Sunday (0000 GMT). The Russian mission said it had requested the meeting.

The President of the Security Council confirmed in an email that members have been invited to attend “informal consultations” on Ukraine Sunday evening.

Additional details in a video report below from CNN.

So without the Berkutt Kiev is having to send in its own army including ‘commandos’ ?.

Or is this propaganda ? Whilst the russians & Ukrainians understand propaganda I don’t think the west does & we atelikely to over react.

Also , GB Poland & someother nitwit nation which slips my memory is discussing sending in Police to restore order & give the Justice System a do – over. These people are insane .& will lead us to ear.

‘lead us to ‘ear’ . Meant to type ‘war’ but then again with Britain , . it is more likely to be ‘ somewhere over the rainbow’ .

What the hell. OBAMA IMPOSED SANCTIONS. This can’t happen!

Ukraine is safe for a few days.

Obama warned Putin not to act in eastern Ukraine.

It will take Vladimir at least a couple of days just to stop laughing.

Berkut, or whatever is left of it, switched over to the pro-Russian side. Actually, I’m not sure that can be considered a switch. So basically, of armed groups there are various pro-Russian militias (Russia claims that 1.5 million signed up, but I think they are seriously off), Pravy Sektor, which was kicked out of south-east last month and that talked about private army hired by the oligarchs. And, of course, the Russians are ready to attack. Lets see if Ukraine can hold on to Dnepropetrovsk.
…
Oh, and Biden is on the way to Kyiv. Help is coming.

Ukraine takes control of airfield amid conflicts with pro-Russia separatists | April 15, 2014 at 8:00 pm