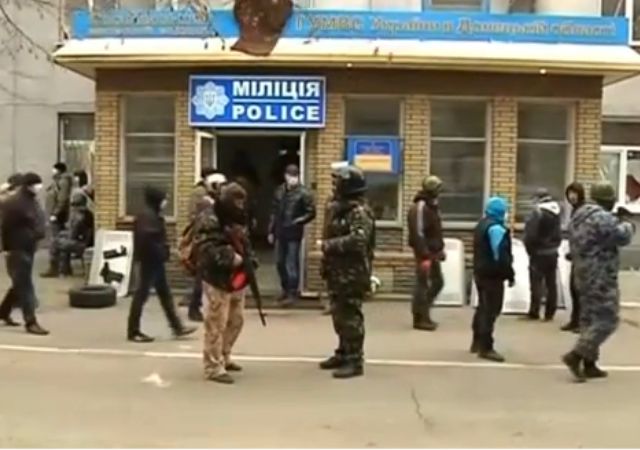 The crisis in Ukraine again further escalated this weekend after a group of armed men seized the police station and a security services headquarters in an eastern Ukrainian city.

Armed men seized official buildings in a city in eastern Ukraine on Saturday and hoisted the Russian flag, deepening a stand-off with Moscow which, Kiev warned, was dragging Europe into a “gas war” that could disrupt supplies across the continent.

At least 20 men armed with pistols and rifles took over the police station and a security services headquarters in Slaviansk, about 150 km (90 miles) from the border with Russia.

Officials said the men had seized hundreds of pistols from arsenals in the buildings. The militants replaced the Ukrainian flag on one of the buildings with the red, white and blue Russian flag.

On a road leading into Slaviansk, other members of the group, armed with automatic rifles, set up a roadblock and checked vehicles entering the city, a Reuters reporter said.

Ukraine is in the process of recapturing the buildings as of this writing, according to reports.

The Associated Press offered some additional details about the individuals involved in the incident.

In Slovyansk, about 20 men in balaclavas and armed with automatic rifles and pistols were guarding the entrance to the police station in the city of about 120,000 people, and another 20 were believed to be inside. They wore St. George’s ribbons, which have become a symbol of pro-Russian protesters in eastern Ukraine. The ribbons were originally associated with the Soviet Union’s victory in World War II.

A masked guard in Slovyansk, who gave his name only as Sergei, told The Associated Press they have “only one demand: a referendum and joining Russia.”

The man said they seized the building because they wanted to protect it from radical nationalists from western Ukraine and “the junta who seized power in Kiev.”

“We don’t want to be slaves of America and the West,” he said, speaking at the seized police station. “We want to live with Russia.”

A statement from the Ukrainian Interior Ministry said “The goal of the takeover was the guns,” according to the NY Times.

And in Donetsk, where another group occupied a police headquarters, the police chief told pro-Russia protesters he was stepping down to meet their demands, Reuters reported.

Kostyantyn Pozhydayev came out to speak to pro-Russian protesters at his offices in the regional capital, Donetsk, and told them he was stepping down “in accordance with your demands”. Some of his officers left the building.

The protesters occupied the ground floor of the Donetsk police headquarters and a black and orange flag adopted by pro-Russian separatists flew over the building in place of the Ukrainian flag, a Reuters reporter said.

The White House expressed concern about the incidents Saturday, and again pointed a finger at Russia for fomenting unrest.

“We are very concerned by the concerted campaign we see underway in eastern Ukraine today by pro-Russian separatists, apparently with support from Russia, who are inciting violence and sabotage and seeking to undermine and destabilize the Ukrainian state,” said National Security Council spokeswoman Laura Lucas Magnuson, in a statement Saturday.

U.S. State Department spokeswoman Jen Psaki, in a tweet, described the situation as “worrisome. “Russia again seems to be behind” the unrest, Psaki said Saturday.

The Associated Press reports that Slovyansk Mayor Nelya Shtepa claimed the protesters were not Russians, but local residents.

Meanwhile, Vice President Joe Biden will travel to Kiev to meet with government leaders and others on April 22nd.

Not long ago it was “America again seems to be behind” the unrest. When does a coup gain legitimacy?

Well, Obama has warned Putin not to do anything, so Ukraine will be safe for a couple of days.

It will take Vladimir that long to stop laughing.

Whatever happened to the 48 hour Ultimation from Kiev ? Nothing .

One of my first posts post Yankuvich agone , was what has happened to the Berkutt after the new Interior Minister dismissed them en masse. How in th absence of a trained force will the ensuing unrest be professionally controlled?

I notice several groups of Berkut outfitted men at some sites , particularly the smaller less publicised towns . It certainly looks to be an open declaration to Kiev.

It just adds to my impression that Those in Kiev are amateurs & worse , plain stupid . Who would throw their only trained security force away to the lions? Did they not think they need to eat & might not be feeling warm fuzzy feelings after being betrayed & humiliated?

Further Ukraine has not paid its latest gas installment , saying it has ‘suspended ‘ payments . This brings all of the SW customers ( who do pay. ) at risk . The last crises was Kiev ( Timochenko ) stealing gas .

In a civil war the east will have gas & industrial output .Kiev will be reliant on German industry which is dependent on Russian gas.

You could not make this up.