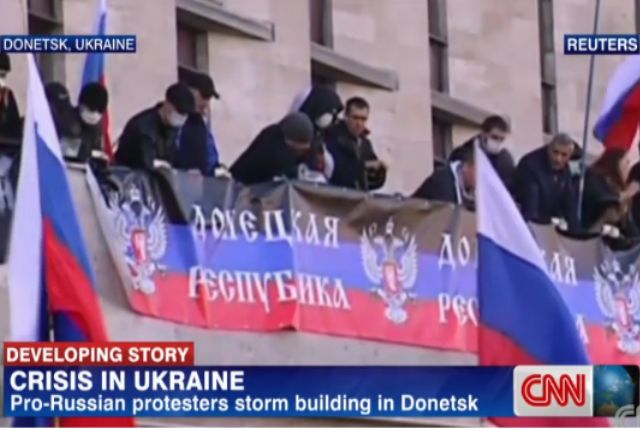 Ukraine warned on Wednesday that pro-Russia protesters have two days to vacate buildings they’ve occupied or they will face forced eviction.

Ukraine’s Interior Minister has warned separatists occupying state buildings in its eastern regions to leave within two days or face forced eviction, risking the anger of Moscow which has warned against any violence towards pro-Russian protesters.

Security forces have so far refrained from using force in the cities of Donetsk, Luhansk and Kharkiv, wary of warnings from Russia that military action remains on the table if ethnic Russians come under attack.

But the Interior Minister, Arsen Avakov, was clear that the occupations which began on Sunday would not be tolerated for much longer. “I want to repeat that there are two options: political settlement through negotiations and the use of force,” Mr Avakov told reporters. “We are ready for both options.”

The NY Times also reports that protesters were being pressured to stand down by other local political influences as well.

Facing threats of forcible eviction by the Ukrainian government, pro-Russian demonstrators who have seized the 11-story government headquarters in Donetsk, eastern Ukraine’s second-biggest city, suffered a further blow Wednesday when local political barons who share their deep dislike of Ukraine’s new government demanded that they give up and hand over any weapons.

The protesters, however, vowed to stand firm, fortifying barricades erected around the Donetsk regional administration building as a thinning crowd of several hundred supporters chanted “Russia, Russia” and cheered calls for President Vladimir V. Putin of Russia to protect them.

Protesters in Luhansk were also reportedly reinforcing barricades around the security services building they’d earlier seized, according to reports in The Guardian and Sky News (via Yahoo News).  However, it’s unclear from the timing of the various reports if this is still the case there, as the NY Times reported that the standoff there had ended peacefully “when several dozen people left the building of their own accord.”

Wednesday’s warning from Ukraine’s interim Interior Minister came just a day after Russia issued its own warning against use of force on the pro-Russia protesters.

Top diplomats from the European Union, Russia, Ukraine and the United States are expected to meet next week to discuss the Ukraine situation, according to Reuters.

Below is an earlier video report from CBS News.

The pro-Russian protestors should stage a counter-coup. That seems to be a legitimate form of political expression. A legitimacy which has been established and confirmed by the American administration and various European governments.

Actually, with the current American administration, there is little that could be considered illegitimate. I would suggest Russia follow the Libyan precedent, but I don’t think that Putin is so vulgar or aggressive. He seems to be comparatively moderate, especially in the wake of American abuses in Libya, Syria, etc., and now Ukraine.

Putin is playing an inside game we don’t see so much to go along with the outside game we do. He has to nurture the support of his own people in all this and from what I’ve read, he’s succeeding with it.

It seems that the administration is not only aggressive with Americans, but also with allies and partners alike, and neutral parties.

Russians and Russian interests face a real threat from America and Europe. I think the support of his people will be easily won. Especially if he continues to improve the economy and society to serve more Russians. It will be absolutely straightforward if Western interests threaten Russian self-determination inside Russia proper and annexed regions such as Crimea in Ukraine.

Putin is certainly more honest with his people than our administration is with us.

“I think the support of his people will be easily won. Especially if he continues to improve the economy and society to serve more Russians.”
Seriously? The more repressive his government, the more his people suffer, the more they love him. Russians are ready to suffer for Crimea, which they consider rightfully Russian.

whoah , what language is this that they speak? Do they know what a Baron is?

‘Warlord ‘ So they would have to downgrade Afghan & Somalian guys ?

Sheesh – they’ve been working hard at it for decades..

Putin is looking for a pretext to invade.

No one respects Obama anymore, and America’s influence is falling fast because of it. But it is outrageous for our media to allow Obama to scrub the fact that he was UN-invited to a scheduled private dinner with King Abdullah of Saudi Arabia: http://po.st/YDVbdI