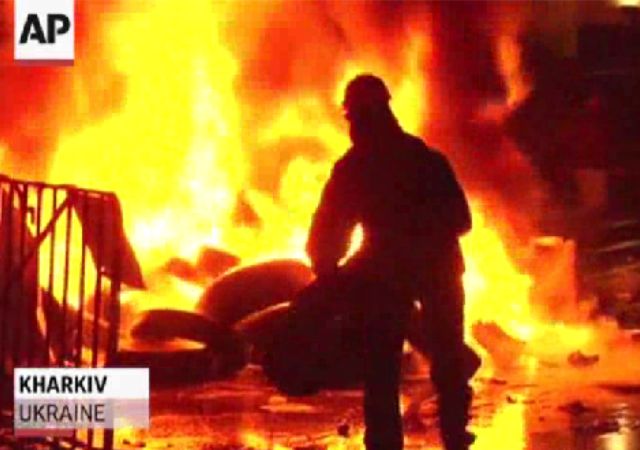 As Ukrainian authorities cracked down on pro-Russia protesters Tuesday after recent unrest that escalated over the weekend, Russia issued a warning against the use of force and also alleged that a private U.S. military contractor is assisting Ukraine.

Ukrainian riot police on Tuesday cleared a regional administration building and public square in the eastern city of Kharkiv of hundreds of pro-Russia protesters, detaining scores in the process, officials said.

In response, Russia’s Foreign Ministry issued a stern warning against the use of force on pro-Russia protesters in eastern Ukraine and alleged the direct involvement of private U.S. military experts.

“According to our information, Ukraine Interior Ministry and National Guard troops including militants of the illegal armed group the Right Sector are being brought to the southeast regions of Ukraine,” read a statement posted on the Russian Foreign Ministry’s official website Tuesday. “A special concern is connected with the fact that about 150 U.S. experts from the private military organization Greystone dressed in the uniforms of [Ukraine] special unit Sokol are involved in the operation.”

“The organizers and participants in the operation are assuming huge responsibility for the creation of threats to rights, freedoms and lives of peaceful residents of Ukraine,” the statement said.

Further, Russia warned that use of force in the attempts to quell the unrest “could lead to civil war,” according to CNN.

In response to Russia’s accusations of the involvement of Greystone, a representative from the company told the Wall Street Journal, “We do not have anyone working in Ukraine nor do we have any plans to deploy anyone to the region.”

Meanwhile, just as on Monday, Washington DC again warned of potential additional sanctions against Russia should its forces move into eastern Ukraine.

Secretary of State John Kerry said Tuesday that Russian forces and special agents have been behind what he called the “chaos” in eastern Ukraine in the past 24 hours. Kerry described the developments as “more than deeply disturbing” and said they amounted to what could be a “contrived pretext for military intervention just as we saw in Crimea.”

He followed up by warning of increased sanctions targeting Russia’s banking, energy, mining and arms sectors if the Russians “cross over” into eastern Ukraine. Current sanctions target individuals over the Crimean annexation.

And in a testy exchange during a Senate committee hearing Tuesday, Arizona Senator John McCain criticized Kerry on a series of foreign policy matters, including Ukraine. Via the Washington Free Beacon:

“On the major issues, this administration is failing very badly. On the issue of Ukraine, my hero, Teddy Roosevelt, used to say, talk softly but carry a big stick. What you’re doing is talking strongly and carrying a very small stick — in fact, a twig,” McCain [said to Kerry].

Watch the rest of the exchange below.

In the hurrumph afrer Yankuvich left. , the Interior minister triumphantly sacked the Berkut . Yatsenuk also threatened to ‘burn the earth ‘ under Russians in east Ukraine .

After beingpublicly scapegoated & humiliated by the government ( after being molotoved , cross- bowed & such by fellow Ukrainians , I doubt any remnant police would be very enthusiastic in being sent over to. the east . Who they are will be more discernable soon . Trained police keep to disciplined lines eg in Kiev by their actions.

I remember Britain supplying Benghazi (!?!) police with full uniform & equipment during the civil war as ‘non lethall aid’ . Thus In place of dispirited lowly paid Ukrainian bodies , Kiev would be more than happy to receive ‘help’.

I think East Ukraine is gone from Kiev’s clutches.

Russia sends in people to try and overthrow the government in Ukraine. Russia then warns Ukraine not to attempt to prevent a takeover or they’ll consider it an act of war. Kerry, always on the ball, suggests it “might” be contrived.

Is there anyone in this administration even remotely embarrassed or ashamed of the complete incompetence that rolls out of the WH and State on a daily basis?

Another factor is that Ukrainian nationals are massive operators as both mercenaries & smugglers .

African jails are regularly stocked with Ukrainians , everything from protectionrackets to diamond deals . Sometimes bad luck in being the security for deposed leades. Olegs Army as it were .

Odessa is a Smugglers paradise through the Ukrainian navy . it also has strong Israeli connections so you can add money & gemstone laundering ..

Hence it would be very easy to employ Ukrainian nationals for a private security firm acting for the Ukraine government.

Let’s remember, the “government” of the Ukraine is not the government that was elected by its people. So when US officials talk about preserving the sanctity of the Ukrainian government, it does not ring true.

Until the truth comes out (unlikely to happen) as to who exactly promoted the uprisings and supplied the force to take out the elected government, there is no moral high ground here.

It’s not a good feeling to have more faith in Putin than in certain US officials. But it’s a feeling that’s hard to shake.

Let’s remember, the “government” of the Ukraine is not the government that was elected by its people…there is no moral high ground here.

Your comment comes at the expense of ordinary Ukrainians who were often preyed upon by the popularly elected regime and kleptocracy of Viktor Yanukovych. If a thug with a criminal record resorts to death squads to quell an anti-government demonstration (a la Venezuela) qualify as “government”, then Obama’s popularly elected reign is a golden age by comparison.

That’s the thing about democracy, once leaders are elected, citizens has to accept them, even if the are horrible. Plus, in Ukraine Party of Regions doesn’t have a monopoly on corruption.
And, yes, they are jailing the opposition in south-east, turned off Russian TV and on track to ban political parties.

I’m not sure if anyone had seen this mythical private security force, but Pravy Sektor is alive and well. Pravy Sektor and Svoboda are running the Ukrainian version of defense department, for one. Most of them stayed in place in central and western parts of the country, however, harassing the locals and so on, but some are volunteering to go to south-east.
John McCain is the genius who flew in to Kyiv two months ago and took pictures next to the Nazi Svoboda clown Oleg Tyagnybok. Because this is what one does when tries to claim moral superiority.

No, citizens don’t have to accept elected governments. That’s why this one was impeached, legally.

And the East does not have to accept Kiev either .

I don’t believe the procedure prescribed in Ukrainian constitution was followed because they were a few votes short, and, in any event, the exact circumstance of that vote calls its validity in question. Rada members, including those from the Party of Regions who voted against Yanukovich, were scared for their lives.