We all paid for the roads Paul Krugman will drive on to his big pay day. 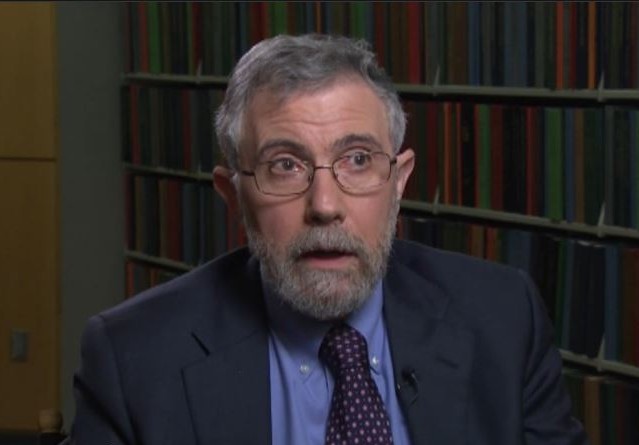 In late February, the City University of New York announced that it had tapped Princeton economist and New York Times blogger Paul Krugman for a distinguished professorship at CUNY’s Graduate Center and its Luxembourg Income Study Center, a research arm devoted to studying income patterns and their effect on inequality.

About that. According to a formal offer letter obtained under New York’s Freedom of Information Law, CUNY intends to pay Krugman $225,000, or $25,000 per month (over two semesters), to “play a modest role in our public events” and “contribute to the build-up” of a new “inequality initiative.” It is not clear, and neither CUNY nor Krugman was able to explain, what “contribute to the build-up” entails.

It’s certainly not teaching. “You will not be expected to teach or supervise students,” the letter informs Professor Krugman, who replies: “I admit that I had to read it several times to be clear … it’s remarkably generous.” (After his first year, Krugman will be required to host a single seminar.)

Hey, at least Elizabeth Warren actually had to work for her $350,000 a year at Harvard Law School.

But, that said, Krugman is worth every penny because of his unusual ability to predict the future: 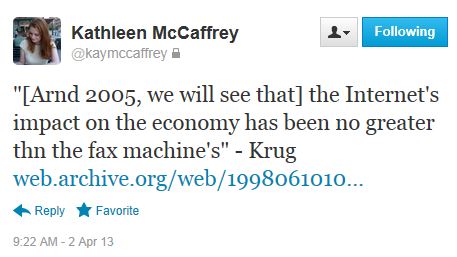 I seem to notice that in the pictures and screenshots of Elizabeth Warren posted here on legalinsurrection, there is always one innocent bystander in the background who is looking at Warren with their heads cocked quizzically. In my mind, they are saying to themselves, “I don’t know…she doesn’t look Cherokee to me.”

Really? That’s the best you’ve got?

The Krugman-supportive comments at Slate and Gawker just prove once again that the Left isn’t really against income inequality, but instead wants the power to choose who DESERVES it (for propagandizing the Party line in this case), in much the same way they’d like to determine who is allowed “free” speech depending on content.

Krugman (nee Keynes) is a perfect fit for NYC’s socialist Mayor de Blasio. Together, they can plan to redistribute someone else’s money, increase NYC’s debt leveraging, recite all manner of financial falderal and create an oligarchy utopia minus yo“u” (aka dystopia to “Joe” the plumber).

Yeah, NYC is falling apart. When is David Koch moving out?

David Koch has done more than you have ever done to help people.
Lulz.

[With other poor black seniors, watching Chance on TV]

Louise: It’s for sure a white man’s world in America. Look here: I raised that boy since he was the size of a piss-ant. And I’ll say right now, he never learned to read and write. No, sir. Had no brains at all. Was stuffed with rice pudding between th’ ears. Shortchanged by the Lord, and dumb as a jackass. Look at him now! Yes, sir, all you’ve gotta be is white in America, to get whatever you want. Gobbledy-gook!

I am sure Krugman would agree with Louise. Think about George W. Bush.

Think about Alan Greenspan. He was the ultimate hero of the Rand set until he exclaimed ‘Opps’. After 2008 he admitted he was wrong. Great timing.

Once is trolling, twice is obsession, three times is boredom.

I guess everyone here is trolling, obsessive and bored. It is always the same old song. Ever comment is a knee-jerk. Most lack wit and originality.

I think Ted Cruz is a perfect clone for McCarthy. But I don’t bring it up everytime his name comes up.

Warren is a Senator. The Indian jibes didn’t work. The only thing being discredited is the commenter.

Krugman, undoubtably, made some bad calls. But I would be proud to own his overall record. He sure got Bush right. His prediction that there would be no dire consequences from the Obama fiscal policies is panning out.

Maybe I am a troll. Maybe I am just trying to add a little unrelated DNA into this incestuous conclave.

Who’d a thunk it!

Warren does not have a drop of Indian blood in her veins. Ted Cruz has no resemblence to McCarthy. Your comments show that you are an idiot.

Oops, not opps.
How much is media matters paying you to troll?

C’mon. Paul Krug deserves to be paid based on his merit and achievement.

His grandparent came to the US from war-torn Poland in 1922 for a life. Their children (Krug’s parents) were able to achieve the American dream by buying home on Long Island and sending their son to Yale (an impressive achievement).

Krug has degress from Yale and MIT and a Nobel Prize. So why shouldn’t he be paid based on his achievement and abilities!.

Wait….isn’t he advocating that all his merit means less than a cup of beans…. that equality of income trumps individual ability….

ha….what a zero. Although a truism, it bears repeating that hypocrits do not mind hypocrisy.

I also love that NYC Chief moonbat-tax-raiser Warren Wilhelm, aka, Bill DiBlasio, paid tax at a rate of less than 9% for 2013. Another clown

If your profession is pontificating, wouldn’t you have to be correct now and then to have merit and achievements?

Krug-tron actually was right about the internet. Its impact indeed has been as big as that of the fax machine.

Of course, the fax machine was revolutionary.

Sending documents across the country in less than three minutes? Secure transmission from you to the other person? Clean copies that you could use in your business?

I think that’s right about the time, if the USPS had been a private business, that all the forward thinkers on Wall Street would have shorted them.

The fax machine in its heyday was as important as the telegraph and the telephone.

So, the key to getting paid handsomely is to “play a modest role” in an enterprise. I’ll have to try being more modest, then.

Whatever happened to diversity?
There aren’t any minorities available for such low wages?
Why is it always the white guy who gets the 1%er money?
Come on Paul, turn them down so diversity can soar….

The freak here is not Krugman, who has beclowned himself into an icon of idiocy similar to Biden, but CUNY, who is paying out the money.

Is he as stupid as he looks?