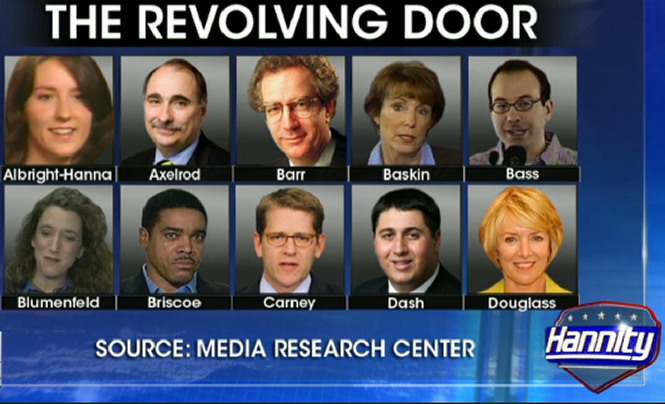 The Obama administration’s relationship with the media is hardly and adversarial one. In fact, at times it has seemed more like a partnership and there’s a logical explanation for that.

A surprisingly high number of people have moved back and forth from the media to the White House. Glenn Reynolds has often pointed out the revolving door.

Brent Bozell of the Media Research Center recently appeared on the Sean Hannity show to provide an update on this issue.

HANNITY: We’re doing great. Revolving door, not uncommon. Sometimes it happens. But this is, what, above the normal average?

BOZELL: Yes. This is out of control. We’ve been looking at this since 1987. And that revolving door is always there. It’s always predominantly liberal Democrats going into politics or going from politics into journalism. But in the last several years it’s on steroids. We just came across our 30th major player who has either left journalist to go work to support the Obama administration or has left the Obama administration and now calls himself or herself an objective journalist.

Featured image is from the video.

Classically trained professional journalists with the highest ethical standards or “some blogger”.

While that line might seem to be a cheap snark, it is far more serious than that. A free, unbiased press is critical to any democratic society that wishes to to remain free and self governing. Participatory democracy, without informed voters, will fail and the result will be a totalitarian state.

The premise of the comment was that the “legitimate” media are the outlets that are happy to be used by those in power (provided they are Democrats) to advance an agenda. Any journalists who think it’s their job to ask questions about Democrat policies are, of course, not “legitimate.”