I saw this coming from a mile away.

Karl apologized because while he had made clear elsewhere in his report that these were summaries, he was not sufficiently clear as to this single email.

I smelled a rat in the release by the White House of this one email. It looked to me like Tapper, although a great and fair reporter, was being played, that someone in the White House found a difference in the wording, leaked only that email, then used it to generate a fairly massive counter-attack on the entirety of the reporting.

And I so wrote, Was Jake Tapper played by White House through selective leak of just one email?

Jake Tapper reports that the White House is disputing that the Benghazi talking points were edited in the way ABC News and The Weekly Standard presented them, leading to charges that the emails were doctored. The ABC News source is standing by the leaked emails.

Based on Jonathan Karl’s updated report (quoted below), it looks like the White House played Tapper to create a controversy by releasing just one in a chain of emails.  Regardless of how it turns out, this provides the dodge White House defenders were looking for, and they are relishing it.

When White House Communications Director Dan Pfeiffer appeared on Sunday talk shows and repeated the “doctored” narrative, it had come full circle. A “senior aide” (Pfeiffer?) leaked a single email to Tapper, the media and other Obama supporters used that planted narrative to bash the entirety of the Benghazi talking points reporting, and then Pfeiffer went on talk shows and drove home the “doctored” narrative.

But that “doctored” narrative has fallen apart substantively once the actual emails (100 of them selected by the White House) were released.  Hayes and Karl wrote persuasive defenses of their reporting, as have others. Jazz Shaw had a good explanation of why the “doctored” narrative does not hold up, About those “doctored” Benghazi e-mails…

In early May, Stephen Hayes of The Weekly Standard reported more details on the e-mails, in some cases explaining which officials were involved. But a central focus of his article was on the different versions of the talking points that emerged from the interagency process. Hayes, in most cases, summarized the e-mails unless quotes were in the House report.

Then, on May 10, ABC’s Jonathan Karl reported that there were 12 versions of talking points, under the headline: “Exclusive: Benghazi Talking Points Underwent 12 Revisions, Scrubbed of Terror Reference.” That was the key focus of the online article, as well as Karl’s appearances on the broadcast network that day. Karl, in fact, got all 12 versions of the talking points correct.

Later, he referred to “summaries of White House and State Department e-mails” and then lower in the article quoted from those e-mail summaries directly. As worded, the article gave the impression that these were actual quotes from e-mails.

“We must make sure that the talking points reflect all agency equities, including those of the State Department, and we don’t want to undermine the FBI investigation.  We thus will work through the talking points tomorrow morning at the Deputies Committee meeting.”

On May 13, CNN obtained the actual e-mail written by Rhodes, which said:

“We need to resolve this in a way that respects all of the relevant equities, particularly the investigation….We can take this up tomorrow morning at deputies.”

Note the correct version is missing a direct reference to the State Department. CNN, which had only obtained the single e-mail, used strong words in its report about its competitor, ABC: “Whoever provided those accounts seemingly invented the notion that Rhodes wanted the concerns of the State Department specifically addressed.”

When the White House last week released all of its e-mails, it became clear that Rhodes was responding at the tail end of a series of e-mail exchanges that largely discussed the State Department concerns.

That, of course, has not stopped operatives like Media Matters from acting as if this were the journalistic scandal of the century: 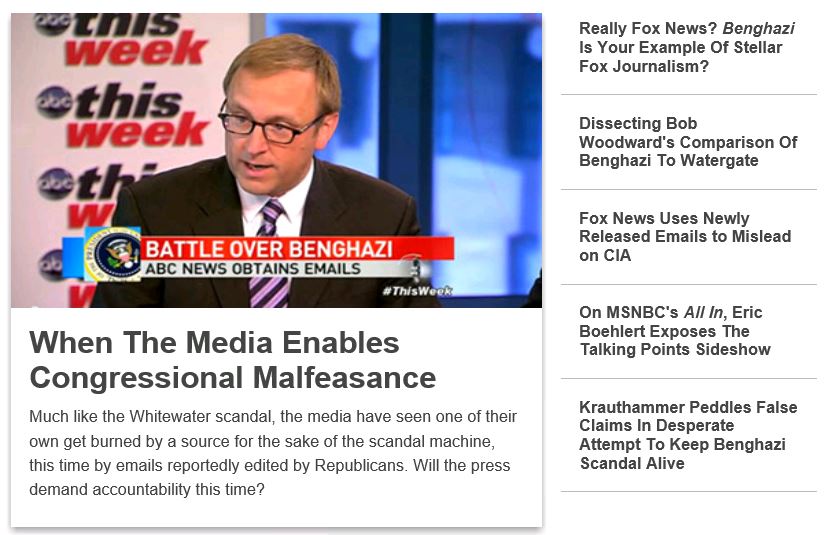 Kessler notes that the disputed reference to the State Department was not even important, but that the White House continues to cite Tapper’s reporting of the email and also reporting by CBS News to claim that the difference in wording constituted “doctoring”:

While the White House has tried to highlight ABC’s error on the Rhodes e-mail, it is worth noting that it did not play a prominent role in much of the news coverage. (The one exception is Fox News.) After the ABC report, the Rhodes e-mail was not part of the nightly newscasts; neither was it cited in the news reports in The New York Times and The Washington Post. USA Today and The Los Angeles Times mentioned Rhodes, but at the bottom of the story. “Ben Rhodes, a deputy national security advisor at the White House, wrote in a subsequent email that Nuland’s concerns would have to be taken into account,” the Times said.

There you have it.

A very, very minor difference in wording between the summary reported by Karl and Hayes, which was non-substantive because the summaries were correct in the context of the email chain, was used by the White House to leak a narrative via Tapper which then was used to attack all the reporting as “doctored.”  The White House then used the narrative it planted in the media to bootstrap on the reporting to justify the narrative as a political talking point, to which it clings based on that same reporting.

i would think that Karl’s perception of the White House has changed after this.

Well, that would be a B-52 load of bomb-shells in Benghazi.

Every bit of that is speculative at this point, but…boy…

Drudge says there is yet another Obama administration corruption/crime shoe to drop.

Hope it all comes to light, undeniable, bright clear light.

None of this is ‘scandal’ it’s pure old criminal abuse of power.

I hope it is so big that he is impeached. He is not likely to be impeached over IRSgate because the Senate Democrats encouraged the persecution of Conservatives. On Benghazi, the operation to protect Hillary is also protecting him. Whatever it is, it will have to be big enough to tie Obama directly and to show plainly he was acting contrary to US interests. We will have to have video.

In the NEW racist America, maybe no black fascist CAN be unpopular…

But their PARTY sure can be.

Sounds like invited error, to me. And, they actually came up dry for an error.

Is there any lie that Obama and his henchmen won’t tell? Is there any depth to which they won’t stoop. They let good people die, they persecute the innocent and ruin reputations and livelihoods of political opponents. These people, Obama and his official apologists give us a new standard for moral depravity and situational ethics. It looks like the chicken of, “character does not matter”, has come home to roost in our country.

Wouldn’t this be the contrast to “Fake but accurate”? That being “Inaccurate but True”?

It is exceedingly difficult to hurl mud with accuracy, so some of it doesn’t stick.

Back in the day, this same technique was used under Bush, when Cheney leaked to Judith Miller about something to do with WMD, then after she wrote the story went on Meet the Press and said there were reports in the press about the very matter.

The Obama people have learned well how to play this cynical game, even as they create the opposite image. The Wizard of Oz would be impressed.

We should take account that each side is manipulating and this takes away our ability to understand the issues on their own.