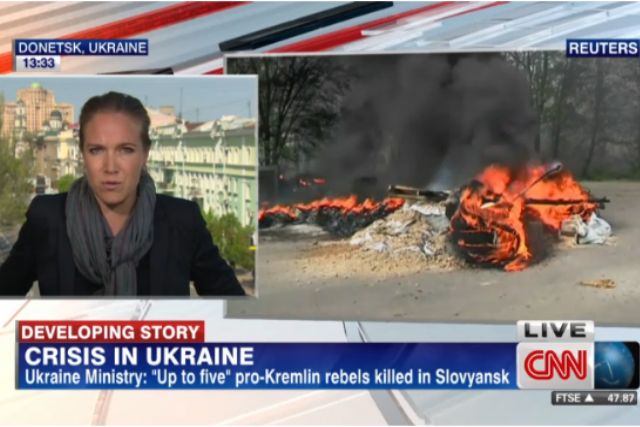 Russia on Thursday announced that it would begin military drills along the border of Ukraine, as the crisis there has continued to escalate in recent days.

Ukraine’s Interior Ministry said Ukrainian forces killed the five militants during operations to take down pro-Russian activists’ roadblocks around the city of Slavyansk.

The Russian response was quick to come.

Russian President Vladimir Putin said that “if the Kiev regime has started to use the army against the population inside the country, it, beyond any doubt, is a very serious crime.”

It would “have consequences” for those making the decisions, and for relations between the two governments, Putin said at a media forum Thursday, according to state TV channel Russia 24.

“We are forced to react to such a development in the situation,” Shoigu is quoted as saying. “Starting today, exercises of battalion tactical groups from the Southern and Western military districts will begin near the borders with Ukraine.”

Russia’s announcement comes after Ukraine has resumed a crackdown on pro-Russia separatists who continue to set roadblocks and occupy government buildings in areas of eastern Ukraine, as an earlier truce fell apart.

In separate news on Wednesday, a contingent of U.S. Army paratroopers also arrived in Poland as part of a series of military exercises to occur in four countries across Eastern Europe, where they will maintain a rotational presence in the area. The U.S. has previously discussed ways to strengthen its NATO alliance with countries in the area as the crisis in Ukraine has continued.

Meanwhile, President Obama on Thursday warned again that the U.S. is poised to impose new sanctions against Russia.

President Obama said Thursday that new sanctions targeting Russia are “teed up” in the wake of a fresh warning by the Russian foreign minister that attacks on Russian citizens or interests in Ukraine would bring a firm response.

Obama said Russia has not abided by the spirit or the letter of an agreement reached in Geneva last week that aimed to ease tensions in eastern Ukraine. He said Russia has failed to halt aggression by pro-Russian militants in the region.

Still, he cautioned that the United States needs to secure the support of allies to ensure that additional economic pressure is even applied. He conceded that new sanctions may not change Russian President Vladimir Putin’s intentions and that the crisis in Ukraine may not subside.

In the weeks most startling EU development , Cameron has seen the polls & has decided he is a Christian. Yes , a christian & not just any working class. Brit one but an Evangelical christian .

Blair is throwing the Jihadis under the tube because Assad is now winning with an end in sight . He is even bringing in the necessary pact with Russia to stem the expected remnant Jihadi move into Europe.