Report: New Yorkers Forced to Choose Between Groceries and Obamacare

Report: New Yorkers Forced to Choose Between Groceries and Obamacare 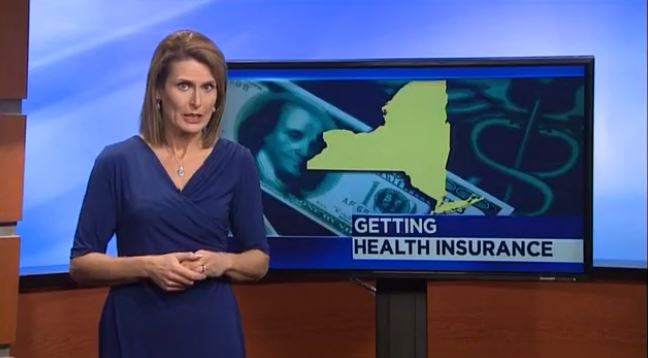 A new report from WHEC in Rochester is painting a very bleak scenario for New Yorkers, some forced to choose between buying groceries or purchasing Obamacare plans, some concerned about going bankrupt after falling ill.

So why are New Yorkers concerned about going bankrupt due to Obamacare? Especially when the President has continually made such statements as, “I am as proud as I’ve ever been by the work we did to make sure that in this country, if you get sick you don’t go bankrupt and that you can get the health care that you need”?

And why are they choosing between basic necessities and an Obamacare plan when the President has claimed many people will be able to find plans that are cheaper than their cell phone or cable bill?

The Affordable Care Act, simply isn’t affordable.  In fact, many New Yorkers are opting to pay the fine because they can’t afford the high premiums from Obamacare.

People are choosing between groceries and health insurance. People are worried about going bankrupt if they get sick. News10NBC is hearing dilemma after dilemma from New Yorkers signing up for coverage under the Affordable Care Act.

A lot of people have been complaining on News10NBC’s Facebook page about facing a fine if they don’t sign-up for health insurance. Many say they can’t afford the premiums or the deductibles and it would be cheaper to stay uninsured and pay the penalty.

WHEC also mentions the March 31st deadline, saying you could face a fine if the deadline is missed.  They report that the “deadline stands.”

“Today’s ObamaCare deadline may as well be written in sand, because different states now have different deadlines,” he said.  “The only thing we know for certain about ObamaCare is the website is a disaster and that the White House hasn’t been transparent about how many people have paid their premiums, which would officially enroll them into the law.”

Indeed, the Washington Post has reported that the deadline will be extended to some time in mid-April, and nobody will be asked to cite a specific reason for being unable to enroll by the March deadline.

That said, New Yorkers seem more concerned with the costs associated with Obamacare.

Marian Schrader, a navigator paid to enroll people in the Obamacare exchanges tells WHEC that when people hear about the costly premiums, they decide not to enroll.

Watch the full report below…

Cross-posted at the Mental Recession

So? A victory in America’s War on Obesity, then. The virtues of the ACA just keep piling up. /s

Let. It. Burn. When the ashes cool, we’ll salvage the parts we like and jettison the 99% that hurts us.

“When the ashes cool, we’ll salvage the parts we like and jettison the 99% that hurts us.”

Spoken like a true sociopathic 1%er (but I repeat myself).

It is very difficult for Downton Abbey gentry Democrats to understand that paying a high premium PLUS $6000 deductibles PER family member, plus co-pays, with restrictive drug formularies and medical networks before the garbage Obamacare health insurance policies pay one dime is essentially sunk costs every year for people who have to worry about feeding themselves. Elitists at Whole Foods cannot imagine choosing between organic bananas and an antibiotic for their child because they have never had to do so. This is why you don’t allow them to run your government or take over a sixth of the economy for kickbacks in perpetuity.

ALL Collectivist forms have as a central theme their war on, and hatred for, the middle class.

Why don’t you leave your bunker some time and look for actual facts instead of basing your comments on your ideology. Here’s a hint: Many of the people who support Obama ARE middle class.

Yes, they form the backbone of the tea party and this site is chock full of them. They prefer ideology to facts. They reinforce each other because any time they leave the confines of this site they must confront reality – a scary thought.

Read, darlin’. Don’t ever take my word for it. You’ll ample evidence for what I said, both from the leading “thinkers” of Collectivist systems over the years, and from what the Collective actually DOES when given the chance.

You are an useLESS idiot, and by your choices.

“Elitists at Whole Foods cannot imagine choosing between organic bananas and an antibiotic for their child because they have never had to do so.”

Same thing for the sociopathic 1%er Republicans. They think the trust fund will pay for it.

Yeah, but don’t people know that the costs – whether the fines or the premiums go to pay for Obama’s and the Dem’s feel-good legacies. John Kerry is trying to do the same with the climate change scam. We must chip in for their glory.

And don’t forget: We are all supposedly victims of something – the health care industry, global warming, white men, rich people, work, the ‘rigged’ system…

The Dems need you to be victims so they can be your savior. They also need legacy bills and libraries filled with fond memories to be immortalized, so that the world will remember how much Hope and Change they brought into our little gulags.

And, I’m sure their will come along a national sales tax which is ‘meant’ to pay the salaries of climate change gurus who will ‘out-think’ climate change before the Great Apocalypse happens.

Before the midterm elections, voters will have the experience of having months of paying or not paying their premiums, having met or not met their deductible or having seen their employer benefit packages for next year.

A word to the wise: this year the tax penalty may be low, but, as it grows over time, those without government approved insurance should consider changing their W-4s to avoid under withholding penalties. The law requires that you pay next year’s taxes this year.

Of course no politician saw this coming. The rest of us live on real budgets and are restricted by real math. We don’t get to ignore budgets, raise the debt ceiling, raise taxes and print money to run our households. We don’t get to reward our friends with tax money or pass legislation that will make us rich. We don’t get to vote ourselves a pay raise or to jet all over the world on the public’s money. Politicians don’t know what “affordable” is.

Hey, New York, you voted for that!

Buying groceries? Who on earth does that when you have SNAP? Snap!

Harry Reid says all of these New Yorkers are lying.

Nope, but WHEC may be. Perhaps you can explain the twisted, tortured logic that got you to you ‘conclusion’?

“some concerned about going bankrupt after falling ill.” Was this a scientific poll or did they send some flunky out on the street to hunt for the fabled low information conservatives? People that are worried about going backrupt after getting ill are better off with no insurance at all? That is irrational.

BTW, NY has extremely generous Medicaid and SNAP programs. So the people worried about not having food or health care must be paying attention to sites like this instead of the state government and the numerous non-profits that are doing outreach. When these people get sick, the ideologues on this site can donate to them. Isn’t that Paul Ryan’s plan? But I would guess they will wag their fingers and blame the victims.

The quote was: “People are choosing between groceries and health insurance. People are worried about going bankrupt if they get sick.”

That is a totally rational concern, given that we cannot provide ourselves with catastrophic health policies under ObamaDoggle.

Remember the lie on which ObamaDoggle was sold? We do. It was supposed to eliminate “free riders”. Instead, it is making them institutional, as you warmly approve.

Funny, Elizabeth Warren asserted that many people go bankrupt from health expenses and YOU said you had never handled such a bankruptcy. Which is it?

Besides just because they fear something doesn’t mean it is true. Maybe then just heard to much bs propaganda from people like you.

Just do me a favor and stop looking in the mirror while you compose your insults.

The quote was: “People are choosing between groceries and health insurance. People are worried about going bankrupt if they get sick.”

That is a totally rational concern, given that we cannot provide ourselves with catastrophic health policies under ObamaDoggle.

Remember the lie on which ObamaDoggle was sold? We do. It was supposed to eliminate “free riders”. Instead, it is making them institutional, as you warmly approve.

“Elizabeth Warren asserted that many people go bankrupt from health expenses and YOU said you had never handled such a bankruptcy. Which is it?”

Both, moron. Deal with it.

And then deal with the issues I raised.

PLUS, they CANNOT bankrupt around IRS claims for healthcare costs under ObamaDoggle. SO their estates are just GONE as far as their heirs are concerned.

“Start up” your fat ass.